...are nowhere to be found in the Provo/ Orem area. Well, okay, that's not entirely true, but Bryan and I did spend two hours tonight going to around ten stores looking for a decent maternity sweatshirt and still came home empty-handed. At least it was sweet of him to take so much time helping me look.
Posted by Katie Lewis at 11:29 PM 4 comments

Ta-da! You are all now welcome to visit the official Sammy Jaybird blog to view the products, prices, and beautiful logo (designed by the wonderful Nancy Jones. You can look at her great stuff here.) While I'll admit that the pictures are... not so impressive, I've had so many requests to post pictures that I thought I'd better go ahead and just put some up already. If the weather stays nice and the babies are happy and available, much nicer pictures with babies inside the onesies will be up within a week or so. Anyway, without further ado, you can click here to visit the Sammy Jaybird blog. Enjoy!

And please- spread the word! Ten points to anyone who makes a post on their blog about the Sammy Jaybird blog. Thanks for all your support! Enjoy the pictures!
Posted by Katie Lewis at 9:31 PM 2 comments

Anna's money saving blog "Too Poor to Eat" impresses me every time I look at it. You should look at it too. Click here.

P.S. I have not given up on Sammy Jaybird yet. More news to come.
Posted by Katie Lewis at 1:20 AM 1 comments

Please e-mail me at kathleenann08(at)gmail(dot)com for current rates and information.  I accept only those businesses and products which I feel are a good fit with my blog, my style, and my readers.  Thanks for your interest!
Posted by Katie Lewis at 11:29 AM 0 comments

A bit about me: 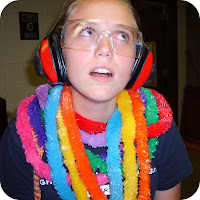 Hi! I'm Katie Lewis, a stay at home wife and mother who loves to create. Here on Notes From A Very Red Kitchen you'll find some fun sewing and craft tutorials as well as some general ramblings from yours truly. If you ever have a question, personal comment, or you noticed some embarrassing typo in one of my posts, please feel free to drop me a line.

Sponsor Info:
Interested in becoming a sponsor?  Just shoot me an e-mail and tell me about your shop.  We'll work together from there.

People keep asking which means I must not have said so in the first place but... we got a new car! Actually, we got the new car a couple of weeks ago, so sorry for the old news. Anyway, it's a 2008 Kia Optima, still under its 5 year warranty, champagne (gold) color. It's nice and roomy and we like it. Hooray! Anyway... umm... that's all.

I feel like this is an appropriate picture with the trolley in the background since our last car was totaled on the way to San Fransisco.
Posted by Katie Lewis at 8:46 PM 5 comments

It's a good thing babies are usually cuter than plants

...or else I don't think ours would live very long. Yesterday when I was cleaning I found two very neglected plants sitting in shadowy darkness, looking very pale and sickly. I rushed them into the kitchen for some emergency water and sunlight and they now have "a little color" as they say in that wonderful movie where Sandra Bullock dips her Oreos in the milk in her cat's food dish. (Five points to those who can name the title of that movie.) Anyway, but as I was sitting here looking at blogs and checking e-mail and pretending like I never get on Facebook I was thinking about that- that babies get more attention than plants, that is.
Posted by Katie Lewis at 4:54 PM 6 comments

Well, this evening I took my second real step toward trying to sell my products (the first real step being when I collected business cards and stuff the other day). I worked all afternoon and evening on samples (onesies and clippies) and barely made it to the store in time to drop them all off with my pricing list and everything. Luckily the owner is staying in town for an extra day which means she'll get to look at my stuff herself instead of having someone describe it to her over the phone or send her pictures or something. Anyway, I think they'll let me know within the next few days. Eeek! :) I think I would really enjoy selling to this store. So far all the employees and the owner that I've talked to have all been super nice ladies. Think happy thoughts for me!

P.S. The title of this post was just a joke. I went with my favorite of the brand names- Sammy Jaybird (copyright). Thanks for all of your input!
Posted by Katie Lewis at 10:26 PM 11 comments

Picking a Brand Name: Not as easy as picking your nose

So I was at a baby shower a week or so ago where I had taken as a gift a set of three white onesies which I had sewn felt pictures onto (an owl, a car, a star- boy baby shower). I have given away similar onesies before, but mostly to family members and ward members who aren't quite as posh. I was a little worried taking this handmade gift to a baby shower for a girl who I knew wasn't quite as homespun as I am. I was relieved when she opened them and was genuinely smiling. And then I was thrilled when she passed them around to her friends in designer clothes and they went absolutely nuts over them. Several commented that I could sell them--an encouraging comment from the ladies who have the money to buy designer things. That really got me thinking.

Last summer Bryan and I sold homemade granola at the Provo Farmer's Market and we did pretty well, except I got super tired of making granola and we didn't make a huge margin of profit since the ingredients were spendy, even when buying bulk. I took my possible lack of enthusiasm into consideration as I started thinking about committing myself to making onesies and here are the pluses: I can do it sitting down. I can stop in the middle of something (unlike the granola which I had to be present since the oven was on and the granola needed to be stirred halfway through baking-uhg). The materials don't expire. The only real cost of materials to consider is the onesies themselves since I already have a large bag of felt and to replace it is only about 20 cents/ sheet. The downside is that I typically make a mess of the couch while I am working on them since I mostly work from very small scraps.

When I was in San Francisco a couple of weeks ago I saw some hair clips that were made of felt (and a hair clip) and they were pretty adorable. I borrowed some of my niece's hair clips to experiment with and I made a flower, a bird, and a popsicle. They turned out pretty cute AND my niece loves them. And they would be even cheaper to make than the onesies since the only real cost of materials there is the clippies themselves.

So I thought this whole thing over for a little while and discussed it with Bryan and yesterday we/ I went around to kiosks in the mall and a few of the baby boutiques here in Provo collecting business cards and information about how the stores typically went about buying from new sellers (such as myself). The store that was the most helpful/ informational about it said that at their store for a sample presentation they require samples of the products, the cost I would sell them to the store for (then they double the price), and my own brand name and tags. Since I have made these things before I'm not worried about samples and figuring out the cost seems simple enough, but I feel utterly inexperienced when it comes to creating a brand name and tags. And so I am looking to all of you eager readers for great ideas.

Bryan and I spent a while thinking up names last night and this is what we have come up with. So far my favorites are Sprused Goose, Filz, and Sammy Jaybird. Please feel free to vote on your favorite(s) or to please please come up with your own cool name and give it to me free of charge. (By posting it on here I will assume you are giving it to me free of charge and will never expect any reimbursement for your genius idea. After all, it's not like I've sold anything yet. Also, if you are reading my blog and you steal one of these names I will come after you for money because you did not think of it meanie head.)

Also, if you have any cool ideas for design free of charge (or maybe for some free samples of onesies and/ or clippies) let me know. Maybe we can work something out.

P.S. I will try and post some pictures of the actual products soon since many of you have never seen them before and have no idea what I am talking about. Thanks everyone!
Posted by Katie Lewis at 12:19 PM 12 comments