Well, Bryan was lucky enough to get to shadow an optometrist today from 8-12, so it just seems like a weekday to me so far (wake up to Bryan kissing me goodbye as he rushes out the door, get up and look at blogs for a while, think about working on my sewing project). I am going to work on my sewing project (the bean bags, of course), but I thought before I did that I'd share a couple of other things I've made lately for all of you to enjoy. 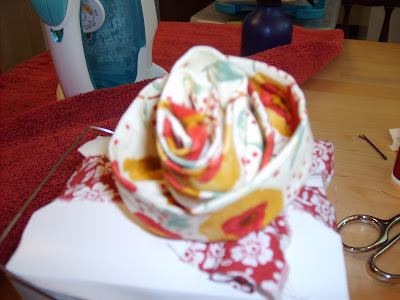 First of all, here's a fabric flower I made for my sister-in-law Lisa for her birthday last week. You can find the tutorial for it here on Little Birdie Secrets. It took a little longer than I was expecting, but it was still pretty quick and easy. I had originally planned to sew it onto a bobby pin, but the flower was heavier than I thought it would be, so I sewed it onto a sturdy hair elastic instead. I think it turned out pretty well. 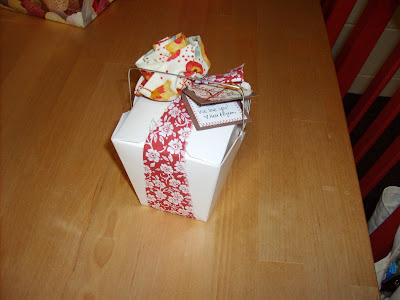 I had already wrapped up the homemade soaps we got for her at the Provo Farmer's Market (It's still going until the end of October!) in this fun little box, so I topped it off with a piece of scrap fabric for the ribbon and tied the flower to the top. Oh, and I also made a matching tag by sewing a scrap of fabric to the top of the card. So easy... especially since the sewing machine and all the scraps were out on the table anyway! 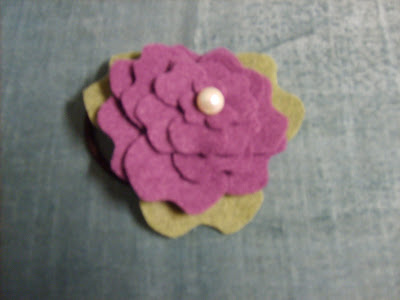 Secondly, here's another flower I made from this tutorial at Yoonie At Home. (It may take a minute for that page to load if you just clicked on the link, fyi.) This flower really was as fast and easy as it seemed. The most time-consuming part was cutting out the pattern pieces. Then you just pile them all up and sew through the middle! The best part: no seam finishes and no ironing! These two things are always a major plus for me in crafts since my sewing machine and iron live tucked away in the back closet when they're not being used. There's just not enough space in our apartment to keep them out all the time anymore. Anyway, I used an extra (fake, of course) pearl bead in the middle instead of a button. It just seemed classier for this one, especially since it was going as part of a wedding present for my friend (the one who I gave those millions of t-shirt bags to). Once again, I sewed this flower onto a sturdy hair elastic instead of a clip and I tied it onto the handles of the bag as a finishing touch to the wrapping job. (Sorry, no picture of that.)

Well, that's all for now. I've been taking pictures along the way so I can share a tutorial with you on how to make the alpahbet bean bags I've been working on, so you can look forward to that soon!
Posted by Katie Lewis at 10:40 AM

so, does brian want to be an optometrist? Did you know that is what erick is going to school for? I'll put in my 2 cents about SCO...it is a fabulous school, and i'm not 100% sure, but 99% sure that it is one of the most inexpensive too...just a little fyi.

Oh sweet. Thanks Jen! Yeah, Bryan is planning on going into optometry. I'll be sure to tell him. And if we have questions now we know who to ask. :)

Katie,
I was checking your blog to see if you've had your baby yet ;) Cute crafts:D I too am obsessed with fabric flowers ... mainly just collecting the how-to's since I haven't actually made one yet ;) Maybe the new baby will inspire me to actually make one for a headband. Anyway, I happened to randomly notice that you have Charisse Brownlow on your blog roll-- she is my cousin by marriage. Kind of random how small the world is :)

Oh funny! Charisse and I used to work together. She is fabulous. Also, I have not forgotten about our little photo shoot yet, I just haven't had the baby yet either. Hopefully it will still work out by the time she gets here! :)