I Just Caught A Whiff 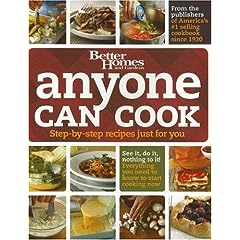 Disclaimer: real women can skip this post. It's just the thoughts of a novice.

I feel like I'm coming out of the cloud I've been in for the past nine months. It was one of those icky clouds where good food smelled bad, I was eating (motivated by near starvation, it seemed) about every half hour (and going to the bathroom at least as often), and somehow feeling a complete lack of energy or motivation to do much of anything. Then, yesterday, I hit a point where I wanted to make real meals and be somewhat of a real homemaker. If you've known me at all while I was pregnant you realize what a big deal this is. I really only cooked a handful of meals the entire nine months.

I think this desire to feed my family was triggered by Bryan's remark about what he took for breakfast and lunch yesterday. I won't tell on him, but let's just say I want my wonderful husband to have more nutrients than that, especially when he's working hard in his schoolwork and being really nice to me (i.e. getting up with our baby girl during the night). So, for family night last night I gave a lesson on the importance of eating good meals. (This was in no way a lame guilt trip as it was as much- or more- for my sake than Bryan's.) I started by reading "Six Dinner Sid" by Inga Moore. (Why is it my family night lessons are always portrayed through children's literature? Someday when I have teenagers I might have to grow up and do something else.) Then I read a few things I found on lds.org and Bryan and I discussed how much easier it would be to eat healthy if we plan ahead.

Next, I had Bryan write down a list of things he'd like to have in the lunches he takes with him to campus. Hopefully this will help me pack foods for him that will make him happy instead of the random stuff that sounds good to me. So far so good. Then we perused a few of our favorite cookbooks and took note of some of the meals that looked good (and reasonably easy). We wrote down the name of the meal, the title and page number of the cookbook the recipe was found in, and a list of the ingredients (and amounts of each) needed. This way we could do a quick check to see if we had everything. This method wasn't really planned, we just kind of did it that way. But after we had realized the greatness of our method we decided to preserve it. In other words, I'll be copying what we wrote last night (on just plain old computer paper) onto 3 by 5 cards so we can use these for dinner ideas in the future.

Also, get this, we even planned side dishes to go with each meal. Now I know this may seem like a bit much. After all, up until this point in our marriage we have generally only planned side dishes when company was coming, but I thought it might be time to step things up a notch. Well, that and the first recipe I wrote down had side dish suggestions with the page numbers of their recipes and that sounded good, so I figured, "why not?"

Then I went over to our calendar...

I must side track for a moment and brag about our calendar. Credit for this idea goes to my friends Stephani and Todd since we got the idea when we saw it in their home during our Thanksgiving visit last year. The idea is genius. Or at least Bryan and I think so. Rather than splurge on a fancy wall calendar, they got a regular big desk calendar and hung it on their freezer door. (We did this by using 3M sticky tabs- oh how I love those.) This puts the calendar in a place where it will actually get looked at and used every day instead of off on some wall where you can actually hang it up. I may never go back to regular calendars. Unless I get one of those cool new fridges that has the freezer on the bottom or has two long skinny doors instead of the short freezer door on top and the... nevermind. Back to meal planning...

As I was saying. Then I went over to our calendar and actually wrote the meals (and side dishes!) down on the calendar so I'd know what ingredients I would need to buy and how soon and so on and so forth. For this week I planned three days of prepared meals and then a day of left overs and a day of whatever (Saturday). I feel excited.

Final step: grocery shopping. Luckily my wonderful sister who happens to live in the same stairwell I do (how convenient!) offered to watch my baby girl for me while I went to the store last night so Bryan could keep working on his not-so-fun chemistry homework. Or perhaps when I say sister I mean brother-in-law who was even so kind as to change her poopy diaper while she was there. Thanks guys! I sped through the grocery store as fast as I could picking up the things we needed for meals for the rest of the week as well as some of the lunch foods that Bryan requested. "Shopping" is already on the calendar for Saturday, so there was no need to buy ingredients for next week's meals.

This has resulted in prepackaged (by me) lunch food for Bryan today and the wonderful smell coming from my kitchen. Today's menu comes from the cookbook "Anyone Can Cook" from Better Homes and Gardens. This is basically the dumbed-down version of the Better Homes and Gardens cookbook with the red and white checked background on the cover, you know the one I mean. Anyway, despite my having majored in Home and Family Living and having taken a number of cooking classes, I still prefer the easy stuff. So I secretly love this cookbook. Why? Because it has pictures of almost everything. My favorite. Anyway, today's menu: Salsa Swiss Steak and Cornbread. The steak is already simmering away in the crock pot and the cornbread is all served up in a muffin pan, ready to get popped in the oven (just in case my baby girl isn't asleep when it's time to get dinner on the table).

Hooray! Perhaps I'm on my way to being somewhat more of a real woman. Let's just hope the prep for tomorrow's meal runs as smoothly as today's did. And that everything is actually ready at the same time. Isn't that just the hardest part of preparing meals? You know, other than deciding what to eat and actually spending the time to make it. Okay, the end.
Posted by Katie Lewis at 4:50 PM

Awesome, awesome...I need to get to planning ahead more too...and planning more side dishes.

One piece of advice though...plan shopping for a different day...the grocery stores are always crowded on Saturday.

And your recipe sounds good...I should send you some of my easy ones. :)

Oh...and I wonder if what Bryan took is as bad as what Eric takes when I don't have leftovers for him...oats...just oats...not cooked...and sometimes he tops that off with peanut butter.

Or the famous raw potato.

The meal that I took for breakfast and lunch was poptarts (one for breakfast, the other for lunch). Granted, I woke up 20 minutes before class started and didn't have time to prepare anything great. I usually do eat well.

i think you're already a real woman, but i'm glad you're feeling well enough to step up your domestic skills.

i love planning my meals ahead too. i used to put them on the calendar too, but then when the day came i didn't always feel like eating what was on the menu, so now i just plan for 5 days and decide the night before what i want to take out to cook. i don't cook on weekends usually, since we're often going out or at friend's or family's houses for meals then.

oh man. I wish I had read this before coming over for dinner. I would have made lots of awesome comments, like "wow, Katie! You are so home-makey" and "Nice calendar! I wish I had one juuuust like it." But since I didn't, I will say them here. Dinner was fabulous. I usually just cook on the weekends and then try to stretch it out. I always thought when I get married it'll be easier to be motivated to cook real meals. I don't think that's going to be true...

I had the hardest time cooking when I was pregnant too. We went out to eat all the time because I just couldn't do it. Meal planning is the best though. It saves so much money and makes things much less stressful during the day when you already have a decision made. Also, you are probably one of the most home-makey ladies I know. You are always sewing and making things. Good luck with your new experiment!

You have got to quit confusing Chris with Kendra. Wow, Chris gets big-time son-in-law points. Go Chris.

Way to go on the FHE lesson and meal planning! Hmmm...now I have some ideas for Christmas!

Yay go Katie!!! I'm glad you like the cookbook, because if I remember correctly, I got it for you for your bridal shower! :)

oh sweet- thanks whitney! i knew somebody gave it to me as a bridal shower gift, but i couldn't remember who. thank you! thank you!

I'm trying to get my friends to hand over recipes for all the kind-of easy meals they make during the week. I don't enjoy cooking much and my husband and I have completely different tastes (he likes spicy mexican food). I'm thinking that if I start churning out some more American / Mexican-style dishes he might complain less...

Why he didn't just marry a Mexican lass, I don't know.