We're staying home for Christmas this year (instead of going to one of our parents' houses) and, although I was bummed about it at first, I'm really looking forward to it now. I'm looking forward to it so much, in fact, that I've started making a list of all the things I want to do over the Christmas break. One of the things on that list is to make gingerbread houses (hopefully with our friends/ neighbors who will be spending the holidays here as well). The catch is: I've never made a gingerbread house before. At least not a real one. I've made them with graham crackers, of course, but it's not quite the same. Anyway, I figured if I was going to do it right, I should probably do a practice run- you know, see how the recipe goes and everything. So, long story not so short, I decided to practice the whole thing on this Halloween (gingerbread) house. In my head it was definitely going to be a lot more spooky. Umm... right. As you can see, it turned out quite a bit more whimsical. And I was going to make a nice little green coconut lawn, but I finished the house and I was kind of just feeling done with the whole thing for now, especially since Halloween is this Saturday, meaning this lovely isn't going to be around that long. Anyway, here's the house in all it's not-quite-so-spooky glory. 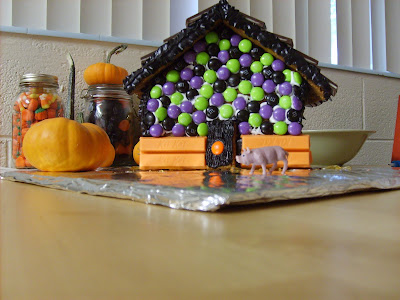 I decorated the front with some cobblestone (Halloween plain M&M's). The lovely orange siding (Halloween Kit-Kats) goes all the way around the house. 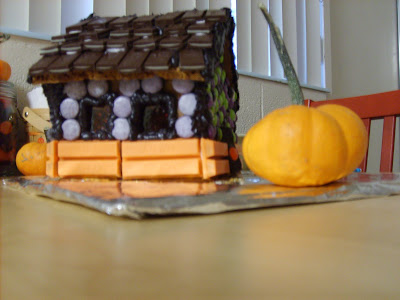 The roof is made of Andes mints- two boxes worth. The sides are adorned with a slightly larger stone (purple Spree). The windows are made of tinted* glass... errr... I mean candy. 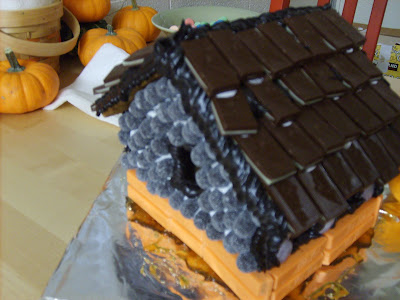 The cobblestone on the back is black gum-drops. I like the way it turned out, but I certainly don't plan to eat a black gum drop any time in the near future. 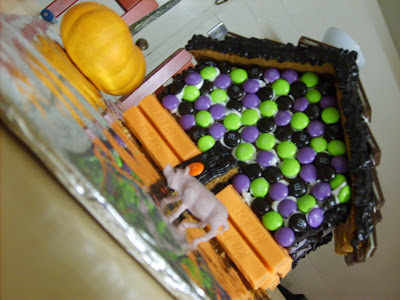 Bryan added the pig.
(I found him (the pig, not Bryan) in the Macey's parking lot a while back. Usually he lives on our microwave. I secretly love him.)

*By "tinted" I mean "slightly burned." As I was making the hard candy to pour in the windows the directions in the recipe didn't get the candy quite to that wonderful (and necessary) hard crack stage, so I let it boil a little longer. Umm... a little too much longer. When I peeked under the lid and checked it again my beautiful clear candy was turning brown around the edge of the pot. Sad. But I'm not overly sad about it since, after all, it is a Halloween house and it just kind of adds to the spooky factor to have dark windows. Hopefully I'll get it right next time though.

Tip 1: The recipe I was following (from one of my college cooking classes- if anyone is interested let me know and I'll post it) suggested using the candy mixtures that you use to make windows as the cement which holds the house together. The recipe says that you could use frosting, but that the candy hardens so much faster that it saves you a lot of time holding up gingerbread walls while you wait for frosting to harden. This made sense, so I went ahead and used the candy recipe (a second batch since the windows have to harden before you assemble your house) to put my house together and it worked great. The only downside was that I wasn't extremely good at navagating where the boiling-hot candy went, so I ended up with some drips and globs on my base and on the last wall of the house. I'm sure this could be prevented with some practice though.

Tip 2: When you're done, rinse the pot you make your candy in right away in HOT water. This will melt away the extra candy and keep it from ruining your nice pots.

Tip 3: Before you wash your pot, get rid of as much as possible of the extra candy mixture left in your pot by pouring it into something you can throw away so that the candy won't harden in your pipes. I don't suggest using a plastic cup. Otherwise you'll end up with this: 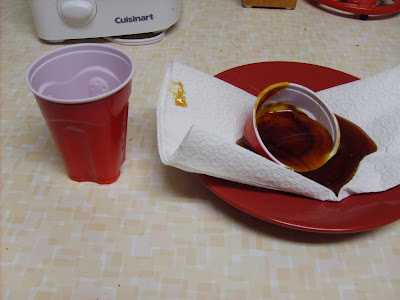 Happy Halloween this Saturday!
If anyone else makes Halloween houses please send me a link so I can see pictures!
Posted by Katie Lewis at 6:22 PM

I am definitely excited to see the Halloween house in person in 3 more days!!!

Almost as excited as I am to see Olivia, you, and Bryan.

those andes mints would have made it onto the roof of my mouth, not the house. I love those things. That is better than any house I have ever made.

Mom- we are excited to see you too!

Kara- you crack me up. I am still chuckling to myself about your "roof of my mouth" comment over here. We should get together sometime.

Your cup melted just like the wicked witch of the west. :) That's what it made me think of anyway! Best of luck with the Christmas house; I love your Halloween one!

Love the Halloween house!! I'll have to add it to my list of crafts for next year!!

I love your Halloween Gingerbread house. We started doing this when my kiddos were quite tiny. It's so much fun to make the spooky decorations!

Rebecca of the R&W Gals

PS I'm with CK Morgan. I can't use candies that I like. I have no will power! Those andies would have done my thighs is!!