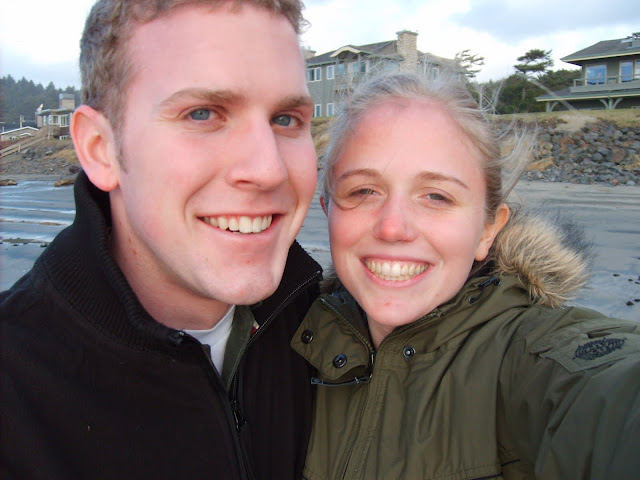 I remember I was wandering around a picnic table just outside the west entrance to the bookstore on campus. I was on the phone with my mom and I was trying to figure out what to do. I had been taking classes fall, winter, spring, summer, fall, winter, spring, summer for almost two years in a row it and was wearing on me. I needed a break. On the other hand, Comparative Lit was only offered summer term and winter semester. If I took my much-needed break I would have to wait until April to graduate. If I stuck it out and just took the class during the upcoming summer term, I would have the option of graduating in December. I reasoned with myself that I would probably have nothing else to do in life that would make it necessary for me to graduate in December, meaning that I might as well just play during the summer and finish it all up winter semester. It shouldn't really matter. But there was one reason why it might matter.

We met the first day of orientation freshman year. My new friend Lindsay and I were sitting together at the pep assembly they herded all of us new freshman to. Then, right in the middle of that assembly they had an intermediate hymn. That's BYU for you. It wouldn't phase me now, but as a brand new freshman and not used to being surrounded by the culture of my LDS faith 24/7 it struck me as funny then. I laughed. I laughed so hard I threw my head back laughing. And when I did my head hit the knee of the boy behind me. I apologized and tried to behave myself. When the pep assembly finishished and we were all being herded out of the Marriot Center the boy I hit was stepping out of his row of seats the same time I was. I apologized again. We kept the conversation up all the way over to Helaman Field for the most discusting lunch of my life. (I puked it up about twenty minutes later when I caught a wiff of the sprinkler water over by the dorms.) His name was Bryan and I remember he was wearing a blue baseball cap. He looked like a regular, all-American kid. This is ironic, thinking back on it now, because it was about five minutes into this conversation that he was telling me tales of how he spent most of his growing up years in Germany. Whoa, international. Cool. Anyway, Bryan and Lindsay and I ate lunch together. But then I lost track of Bryan for the day when the aforementioned throwing up in the bushes occured. He didn't notice me peel away from the group and kept on walking. I told myself this was no big deal, but despite the lame speeches going on in my head, I really wanted to meet up with Bryan again. So I went to more of the orientation stuff than I had really planned on. Sure enough, he kept going too. A couple of days into it we both confessed that we were just going to hang out with each other and agreed to stop going to all the weird activites. We were friends. And about a month and a lot of late night walks around campus later, we were dating. We dated our entire freshman year. At the close of the school year, my older sister and her fiance invited Bryan out to my house for their wedding. So we all left school together for their wedding in Oregon where Bryan met my entire family. A few weeks later I flew out to Virginia and met his whole family. We were in love. The problem was, Bryan would be leaving on a church mission soon. He would be gone for two years. I planned to wait for him and he knew it and hoped, deeply hoped, that I would.

I didn't. I dated other boys. I broke my promise to wait more than a few times. And I know it sounds like a cop out answer, but it really did feel like the right thing to do at the time. I still think it was the right thing to do, but I'm never entirely sure why. There was a lot of praying and crying going on during those two years.

Bryan and I had written off and on during the two years he was gone. At first I wrote him every couple of days while he was in the Missonary Training Center. Then when I started dating somebody I would stop writing him. When I stopped dating somebody I would explain the whole thing, apologize, and start writing him again. After a few rounds of this, he got a little fed up with me, and deservedly so. He didn't write for about three months. I wrote him every week during that time. I had no idea what was going on. The mailman was the chronic bearer of bad news: nothing. Then, feeling exasperated and confused, I turned to friends for solace. One of which I later started dating. Timing was just off for me and Bryan. It was while I was dating this somebody else that Bryan finally sent me an e-mail apologizing for not writing. But I was so frustrated that I hadn't heard from him for so long. I asked him to stop writing me. But I missed Bryan. I missed him deeply. I thought about him no matter who I was dating. There were so many days I found myself walking up the hill to campus, in the mood to talk to somebody. I'd pull out my phone to call and then realize I couldn't. It was Bryan I wanted to talk to, but we were only allowed to write letters. I was never so jealous of Switzerland in all my life. Switzerland had Bryan. And I was alone, surrounded by friends that weren't him.

As you might have guessed, the somebody else and I broke up. By this time I would like to say that I think I had grown a lot. And I knew what I wanted in life. His name was Bryan. I sent him an e-mail apologizing for everything and asking to write to each other again. Both of us had been so hurt that somehow we agreed to just write as friends and figure out the rest when he would be coming home in a couple of months. That is what we agreed upon. But, the truth is, I was so nervous about what would be coming.

Well, it was the middle of summer now and the end of Bryan's second year was creeping up. Spring term had just finished and soon summer term would be starting. I was working on my class schedule and talking to my mom on the phone. I confessed that I wasn't sure what would happen with Bryan when he came home. I almost didn't like to talk about it anymore. On the one hand, I hoped more than anything that things would work out for Bryan and me. On the other hand, if things didn't work out, I didn't want my scholastic life to have revolved around it so much that I would be pained with the thought of my failure with Bryan every time I remembered my graduation date. I really had no idea what to do. It was while I was weighing the pros and cons of taking that stupid Comparative Lit class the following term when I remarked, "I just don't feel like I have enough information to make this decision."

"We make most decisions in our life without enough information," was my mother's reply.

It is in thinking about this so much that I have come to this realization: making decisions without enough information is what life is all about. It is what God is all about. If we could make every decision in our lives entirely on our own- especially the really important ones- with all the information we needed we would have no need for a loving Heavenly Father. It is because we cannot know everything that we so earnestly rely on our Father in Heaven and the promptings of the Holy Ghost to help us reach a little farther beyond our mortal understanding. I didn't know entirely what difference it would make if I took that break and waited until April to graduate, but my Heavenly Father did. It is through experiences like this that we are able to see the hand of God in our lives and feel the presence of the Holy Ghost and realize just how dependent we are upon our Savior, Jesus Christ for our eventual perfection. I am so grateful for a mother who always taught me the importance of living righteously so that I can have that guiding influence in my life. I need it so much. It is only through the whisperings of the Spirit that I will ever have enough information.
Posted by Katie Lewis at 9:22 AM

Nothing like a nice romantic/spiritual blog post in the morning. I didn't know you bonked your head on his knee; that is funny.
I liked reading this one.

Hoo boy, do I remember the two years of crying and praying!

Good for both of you to tough out a tough two years. I love the line about being jealous of Switzerland.

And yes, I do remember that conversation about your class. Love you bunches Katie. And yeah, you made me cry right before the bell is about to ring for class to start, you little pill. :)

Just what I was going for, Mom. Glad to hear of my success.

I loved reading about how you met! That is so funny! Thanks for sharing

This us like the way expanded version of what you told me yesterday - I love the story! Isn't it funny how things work out?!

Oh, I LOVED this post! I never knew most of this. Sheesh, I was a BAD neighbor. Please continue your love story in another post. I want to hear what happened even though I know the ending :). You left me on a cliff hanger!

I loved this post! So true. Making decisions without enough information still drives me crazy at times, though. You're a better woman than me.

i like the spirituality of this post. very well spoken (and true) words. although...i'm not gonna lie...my favorite part is the part where you laughed in the middle of a hymn and hit your head on bryan's knee. so classic!

When I first started reading this I thought it was gonna be a funny story about a conversation you had with someone where they gave "too much information".....but I was pleasantly surprised. Thanks for writing that, I think I needed it today ;)

I don't think I ever knew the extended version of the you and Bryan story...I just got to be around for the beginning. What a fantastic thought from your mother! Excellent post.

Katie this is a beautiful story, thanks for sharing.

I like this post. I feel like I make every decision without hardly any information! :) Nice to know other people do too! :) And I'm glad things worked out and that you and Bry Bry are together! Yay for love! And friends! :)