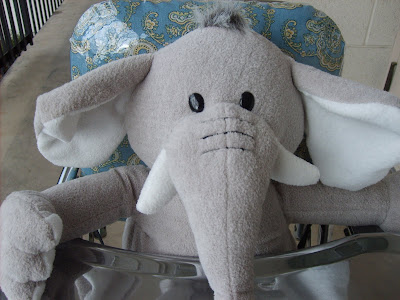 My sister is moving. The one who has lived downstairs from us for our whole married life (the past two years). We will miss them a lot. We have loved having them so close. Incidentally, we will also miss all their baby stuff. We've been borrowing a number of baby things from them which has been a total win-win situation since it keeps us from having to buy those things and it gives them some free storage. But now that they're moving we're giving most of their things back. One of those things is the little baby seat/ highchair thing we've been using for the big O. (Did I mention yet that she's eating "solid" foods now?) I was going to just go buy one since they only cost about $20, but then I thought of a different option.

Over the summer Bryan worked for our apartment complex helping move people's things in and out so all the apartments could be re-carpeted. It was a huge process. It basically required everyone to move out in the morning and then move back in in the evening. Anyway, a lot of people got rid of extra stuff during the whole process. Long story not-so-short, one evening after work Bryan brought home this old high chair that somebody gave him for free. I winced when I saw it (it was SO ugly and old-looking), but tried to be supportive and figured we could throw it out later when Bryan realized what a piece of junk he had brought home.

Well, it has lived in the closet all this time and last night when I was considering buying a new highchair I pulled out the old hunk of junk to see if it could be salvaged at all. I wiped down the ugly brown seats, took note of the fact that there were no safety straps, and sat the big O in it to see how well it worked. I was surprised by how functional it was. And after some tinkering and thinkering I decided I could fix it up and make it beautiful and safe. So, I now present to you... 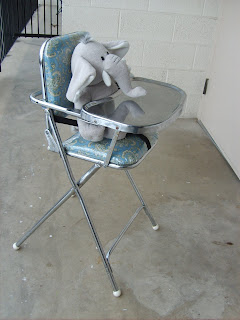 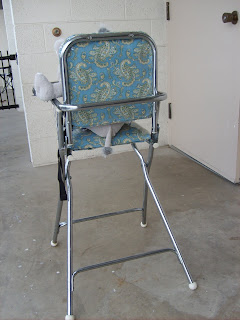 ...the "new" highchair! Since the big O was napping during the photoshoot, Howard will model it for us. 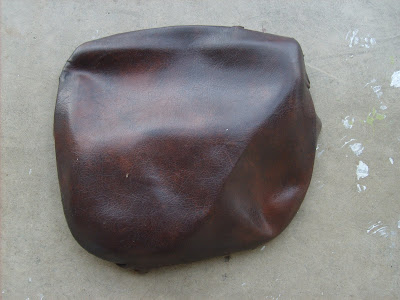 I was so excited to get started that I forgot to take the "before" picture, but this is what the old seat covers looked like. Just imagine this brown nastiness with rusty staples holding everything together. And then think about putting your beautiful firstborn daughter in it to eat food. No thank you. 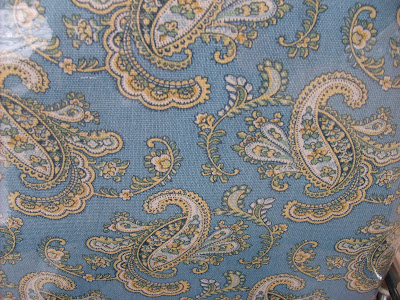 This is the fabric on the new seat covers. A cotton print of "pretty paisley" (bough on clearance last month) with instructions on the selvage edge that it's "dry cleaning recommended." As if. It's a high chair, for crying out loud. Not only will it for sure get messy, but it will for sure get messy every day. So, being brilliant like I am, I picked up some clear 12 gauge vinyl from the fabric store--$3.49 for a yard. Not bad for a stylin' new high chair. And it didn't even use the full yard.

I wasn't feeling up to doing a tutorial, especially since this isn't a standard size high chair (anymore--maybe it was back in the 60's?), but if you're interested in trying to do this yourself on your own funky high chair, I recommend looking over this tutorial. Also, by way of really quick instruction, I unscrewed the seat and back from the frame, then using a flat head screwdriver I took out all the old rusty staples one by one (a pair of pliers helps with broken pieces of staples that may remain) and took off the nasty old brown vinyl. I used the brown vinyl pieces as somewhat of a pattern. Basically I laid it down on the wrong side of the paisley, traced around it with a pen, and then cut out a rectangle that was a couple of inches bigger than that on all sides. Then Bryan stapled the fabric to the seat/back frame while I kept pulling it tight. Then I cut the excess fabric off the back and we did the same thing with the clear vinyl. I was really surprised at how easy it was, actually. My only recommendation is to cut your fabric piece big, if possible. I cut the fabric pretty wide and we didn't have any issues with it, but I was a little more skimpy on the vinyl and it made for a slightly more nervous me as Bryan came at it with a staple gun (actually, it was a staple hammer that we borrowed) somewhat close to my fingers. (Just for the record, Bryan did a really good job. I was never in any real danger and neither of us suffered any injuries.) For the back pieces I sewed the vinyl, fabric, and old ugly brown piece all together and just sort of... made it work. If you want more details I'll explain, but it was kind of a tricky process since I couldn't use pins.

The (almost) last step was to put the safety belt on. At the beginning of the semester Bryan cut the waist strap off of his backpack and gave it to me to use for something later. (He knows me so well.) Actually, I think it was Bryan who first suggested using that buckle as a safety belt for the high chair. So since I already had that piece, I bought a bit more black webbing and sewed it into a loop. We stapled the loop onto the bottom of the seat piece, centered on the front edge. *Note: I should have made it longer. Then we stapled the other buckle straps onto the bottom of the back rest at the bottom. Now we can just thread the buckle straps through the loop and it keeps the big O in nice and safe. 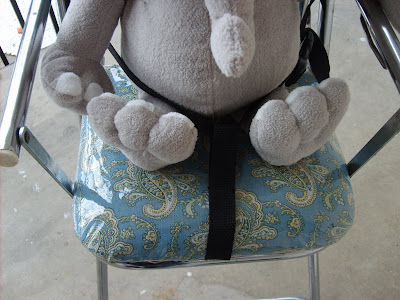 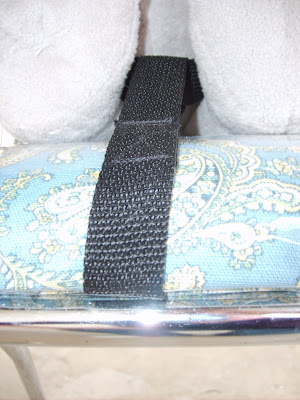 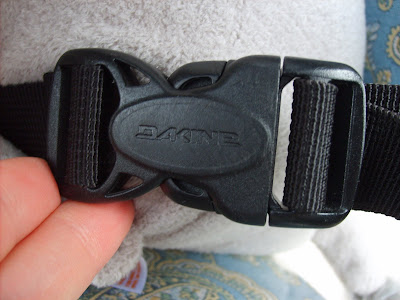 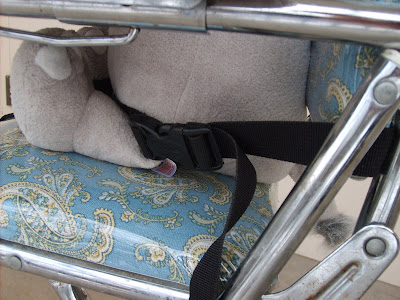 Finally, we stapled the back cover pieces on (the part that I sewed together). You don't really notice the staples since they kind of blend in, but you can still see them in some places if you look hard. 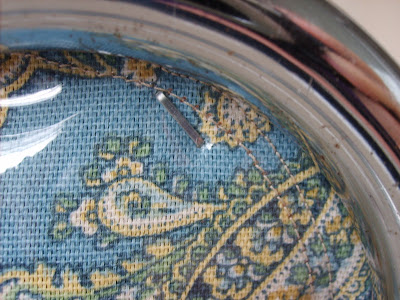 Then Bryan held things tight while I screwed the seat and back pieces back onto the chair. And now it's done! 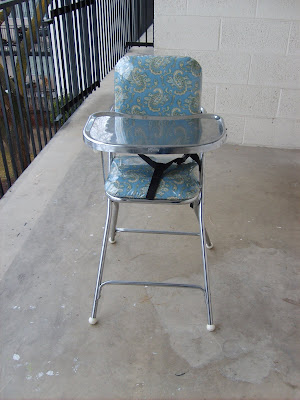 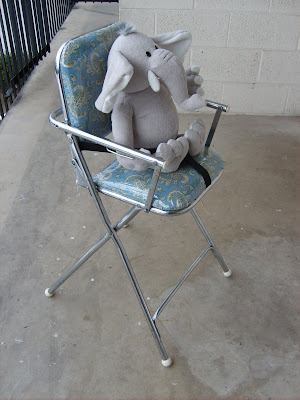 One of the things I really like about it is that I think it'll be just the right size for a toddler dinner chair so the big O can sit up to the table when she's bit enough, but we'll still be able to strap her in. 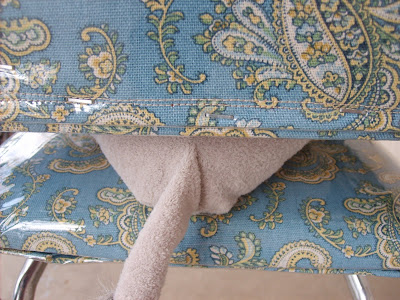 And, for better or worse, we won't get Cheerios and sweet potato puree stuck down in some little crevice in the back. It'll just be mashed into our floor or something instead.

Oh! Another major bonus is that this high chair folds up. I didn't take a picture, so you'll just have to trust me there.

Anyway, hooray! hooray! for our pretty, new highchair. It makes me happy just to look at. And, seriously, re-upholster something. It is so empowering.

WOW. That is really quite impressive. It looks great-you guys are quite brilliant.

i LOVE it! It's so so cute! and it's one of a kind which is awesome. I'm seriously impressed. and a bit jealous.

I reupholstered the seats on my bar stools and they are awesome. It's fun to do with the staple gun and it really didn't take that long.

Well, that is one cute chair!! You two did a fantastic job!
I think what I'm most impressed with is that you said that you pulled the chair out last night, and now it's done. You are one "let's-get-this-project-finished" kind of a gal! I'm very impressed. I love the fabric, too.

Good work! You are so creative! :)

Your high chair makeover is FAB-U-LOUS!!! Your sweet daughter is one lucky girl. Her Mama is stylish & thrifty!
God's blessings,
Sarah :D

It looks awesome Katie! Great job! I need to re-upholster our computer chair. Hmmmm....maybe I'll do it soon.

I bet Papa G is so happy his Christmas present to O is now a model! Howard must take after Bryan. I'm so excited to see it in real life this weekend! 'It' meaning the chair...and O. Of course! I'm most excited to see her!

So cute and retro. And I love the way Howard's tail sticks out the back. I love quick-and-easy reupholstering projects like this. They always make the room look so fresh and new!

That rocks, so retro. I love the fabric you chose. Great score. Thanks for linking up!

you are amazing. I love the fabric!

When the time comes I hope I can find a high chair like that to fix up. I love the metal tray. You did a terrific job! So pretty. Plus, when your dd has her first birthday, the pictures with the cake will look pretty without some big plastic high chair in the background.

This is cool. I have a hand-me-down high chair from about the mid '80s which is very similar. The vinyl is worn on the seams and I was thinking of doing this too. The process you described pretty much covered how I thought it could be done.

This is cool. I have a hand-me-down high chair from about the mid '80s which is very similar. The vinyl is worn on the seams and I was thinking of doing this too. The process you described pretty much covered how I thought it could be done.