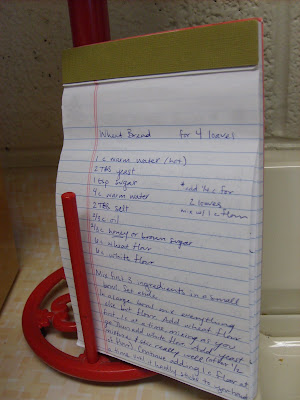 Sometimes I have a lot of ambitions that I don't get around to actually carrying out for a while.  Remember when I asked you about baking bread?  Well, I had been discouraged by some sad failed attempts in the bread baking department in the years that I've been married, but this past Sunday we were running low on bread and since we don't go shopping on Sundays and I happened to have quite a lot of free time, I decided to finally try out this nice bread recipe I have.
It's from my friend Katie (no, I'm not awkwardly referring to myself in the third person, this recipe is from another Katie).  I don't know if she wants me to share her last name with you all here, so I'll just call this Katie K's recipe.  You know what?  It is a good recipe.  In fact, in my book it's a great recipe since it is the first and only that I have succeeded at when making it all by myself.  Want to make some?  Here we go... 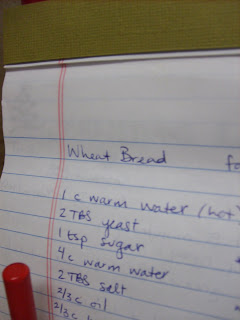 Mix first 3 ingredients in a small bowl.  Set aside. 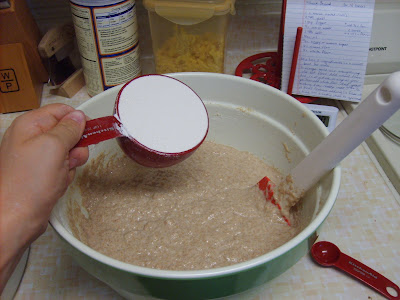 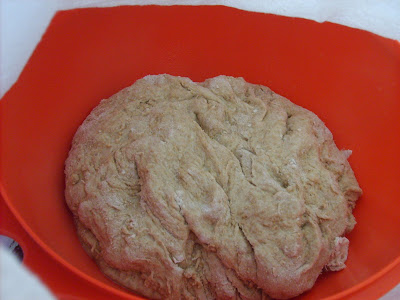 Knead about five minutes...ish.
Grease a clean (big) bowl.  (Okay to use spray grease like Pam.  Side note: I really like to use the "Pam with flour" kind.  It works great.  And it doesn't hurt that it smells like cupcakes every time you spray it.) 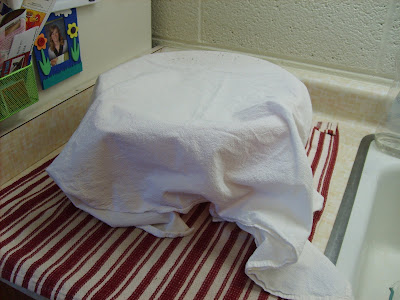 Put dough in greased bowl and cover with a lid or towel. 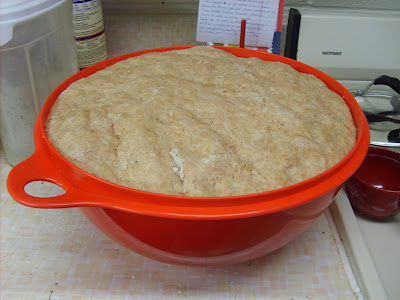 Let rise in bowl (in a warm place) until dough doubles in size.
Punch it down. 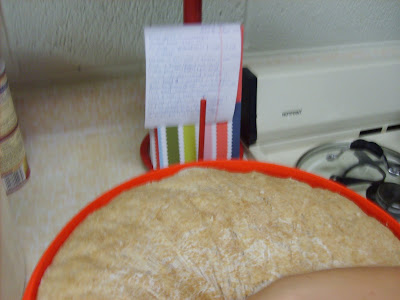 This is what happens when you try to take a picture of yourself punching something. 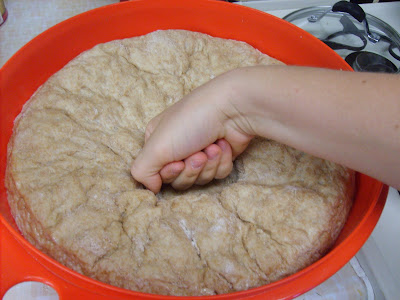 Here's a fakey picture of me pretending to punch the dough. 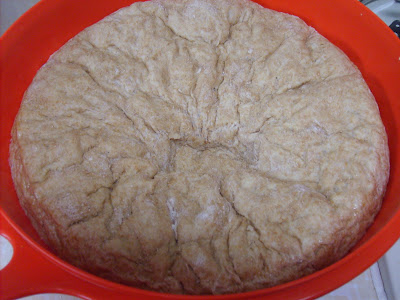 Here's the punched dough.
This is probably what your face would look like if I punched it.  BAM. 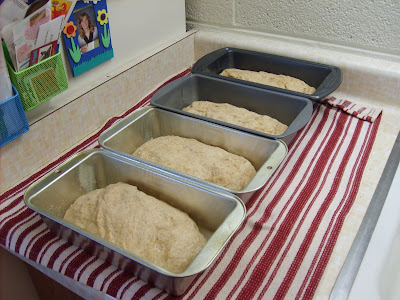 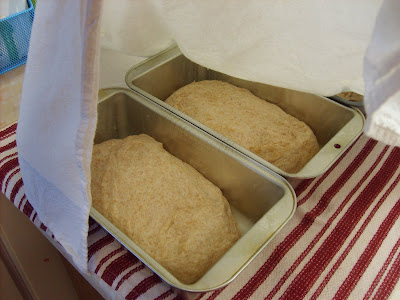 When the dough was just put in the pans. 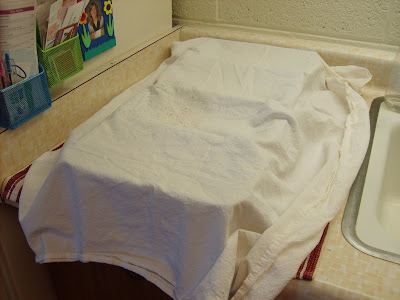 Let dough rise with a clean hand towel over it (I just used the same towel from before) until bread is just above rim of pan. 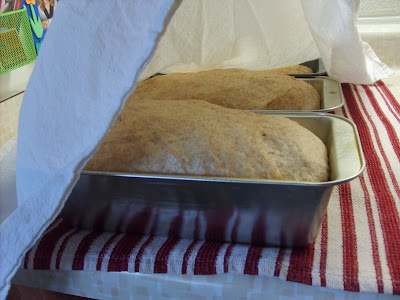 Dough after it had risen
Bake for 30 minutes at 350 degrees.  (I did two rounds of baking 2 loaves at once.) 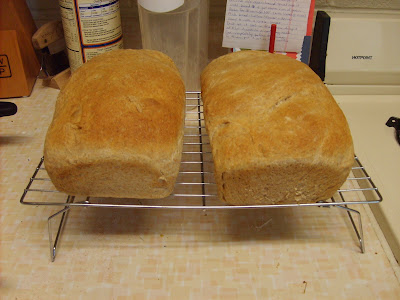 Flick bread- hollow "thunk" sound = done.
Don't let it cool in the pan.  Run a knife around the edges and place on cooling racks.
Cool completely before freezing.
To thaw frozen bread, put it out on the counter. 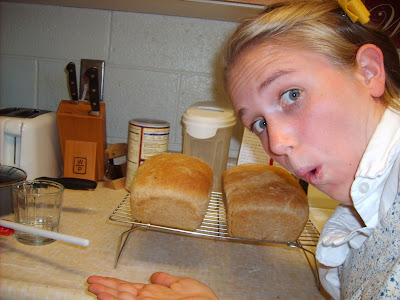 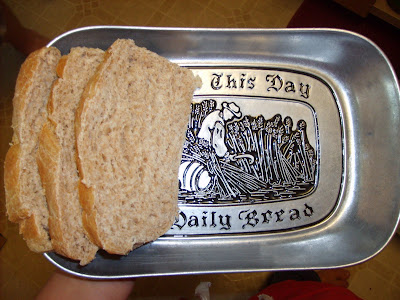 Bryan even pulled down the bread serving dish we were given for our wedding that we had never used before. 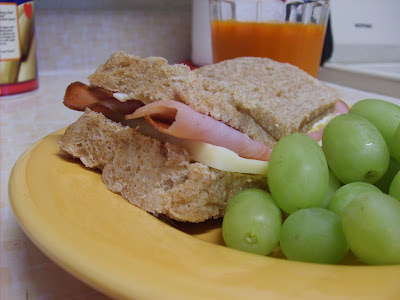 And the bread has made for some mighty tasty sandwiches,
if I do say so myself.
And I do.
...Don't be a hater that I drink carrot juice.  That's what the cool kids do. 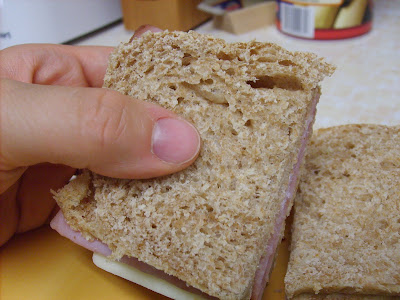 H
Here's a close-up of how wonderful and lush this beautiful bread is.
So hearty and tasty and wonderful.
Other great things about this bread:
-I made it.
-It was an easy success even where we live at a very high altitude.
-It didn't come out looking like a flat brick... like my past attempts may have.
-Olivia can actually eat it.  (Wonder bread type bread gets stuck to the roof of her mouth and she ends up gagging on it... not so pretty to deal with.)
-It is way super mega cheap.
-Saying that I made bread makes me feel like a real woman.
Anyway, just wanted to let you all know that I hadn't forgotten about my bread making ambitions.  If this becomes a regular thing I'll let you know.  But for now we've still got one loaf in the cupboard and two loaves in the freezer, so I think we'll be set for at least a little while.
Anyone else have good homemade bread recipes?  Feel free to share in the comments.  :)
Posted by Katie Lewis at 8:00 AM

Thanks for sharing! I'm going to have to try this out.

I noticed you used metal baking pans, any idea how to adjust for glass or stoneware, or if you would even need to adjust baking time/temp?

Bree- I have no idea how to account for glass or stoneware. If it were me, I'd probably just bake it the same. But I don't know if that's what somebody smarter would tell you. Anybody else know?

Awesome, I'll have to have the hubs try out the recipe. Oh, and I love the pic of you next to the bread.

You are way, way cool. I am proud to be connected to you in some way. Your comment about what my face would look like if you punched me made me laugh out loud. :)

1. That bread was SO good. I was going to ask you for the recipe, so this post made my life that much easier.

2. I totally wish you referred to yourself in the third person.