If you don't want to read all of my blabbering nonsense, just scroll down to the part that says "Pack & Play Mattress Cover Tutorial."

Well, the big O is happily playing on her own and (fingers crossed) not getting into anything naughty, so I thought I'd take this time to write a quick little tutorial for you.  Nevermind.  Quite literally the moment after I wrote that she made a v line for the kitchen (where she's not supposed to be) and when I brought her out it was evident that it's time for a nap.  So now I'm going to try and write this quickly enough that I can share this all with you and still have nap time left over to work on something else I was planning to do.  Here we go.

So I think you all know by now that I'm totally in moving mode, right?  Well, here's more proof of that.

Last week we sold this: 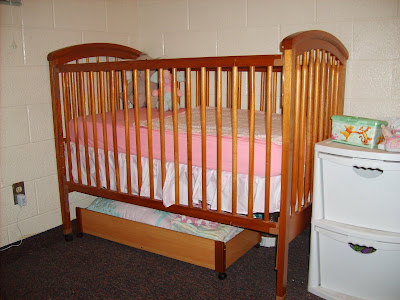 The crib, mattress, rolling storage, and crib bedding* all went to a nice family who paid us some sweet mulah for it.

*We did NOT sell any of the nice, beautiful, sentimental blankets that so many wonderful people made for Olivia.  By bedding I only meant the sheets, the dust ruffle, and the mattress pad.  Promise.

Then we bought this: 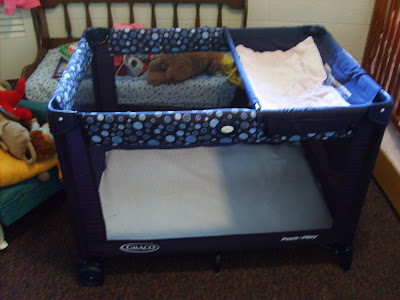 Ta-da!  A Pack & Play!  (Uhh... I promise it's not blurry in real life.)  For a grand total of $45 (at Walmart, if you're wondering... it was on sale) we solved a minor problem we had been having with Olivia's sleep habits, made some money (since it was cheaper than what we sold her crib for), and saved Bryan from having to go through the headache of moving the crib mattress down to the next level.  We lost some storage space in the process, but I say it was totally worth it.  Aaaaaand I think it'll be a lot easier to have a Pack & Play when we move.  Since we'll likely be making a more-than-one-day drive when we move for Bryan's next round of school, it'll be nice to have the Pack & Play so Olivia can sleep somewhere familiar even if we're on the road.  Win and win.

Anyway, the point in telling you all this is that, since we sold Olivia's crib sheets and mattress pad, we needed some new ones to fit her new little bed.  And since two Pack & Play sheets cost $9.50 at Walmart, I decided to stick it to the man and just make some.  So we picked up some materials on the way home from buying the Pack & Play and I got to work.


Pack & Play Mattress Cover Tutorial
Want to make your own mattress pad for a Pack & Play? 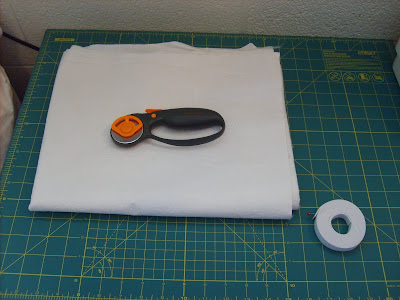 -Some cheap-o vinyl (the kind with the felt stuff on the back)
An old vinyl tablecloth would work great for this, especially since it gets covered up anyway!  That's what I would have used, but we didn't have one.  I ended up buying some at the fabric store and since it was the end of the bolt (but still plenty more than what I needed) it was still cheap!

-Some elastic (I used 1/2" wide elastic, but it really doesn't matter.) 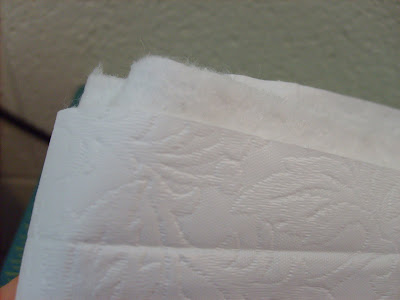 **Okay, so you could totally stop here and just lay this piece down in your Pack & Play, cover it up with a sheet, and move on with your life.  Or you can continue on if you like. 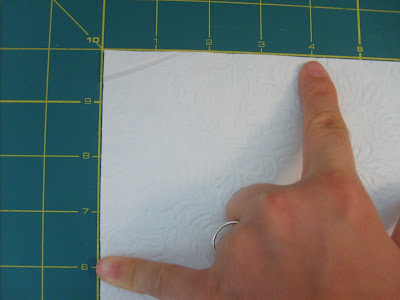 If you have one, get out your cutting mat.  Position one corner of your mattress cover like so, with the felt side facing up.  (I know, I know, that's not what you see in the picture above.  But just trust me on this.) 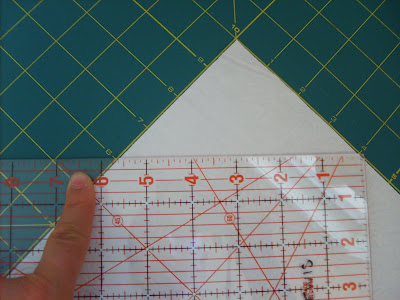 Measure 4" away from the corner of your mattress cover in each direction. 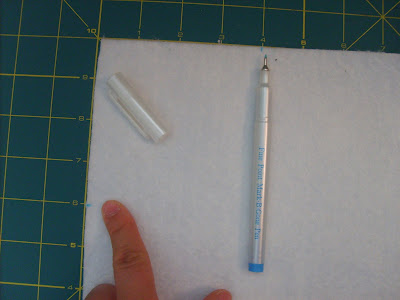 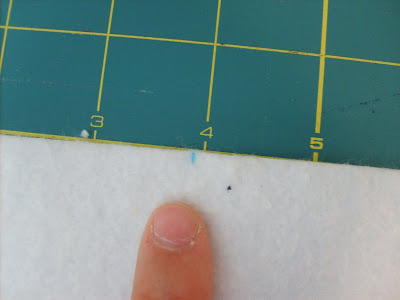 Using a fabric marker (or really any kind of pen--it's going to get covered up and peed on, so who really cares?), make a small line at each 4" mark.

Do this for all four corners of your mattress cover. 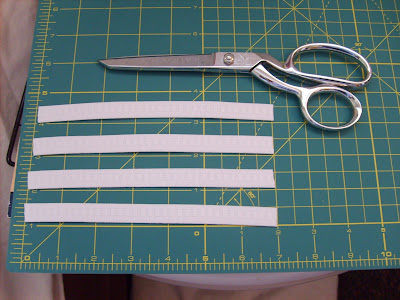 
Step 4: Sew the elastic on 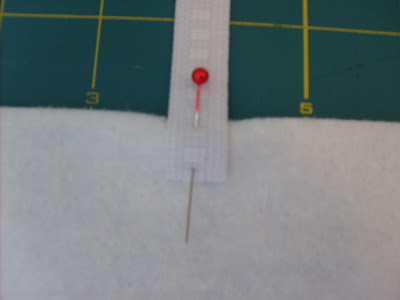 With the wrong side (felt side) of your vinyl facing up, pin one end of one strip of elastic over one of your markings. 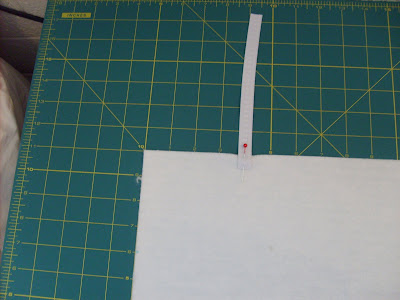 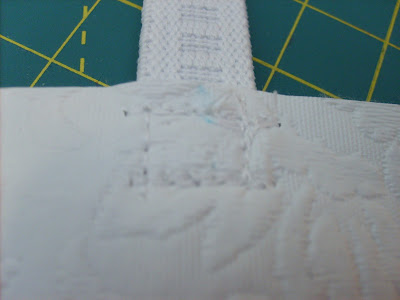 Stitch a square around the end of your elastic, securing it to the vinyl.  (I sewed this on with the other side facing up.  I don't know why I took the picture this way.  Sorry.) 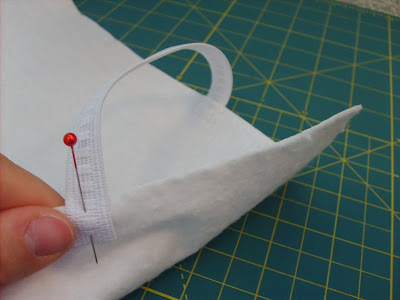 Then pin the other end of the elastic strip to the mark on the other side of your corner and sew in place just like you did with the previous elastic end. 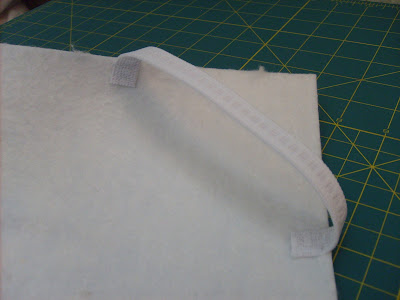 Do this for the remaining three corners. 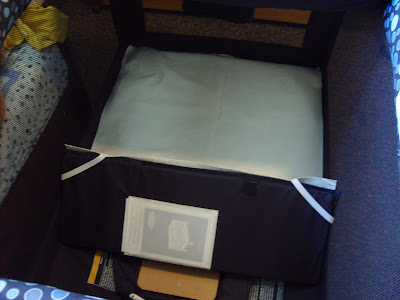 Slip the mattress cover on your little Pack & Play mattress... 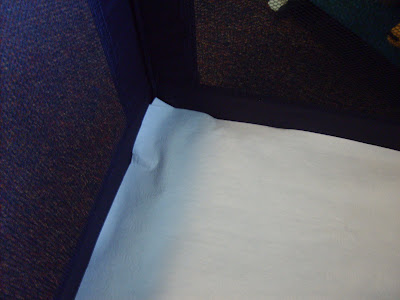 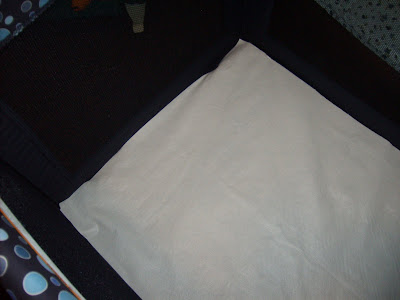 ...and enjoy the peace that comes from knowing that if your kid pukes or their diaper leaks in the middle of the night, you won't have to deal with a soggy Pack & Play mattress!

Oh, and, uhh, you should of course cover this up with a sheet.  It probably wouldn't be a good idea to lay a child down right on plastic.  That probably goes without saying, but you can never be sure.  Okay, now I'm done.

Ooh that's great! And I love how easy it is! Thanks so much for the great idea, I'll be linking.

I love that Katie! So easy and fast too, my favorite kind of project :).