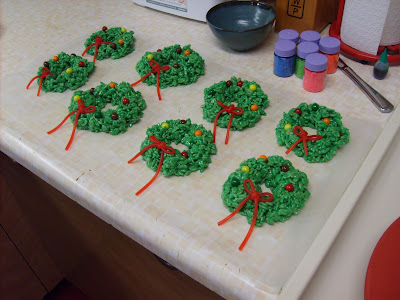 |little wreaths made using this recipe|
So, I have some cool stuff to share with you.  But I'm not in the mood to upload and pick through pictures right now.  So I'll do that later.  Monday, maybe.  In the mean time, I finished another project today.  I love how it turned out.  Love it.  In fact I love it so much that if there is a tutorial for it in the works you just might all have to wait until after Christmas.  Because I think I might make some more as gifts.  In which case, I don't want to blab all about it on my blog and ruin the surprise Christmas morning.  Sorry to those of you looking for ideas.  You'll just have to wait!  Anyway, all of this has me thinking about Christmas presents.  Again.  And I keep coming back to the same delemah.

Should I give (read: make) someone something because it's cute/pretty/fun/useful even if it's not something that I know they need or that they'll especially appreciate or that will be meaningful to them in some way?
Because I'm a pretty crafty lady.  I can make a lot of things.  But I personally don't think that Christmas is about giving or receiving a lot of just... things.  Now don't get me wrong.  I don't snub presents that are just nice things.  I actually love getting random little things at Christmas or any time of year.  Some of my favorite presents I've received have been random little things I never thought of owning, but happen to love once it's in my posession.  Which is why I'm not entirely sure where this whole inner contradiction I'm having comes from.  But I think basically it boils down to the basis that I want to give gifts that family members and friends will be genuinely excited about.  Or that they'll look at the gift and know that it was meant just for them--that it wasn't some assembly-line creation that could have just as well gone to somebody else.
I guess it's kind of like the difference between having your dad go on a trip and bringing you back a present.  Isn't it way more meaningful and cool if he bought the present while he was on his trip versus picking it up last minute at the airport?  Because you can kind of tell, right?
That's what I'm getting at.
And so, I've been thinking about Christmas presents today.  Again.  Trying to decide if I want to give something because that person will actually like it or because it would be easy and fun for me to make.  Both should be true, but it's more important to me that the recipient of the gift loves it and finds it useful, or at least meaningful.  Although I'm also big into trying to make things that people won't keep around just because I made it.  I've made a lot of junk over the years that I wouldn't mind if people got rid of.  :)  I want them to keep it and use it because they like it inherently and the fact that I made it makes it even cooler.
You know?
P.S. Still having a super hard time thinking of good teenage/young adult guy gifts to make.  Two down.  At least three more to go.  Aye-yi-yi.
Posted by Katie Lewis at 3:40 PM

For an adolescent / young adult guy - how about a fun "date kit" for a fun date to do / go on?

I just ordered some of the super soft transfer paper mentioned on LBB to make some personalized T-shirts and a digits of pi belt. If you can think of anything you'd want some of that for, I'll share. :)

I'm in the same boat on the guy stuff. I'd love to make something for my dad & brother, because I know they would really appreciate it, but I have NO idea what to make.

This is the problem I have with lists- yes it is nice to know exactly what someone wants, but I kind of hate just buying something off of the list because part of the gift should be from/about the giver. I know that sounds selfish...and maybe it is...but I just feel like there needs to be a reason that I gave them that present instead of their friend's neighbor's aunt, ya know?

On the other hand I have been the recipient of some gifts that I know I will never use or just isn't me and so while I appreciate them, I would have been overall more satisfied if I could have gotten some use over them.

Thus I am torn...but I think homemade gifts are always nice; whether they are handy or not they let the receiver know that some effort was made in their behalf.