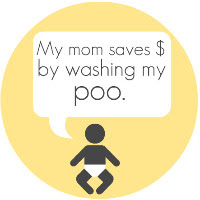 So I'm teaching a class today for some friends/neighbors on how to use cloth diapers in our apartment complex.  Just a free little class to try and help others get a feel for how to make using cloth diapers realistically work in their lives if that's something they're interested in.  Because it does save us money and I'm happy about that.  And I like feeling just that much more self-sufficient.  Anyway, so I'll be passing on the little I've learned so far to some near-by friends today.

In case you missed out on Cloth Diaper Week you can check out my following posts on using cloth diapers:
You can also read through my ramblings about cloth diapers and wipes before I had actually used them HERE and HERE.  <--Those two posts probably aren't as helpful to you as the comments people left in them, so definitely check the comments.


Also, I wanted to mention just a few more things I've learned/been thinking about relating to cloth diapers now that we've been using them a little longer than when I wrote the Cloth Diaper week posts.

First of all, the PUL washes just fine.  However, I do make sure that the PUL is sticking out of the bag (as opposed to being stuffed inside as a liner like it usually is) when it goes through the wash.  This helps it rinse better.  Although sometimes I still notice soap on it, so I just run it under the water real quick to wash off the rest of the soap.  Just thought I'd put that out there.

Secondly, I wanted to give you a heads up on the cloth wipes.  They work great.  However, Olivia did develop a little bit of a diaper rash last week and Bryan and I think it was due to the cloth wipes, so we switched back to disposable wipes for now.  This being said, she had no problems with the cloth wipes during the first week of using them, so maybe the diaper rash had nothing to do with the wipes.  In any case, I think we'll switch back and try the cloth wipes again soon now that her little bum is back to normal.

Third, so far the All Free & Clear laundry detergent is working just fine for us.

Fourth, for now at least, we've been putting Olivia in disposable diapers at night.  She leaked through her cloth diaper one night and woke up earlier than usual the next morning.  The following night we put two liners in her cloth diaper.  As far as I remember (this was about a week ago) she didn't leak through that night, but she still woke up earlier than usual.  Bryan wasn't fond of the waking up early thing, so he requested that we switch to disposables at night for now.  I have no problem with making my husband happy as long as we still have disposables to burn through, but I don't really think it's necessary.  I think she'd do fine with a double set of liners in her cloth diaper at night.  I think the waking-up-early thing had little to do with what was on her bum and everything to do with the fact that we had been out of town in a different time zone for the weekend.  Just saying.

And, lastly, today I finally got around to making some fleece liners.  Just a little rectangle of fleece that sits on top of the part that goes next to her bum--where the poo would go.  I've heard about this from others and I'm giving it a try.  I'll let you know how it goes.

P.S. I made that little cloth diaper graphic.  Just for fun.  And because I'm cool like that.
Posted by Katie Lewis at 2:05 PM

If the wipes are bothering her, just use some water with them instead of any special mixture, they would great that way and it's even less expensive. And don't feel bad about wearing regular diapers at night, we do the same with my son (very heavy wetter) and I've read and heard from lots of cloth diaper moms that they don't sleep as long in cloth diapers because they can feel it on their skin. Don't know if it's true or not, but one diaper a day isn't very expensive at all. $.12 a day for sleeping in, I'm cool with that.

Thanks Beth! We do actually just use water (from a spray bottle) on the cloth wipes, so I'm not sure what was up with that rash. :)

We had to put my son in disposables at night as well. He got a rash too!

Also, I haven't read back through comments, but do you know you shouldn't use dryer sheets or fabric softener with even your other clothes when using cloth diapers? I know you use a community washer and dryer, so be wary that you may end up stripping your diapers at some point (a process involving dish soap) if they start to repel instead of absorb. Dryer sheets leave a build up on the dryer that can build up on your dipes and cause them to "not work."