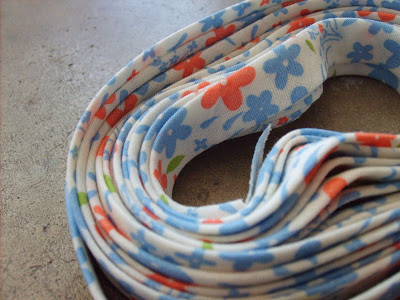 I've thought of a few random things to blog about as I was going about my chores this morning.  So, in no particular order, here they are.

-I'm teaching a sewing class later this month and I'm stumped on ideas for what to teach.  I teach this class every month free of cost to my neighbors (who also happen to be in my ward at church).  So far we've done t-shirt bags, holiday pendants, kids t-shirts, headbands, zipper pouches, shirred dresses, and probably a couple of other things I can't think of right now off the top of my head.  We have so many people move in and out in our little neighborhood (it's full of college students) that it would be okay to repeat a past project, but the thought of doing that kind of makes me feel bored.  I was thinking a Halloween or Autumn sewing project might be fun, but it can be anything really.  It needs to be fairly simple since a lot of my friends who come are a little intimidated by sewing and if it's a quick project that would be a major bonus.  If you have any suggestions, please please please let me know (and leave the link if you have it) in the comments.  I've been thinking about it for a couple of days now and haven't come up with anything.  So your help would be much appreciated.

-I went grocery shopping at 7:45 this morning.  It was amazing.  Truly amazing.  I felt super productive.  After two out-of-town trips and an awkward week and a half in between, our schedule lately has been weird.  And since I also happened to come down with a cold during the week and a half we were home, it was a lazy and non-productive sort of time.  So yesterday Bryan and I set some new goals and I actually made a real to-do list for myself last night.  I've already gotten so many things done.  Ahhh.  :)  It feels so good.

-We went to Houston this past weekend.  By the way, Houston is pretty.  And it's nice there.  And the people at the school where Bryan interviewed were also nice.  We'll just leave it at that.  :)  Another major bonus in going to Houston is that I finally got to visit one of my old roommates (and really good friend) in her natural habitat.  Unfortunately, her parents were out of town so we didn't get to see them (We were roommates for a long time.  I basically know her whole family.), but we did get to spend a lot of time just hanging out with her and her husband who I've known as long as I've known her.  We were all friends when we were single.  It was fun.  And it was fun to see them.  And I was too tired to go to the zoo.  It was weird.  But, all in all, we had a fun weekend.  Oh, and, by the way, flying with Bryan on the same flight as Olivia and me makes it an entirely different experience.  This trip was fun.  Even on the plane.  :)

-We're behind on things.  Because we were in Houston we missed something big and now we're having to catch up.  But I'm really looking forward to it.  More on that later.  It deserves its own post.

-Did you see that video?  The one in the post below this?  I feel bad that I posted it so late last night because it is truly adorable and wonderful and I'm afraid that since I posted it so late last night a lot of you will miss it.  You don't want to miss it.  I always almost cry at the end.  In a really good kind of way.  Just when I think it won't get me it always does.  Also, I'd like to retroactively dedicate it to my brother-in-law Chris who's in basic training right now.  It sounds miserable.  I think marshmallows would make him happy.

Well, that's all for now.  I've got to go work on chores some more while Olivia's sleeping.

buntings are pretty easy and fun! I have a tutorial for a fall one on my blog :)

Sewing project - I vote for drawstring bags, with a double drawstring. They are such a simple, useful thing to know how to make - gift bags, toy storage, carrot or mushroom storage, etc, etc.

And I just read Jen's blog - she has a cute idea for Halloween pillow cases. Super simple, very cute.
http://compulsivelycreative.blogspot.com/2010/10/something-to-blog-about.html

I really like t-shirt surgery. And everyone always has a ton of old t-shirts lying around.

I love your classes, they are always so fun!

Try making the "itty-bitty poochie bags" from Moda Bake shop. They are great for using scraps and only take 15 minutes to make!
Make them for Thanksgiving, Halloween, Christmas, Valetines.....you get the picture. And they are perfect for little hands to carry.