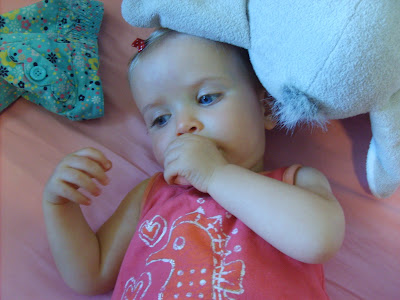 I've had some request for follow-up on the whole thumb sucking issue, so I thought I'd give you a little update.

Okay, so last Wednesday when Olivia woke up I noticed some little bite marks/scabs on her right thumb (the one she sucks 99% of the time).  This worried me, so I called the pediatrician and had a chat with the nurse.  She told me to bandage her up and restrict the thumb sucking by putting socks over her hands.  I did this that day and I think if you asked Olivia she would tell you it was the most miserable day of her life.

(Side note #1: Singing "Popcorn Popping" usually makes Olivia really happy, even if she's really sad, so when she woke up from her nap on Wednesday and was really sad about the tights being over her hands, I thought I'd cheer her up by singing "popcorn."  Man was that ever the worst idea in the entire world.  Note to self--don't sing a song with hand motions when you've ruined your child's life by covering her hands.  I started singing it to her and she just looked down at her hands, made an even bigger sad face, and cried even harder.  So cute and funny, but so, so sad.)

The next day her thumb was looking better and I didn't feel like continuing the misery, so I didn't bother with the tights.  Happy day.

The day after that (Friday) when she woke up in the morning I noticed that her whole right thumb was red.  It was weird.  So I called the pediatrician and chatted with another nurse.  She said it sounded like she had an infection and I'd better bring her in.

(Side note #2: We were running late to her appointment and I was in such a hurry to get to the doctor's office that I didn't bother to get Olivia dressed.  And she was still wearing blue pajamas that we're borrowing from a friend.  But as I was walking into the doctor's office I realized my mistake and thought, "Everybody is going to be asking me how old my little boy is all day."  And I was totally right.  What was the first thing both of the nice ladies that sat next to me in the waiting office asked?  "So how old is your little boy?"  Note to self--do not dress your little girl with hardly any hair in blue pajamas if you plan to take her out in public.)

So anyway, I took her in--blue jammies and all--and the doctor confirmed what the nurse told me on the phone.  She had gotten an infection from those little bites back on Wednesday.  First of all, gross.  Biting yourself and getting an infection from it?  Totally gross.  Second of all, poor girl.  I hesitantly asked the doctor if I was supposed to try and keep her from sucking her thumb until the infection went away.

Okay, so I'm going to tell you what the pediatrician told me, but I just want to put out the disclaimer that if you're seeking medical advice for your child then you should consult the child's doctor--not my blog.  In other words, I'm sharing it here as part of the story, not because you should definitely take this advice too.

Basically the doctor said, "No.  You won't be able to keep her from sucking her thumb.  It's her way of soothing herself.  And all sorts of people will tell you all sorts of strange solutions for getting her to stop sucking her thumb; the stores sell a bunch of stuff, but none of it really works.  The only thing that's really effective is something an orthodontist can put in her mouth, but we won't do that until she's three.  So don't worry about it."

Let me just say, I love this doctor.  It will be a sad day when we have to find a new pediatrician (when we move).  He is sweet, has years and years of experience, and always gives it to me straight without a lot of fluffy nonsense.  And he always tells me not to worry about stuff in a kind, but straightforward way.

So I know this will probably disappoint those of you who were hoping I had some great solution to share for getting kids to stop sucking their thumbs, but you know what I've done about Olivia sucking her thumb since we left the doctor's office?  Nothing.  Absolutely nothing.  Well, except giving her the prescribed antibiotic so she can get that thumb back to full health.

In other words, I've given up on this battle for now.  Because it's not really one that I wanted to fight anyway.  And I'm pretty sure I'd lose.  So, for now at least, we will just enjoy the peace from a happy little thumb-sucking, self-soothing girl.
Posted by Katie Lewis at 8:42 AM

ooooh poor baby! I hope her little hand/thumb gets better quickly! Also I'm glad you were able to get good advice for you and Olivia from your doctor. My mom and dad went through the same thing because my brother and I were both big thumb suckers...I remember them using socks or something...haha. :)

I like that your doctor said that, and I agree with him. I really don't think that thumb-sucking causes teeth problems (it doesn't make sense that something we naturally want to do as a baby would cause a deformity, and I haven't seen or read any proof). And having a self-soothing baby is definitely a good thing!

Yeah for reasonable and down-to-earth doctors! None of our little people go to college sucking their thumbs, pacis, stuffed dolls, whatever and many who didn't need to suck on anything still need orthodontia. After 5 babies, I totally have a "take it easy" approach to all the issues that people have solutions for. Good luck clearing up her owie thumb - poor girl.