Remember when I said I was off to make another little Warhol dress the other night?  Well, here's how it turned out: 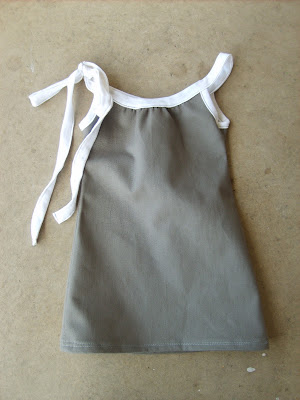 |Warhol Dress from Made|
Bryan's awesome sister is getting married in late December and we couldn't be happier for her.  Her fiance is an awesome guy and they're so fun together.  Anyway, their wedding colors are kind of a blue and gray color scheme, so this little dress is for the big O to wear on the big day.

It's made from some gray denim I had lying around (that I got super cheap on clearance a while back) and a white t-shirt I got for free from a neighbor a few months ago.  It was a cute t-shirt, but it had acquired some stains, so it was perfect for a little dress like this.  :) 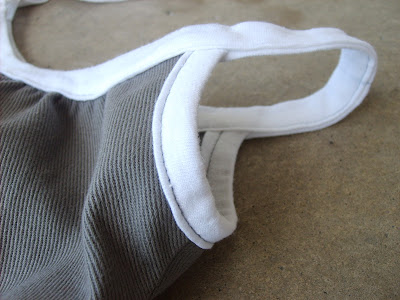 Since I couldn't just fold the fabric over and sew for the armhole like I did on the last one, I made some "bias tape" out of some of the extra t-shirt fabric.  I didn't actually cut it on the bias or anything; I just cut a strip and folded it like bias tape.  It was so easy and it worked super great.  And it has the added bonus of Olivia not having to deal with denim right under her little arm all day.

Oh, and because I know some of you will ask, I made this straight off the 6-12 month pattern with no alterations to account for the fact that this dress is made from denim instead of knit.  I didn't know when I was making it if it would fit or not, but... it does!  Barely.  We have to pull it up from her toes to her shoulders (instead of pulling it over her head) but it does fit just fine.

Since the wedding will doubtless be on a cold and wintery day, we'll probably have Olivia wear this with a white, long-sleeved onesie, some thick cream colored tights we got, and her cream colored bow from Wendy and Peter.  (Click HERE to enter to win some of your own!)

you could embellish it with white flowers made out of the same white t-shirt and sew 3 little pearls in the middle of the flowers. but even so, it's probably fine as is. no one is going to judge a baby's outfit.

I love it!! I think it'll work just fine. As long as she isn't cuter than me... which I know she'll try really hard not to be, but she probably will be. Because she's just so darn cute!!

I love it! I think it is wedding-y enough (as long as your SIL isn't doing the super fancy schmancy everyone-in-a-tux type of wedding), but I do think it would be even more adorable with a cute little flower embellishment. Maybe even a few little ones appliqued around the hem or up one side? I love the gray denim, by the way. :)

Frankly Katie, I don't think it's fancy enough. Jojo and Soapstar are wearing similar dresses except the will be dipped in GOLD. It will still have that home-made touch though, because I will have mined the gold myself.

PSYCHE. I would never use gold, it will probably be silver to go better with the colors.

Katie, I think that dress is super cute. It's too bad Lisa is too close-minded to wear one exactly like it to her wedding. Also, I heard a rumor that she might not actually want a wedding cake made out of twinkies. What a monkey-head.