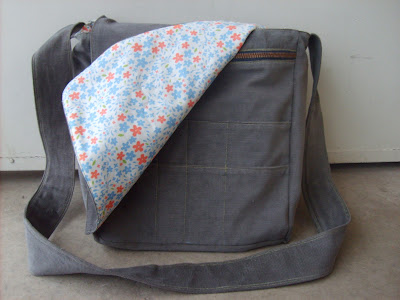 My old purse was starting to wear on me.  I've loved it for at least a good year or so and used it almost every day during that year.  But I needed a change.  My old purse was fun.  But it was a blob.  And it was beginning to drive me nuts.

Then, a week or two ago, Bryan put in a request for a new school bag.  More specifically, a messenger bag.  After one failed attempt at making him one out of pants (like Chris' bag) I suggested we go and just buy fabric for it.  Luckily, I'm terrible at calculating how much fabric I'll need, and we bought way too much.  So after I finished Bryan's bag (it turned out great by the way, but I haven't been able to take any pictures of it yet, seeing as how he loves it and uses it every day), there was still quite a bit of fabric left over.  And it was pretty gray corduroy.

Ahem.  What I mean to say is, it's handsome, mature, masculine corduroy that Bryan's school bag is made of.  It was just the leftover pieces that were pretty.

Anyway, after talking to Bryan and making sure he would still love his bag just as much if I were to make a matching purse for myself (he said it was fine) I got to work.  No tutorial since I was totally making it up as I went, but perhaps there will be one in the future.  Perhaps.

Anyway, enough chit chat.  On with the grand tour of my new purse!

And now, let's see this baby in action...

I used my new purse for the first time yesterday and I am definitely in love.  Everything is so much more accessible.  And the few things that do end up in the big pocket stay put much better.  Sometimes we just need a little bit of structure in our lives.  Even if we're things like diapers, wipes, water bottles, and wallets. :) 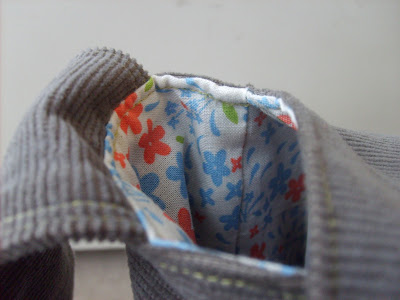 Three cheers for organization!
And a fun new purse!
(with cute lining)
Posted by Katie Lewis at 7:00 AM

I love it. I've been wanting to make myself a messenger bag forever. Love the curdoroy. It seems "sturdier".

I made an almost identical bag ( minus the front pockets ) with long straps to fit over my baby carrier. I looove having a personalized bag! I added applique to the front, too!

awesome bag! love the lining, and all those pockets are awesome!

I absolutely love it! You should do a tutorial, I'd love to make my own. It's super cute.

I love it! I hate sewing bags, but this is seriously tempting. I l.o.v.e the gray corduroy too!

Yes, a tutorial is in order. A+ for the pockets.

Been following your blog for a little while now and love it. This bag is adorable. I agree with previous comments...tutorial please!

I love it! I love everything about it -- the corduroy, the lining fabric, the pockets... well done! I need a new bag for myself since mine is getting far too ragged... and now I want one of these! Any tips for how you did it?