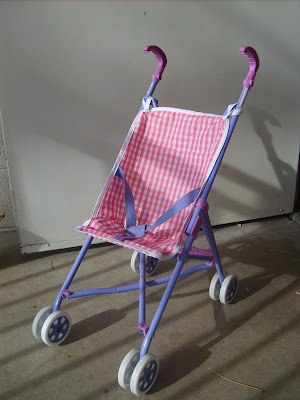 Olivia has always been nuts about dolly strollers, but we held off on getting one for her until she could actually walk.  (We're sticklers, I know.)  But since she's been walking for a while now, we've been on the lookout for one.  We checked out buying one brand new from a couple different stores, but I was less than impressed by the selection and the price tag ($10 at the very cheapest).  So when we hit the jackpot on a dolly stroller graveyard at one of the local thrift stores, we picked one out and brought it home.  For $2.99.

The frame of the stroller is in perfect shape, and even though the fabric it came with was ugly (a gross purple with orange-tinted butterflies), it was holding up pretty well too.  ...Or so I thought.  It had a fatal rip the first night we brought it home.  I had already planned on making a new cover at some point (inspired by this tutorial I saw a while back), but that rip brought a new stroller cover up to the top of the project list. 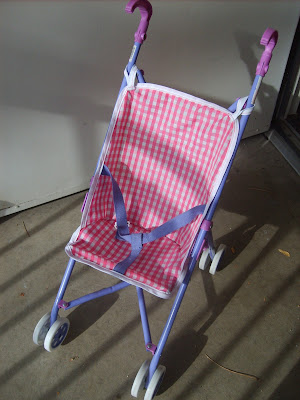 By the next day, Olivia had a fun *new* stroller to play with.

To make the new cover, this is basically what I did:

Although I realized after I was sewing it together that, though my fabric choice here was cute, it was not very wise.  This fabric is pretty thin and is likely to rip easily.  Unfortunately, I foresee myself making another one of these in the future.  So, just in case, I saved the original seat cover pieces in a bag with my other patterns so I can use it next time too.  And I think next time I'll use much more heavy-duty fabric.

Amen. It really IS cute. Nice work - who knew it could be so simple?

Very cute, but the heavy duty fabric is always a good idea even on baby doll strollers, even if Olivia doesn't stand in it there is a BIG chance one of her friends will, maybe even the friend's mom will be sitting right there and not even care as she watches her daughter destroy your daughter's toys... Not that I've had any experience with that (hopefully you can fully feel my sarcasm with the last comment!)

Yeah, our baby stroller is going to need this treatment soon. The fabric started fraying on day 1...but the lining things won't even be good for ours. Thanks for the tips. I'll probably call you when I get around to doing mine. :)

lol at Beth's comment...that's happened to me too, not with a dolly stroller....anyways...Katie-cute cover! Ours is the cheapy from Walmart-the cover isn't ugly luckily, but it's cheap too. Maybe i should do ours too!