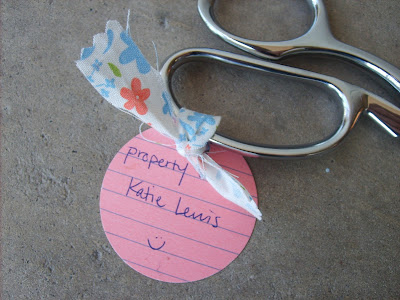 The other night I was scrambling at the last minute (ahem, as usual) to get things ready for a church activity we were having.  I was bringing basically every pair of scissors we own as well as a few other items.  And while we don't have any thieves in our midst, sometimes things go missing after church activities.  People just accidentally take home the wrong stuff.  So I wanted to make sure and label all of our scissors and things really clearly.

I quickly used my circle punch and some index cards to make some little tags.  And then I started looking for something to tie them on with.

I saw my ribbon up in its bin--too pretty.  And too expensive for something that would be thrown away later that night anyway.

Next I saw some string sitting on my sewing table.  But I still wasn't wild about wasting even some string on something that would be scrapped so soon.

Then I saw it.  It had been sitting pretty (but useless) in a little pile on my sewing table.  And it was about to fulfill its destiny....

I cut them into some short little strips (using my shiny new pinking shears) and tied on my tags. 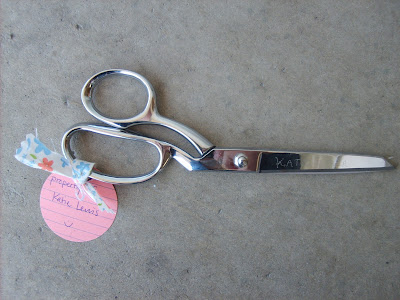 BAM!  Nobody's gonna take THOSE scissors by accident!  Just look at that flashy tag!  Obviously these babies are property of none other than the famous Katie Lewis.  And obviously she has mad crafting style.
That's what a tag like that says.

Oh, and did I mention it was free?  And made from some junk I had sitting around? 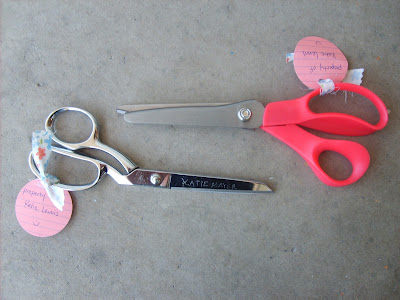 Umm... but do you want to know a secret?  I actually didn't throw them away later that night.

They were kind of too pretty.  And since I'm in charge of these church activities on a regular basis, I figured I might as well just leave the tags on until I either got sick of them or got a different church assignment. 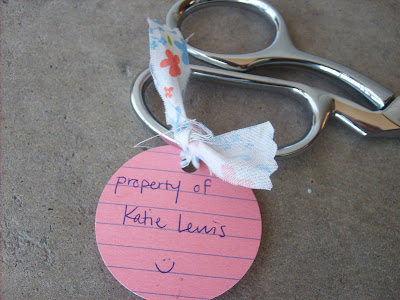 Yep might as well. And when I saw those tags that's exactly what came to mind; these are property of none other than the famous Katie Lewis and she DOES have mad crafting skills! Haha! You rock Katie!

Love your crafty crafting style. I mean that.