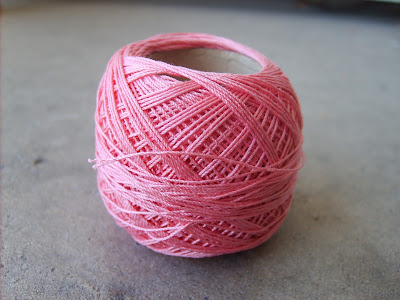 Many years ago my sister bought a box of thread at a garage sale.  What she wanted from it was the sewing thread.  She wasn't too interested in the thicker thread, the kind that people sometimes use for crocheting or other crafts.  I had recently learned how to crochet from a friend and so my sister asked if I'd like all of the thicker thread.  I said sure, not really being aware of just how much there was.

Over the years I've kept that box of thread and crocheted and handful of bean bags and other things with it.  I'll use it to tie a string around gifts from time to time or to hang something.  It's really come in handy a number of times.  And one of those times was this past week.

One of my neighbors put a post up in our neighborhood Facebook group that she had a crocheting project she needed help with and asked that anyone willing to give it a try please let her know.  My first thought was, "I can crochet!  I can help."  And followed close behind was the second thought; "There are probably a lot of other people available who can help her better.  I don't even know how to read crochet patterns and I really only know a couple of stitches."  I almost didn't respond.  But then I did.  I told her I wasn't sure how helpful I'd be, but that I was willing to try.

Well, a couple of days later she stopped by.  She showed me a beautiful headband her grandma had crocheted for her, but it was too big.  She was looking for help to size it down so it would fit her better.  Sadly, after a quick look I could see that I wouldn't be able to fix it.  Not by crocheting, anyway.  To take out any stitches would mean to take the whole thing apart and remake it.  But of course neither of us wanted to undo her grandmother's work.

My next thought was to simply size it down by sewing the excess inside the headband.  I had been working on a sewing project when she stopped by and I already had the machine out.  Perfect!

No, not perfect.  It was too bulky to fit under the presser foot.  Now what?

In a final attempt to be of any use, I offered to hand sew it for her.  She thought it would be worth a try, so I went in search of some thread that might match.  I knew that none of my regular sewing thread was the right color and that it would probably be too weak for a project like this anyway.  So instead I went rummaging through the box of thread my sister had given me, so many years ago.

One pink found.  Too bright.  Another pink found.  Too light.  A sort of mauve-y pink?  Just right.  In fact, this time it really was perfect.  The thread color and the color of the yarn in the headband was an exact match.  And I think that even if I had gone to the store to look for thread in that color I wouldn't have found it.  It was just that perfect.

I've been thinking about that pink thread since she left.  And I've been thinking about how the Lord lets us serve each other.  Her grandmother made her the headband out of kindness and love.  My sister served me by giving me the thread.  My friend served me, all those years ago, by teaching me how to crochet and helping me feel eligible for the task at hand.  And then, this last week, I was able to serve this other sweet friend by using those skills and that thread to continue on in the spirit of all that service that I had received.

We're here to learn and to grow.  And we're here to serve one another.  The Lord won't send angels to lift and to serve when we are able to do the work.  We can be the helping hand, the comfort needed, the happy voice.  We can do the work of the Lord.  He blesses us so that we're able to serve those around us, to serve Him.

Go forth in faith.  You may be, as I was, unsure of your capacity to serve.  But I think you'll find that He always provides a way when we are willing.

Just do your best.  I think you'll always find, in times of need, a bit of pink thread in your box.
Posted by Katie Lewis at 2:27 PM

Nice post, Katie. Did that thread come from me? I bought a box of regular thread at a garage sale, some of it I've used up and some of it, I still have. I just don't remember if there was other stuff in there I gave to you.

I used that regular thread to get my start into machine applique...and those first applique squares I made were what eventually went into the quilts I made for Katie's birthparents when we adopted her...and a wall hanging at Mom's house...and countless other projects.

Your post gave me courage today. Thank you! I love you Katie.

Fantastic post!! I love your outlook on blessings, talents and serving others! I feel the same way!! There have been many times when it seems like I am "hoarding" a particular craft item but the Lord never ceases to send someone my way who is in need of it. We are truly blessed to be a blessing ~ and I was blessed today by reading your post! Thanks again!!