A Chocolate Doughnut with Green Sprinkles Kind of Day 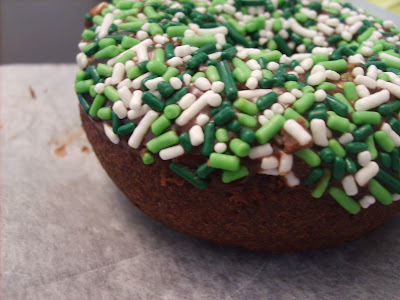 Things have been busy lately, but calm.  It's that sort of business that comes of being a stay-at-home mom.  There's stuff to do--there's always stuff to do--but none of it really has a deadline.  So, more often than not, Bolivia and I spend our days doing what we feel like doing that day.  When it's nice we go outside and play.  When we're up and going in the morning we go out shopping or on a walk.

Today was one of those mornings when we were up and going.  Bryan needed to head to campus anyway, so I figured we'd give him a lift and then head to the thrift store.  Well, we got Bryan off to campus just fine and we got to the thrift store just fine.  But then it turned out that it didn't open for another hour.  Oops.  So instead of going home and then getting back in the car, I figured we'd just doodle around for an hour until it opened.

We drove across the street to the grocery store.  I actually planned our meals out this week, so we didn't really need anything, but I figured we'd just wander around and pick up the few things that I could remember from the shopping list.

Although a new dollar store just opened up next to our favorite grocery store, so first we stopped in there to wander around a little.  Olivia happily carried around some sidewalk chalk like it was a little purse.  We checked out a ball that had a map of the world on it.  I almost bought a few things, but didn't.

Then we headed over to the grocery store.  It's been overcast all morning in just the sort of way that reminds me I'm from Oregon and makes me feel comfortable.  And so, for whatever reason, I felt like getting doughnuts.  Maybe it has something to do with countless walks down to Muno's Bakery as a child.  We'd park our gold/tan/brown Volkswagen van (not what you're picturing, the other kind) at the top of the bluff and ride the elevator down and then walk over to Muno's for some treats.

When I was little I always ordered one or two of those teddy bear cookies.  Sometimes with sprinkles, sometimes not.  One by one I'd munch off an arm and a leg and the head until all that was left was the belly.  And then it was in my belly.  I'm still sad they stopped making them.  If they hadn't stopped I'd buy one every time I went home.

I wasn't really thinking about all this as Olivia and I stood at the grocery store bakery and picked out a couple of doughnuts.  We got a chocolate twist and a chocolate doughnut with chocolate frosting and green sprinkles.  Then we sat at one of the tables next to the bakery and shared the chocolate twist doughnut.  We took turns taking bites until it was in our bellies, washed it down with some good old fashioned tap water, and took the other doughnut out to the car to save for later.

Then, since we still had time to kill, we walked around the store and got the random things on our list--bran, granola bars, fruit snacks, sippy cups.  I also splurged on some new smiley face stickers for Olivia to use on her calendar.  Finally, by the time we had done all this, it was almost time for the thrift store to open.

It's an odd crowd of people who show up at the thrift store right as it opens its doors.  When we pulled into the parking lot I was surprised to see that there was already a little group of people standing next to the doors, waiting for the store to open.  And what surprised me more was that it was a group of rather burly-looking men.  They looked gruff, but cheerful as they stood there chatting.  A few stragglers wandered from their cars to join these eager waiters.  It reminded me a little of watching the crazies line up in the wee hours of the morning for the sock sale at Freddie's on the day after Thanksgiving.  Although this crowd wasn't in any sort of line.  And I doubt any of them bought socks.

Once the doors opened Olivia and I got out and went into the store.  She munched on some Smarties the cashier at the grocery store had given  her.  I looked at toys and sewing supplies and old sheets and children's books.  Among other things, I bought one of those hanging baskets--you know, the set of three hanging wire baskets that people hang in their kitchens to hold fruit and onions and things?  I almost didn't buy it.  But then I did.  I'm pretty sure Bryan will give me that look when he sees it.  And I'm still not entirely sure if I want it, but I think I do.

When we got home Olivia had leaked through her diaper and her jammies (yes, she wore jammies all over town this morning), so we changed her diaper and got her dressed.  When I told her we needed to put her shoes on, she insisted on wearing her "boops" (boots).  So I put away the shoes that I had in my hand and got out her funky purple Fisher Price snow boots that were clearly made in the early '90's.  Then we walked over to our friend's house for our little neighborhood preschool.

Our lives will be changing a lot soon.  We'll be moving across the country.  Bryan will be starting optometry school.  New apartment.  New friends.  New city.  And I'm going to have to work for the first year.  Have I told you that yet?  I'm not sure yet where I'll work or what kind of hours it'll be, but I know there will be days when our lives are much busier than they are now.  And on those kind of days, it's this kind of day that I want to remember.
Posted by Katie Lewis at 2:35 PM

Confession- the donut had me at "hello". I really enjoyed all of this post, though.

I was just going to come on here and ask you if you've had any luck finding work yet. If you are driving through st. louis be sure to stop by for a free nights stay :). Donuts sound really good right now. I miss Maceys.

What a lovely, lovely day. And a lovely donut, too.

I like this day. I look forward to these types of days. And I know you'll have these types of days again after the craziness of optometry school and work is over. :) And don't worry - even on the hectic and crazy days you can still get green sprinkled donuts. :)

Love you!!! Thanks for saying hello the other day!

We'll be driving through your new city at the end of June. I don't think you'll be there yet, but we'll stop and say hello for you.

what a sweet day for such a sweet little family! :D

I think missed the post where you told us where you are moving to. Fill me in! Sounds like a lovely sort of day. You make me want a donut bad!