One things leads to another 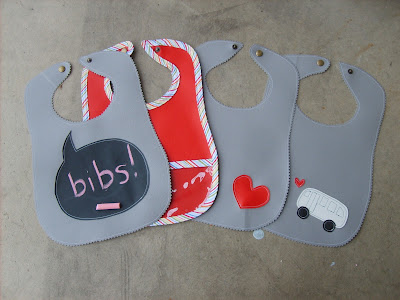 Some time ago we picked up some fairly junky plastic baby bibs for free at a neighborhood swap.  I liked the basic design of the bibs, but I wasn't nuts about the prints or the inherent junkiness.  Also, they had velcro closures and--at the time--Olivia was going through a major bib-hating phase.  In about two seconds flat she could yank off any bib and throw it on the ground... which made meal times frustrating.

I had recently tried the whole metal snap thing and decided to see if it would work on a bib.  I was relieved when I finished the bib and found that, not only did it look a lot nicer than its junky ancestor, but Olivia couldn't pull it off.  Hooray!  Complete control over my child again!  Heh heh... I mean... well, you know how it is.

Anyway, we've used that trial-run bib for months now and it has held up awesomely.  But ever since I made the Circus Stripes bias tape I've been itching to try it out on a new bib. 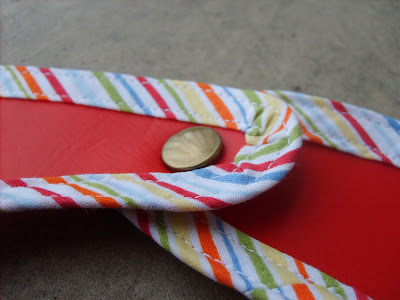 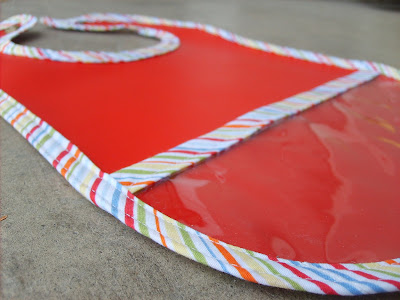 Oooh.  Ahhh.
But making one thing often leads to making other things. 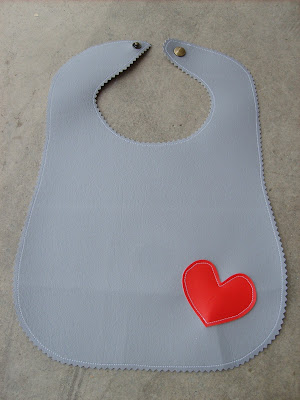 So soon after came the Simple Love bib. 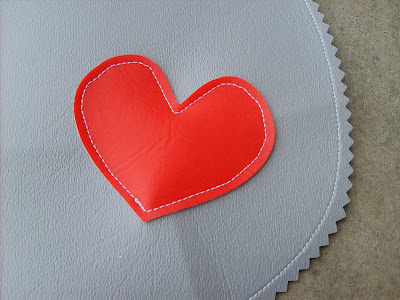 Those were made two nights ago.  Then last night as I was showing them off to Bryan we were just casually chatting about bibs.  Olivia has made a complete 180 since her bib-hating phase and now has a sort of bib fetish.  She'll get them from her high chair and request to have them put on all the time.   And then she proceeds to walk around the house with her bib on for hours.

But bibs aren't her only fetish.  She also has a major kind of love for all things bus.  On more than one occasion I've tried to calm her tears from the drivers seat while she wails in her carseat demanding requesting that a bus drive by.  Much to Olivia's dismay, I do not have special bus-calling capabilities.

But last night when Bryan and I were talking about her bib and bus fetishes I had one of those brilliant moments and laughingly told Bryan, "You know what Olivia would really love?  A bib with a bus."

So, because I love my daughter, this morning I whipped up a quick little something for her. 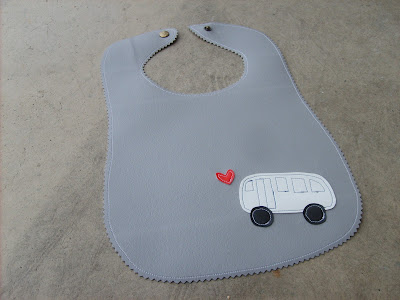 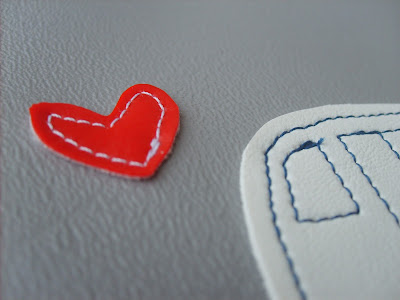 But even this seemingly-culminating event lead to something else.

Because I didn't have any black vinyl on hand, I pulled out some chalk cloth I've had sitting in my stash for a while and cut some little circles for the wheels of the bus.  And once the chalk cloth was out, it was kind of inevitable, right? 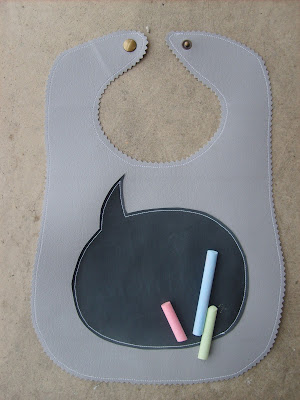 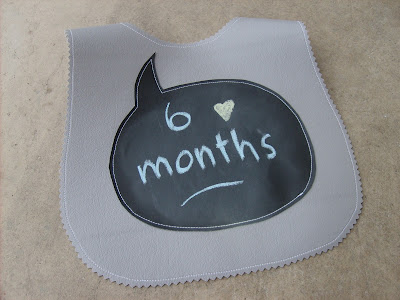 Great for taking month-to-month photos of your brand new one. 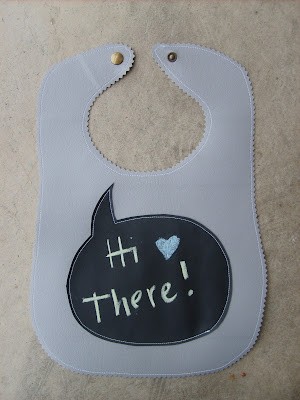 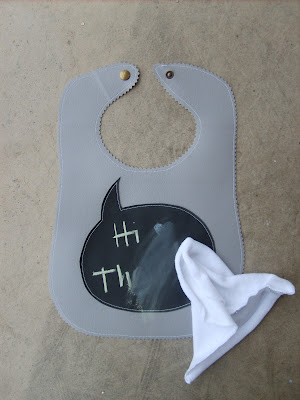 And you can always wipe it off and write something new!

Have you had one thing lead to another lately?
Posted by Katie Lewis at 1:58 PM

Nice job, Katie! I love the quotable one...and the vinyl looks like it wouldn't be too hard to make...since it doesn't require all the edging.

So cute. I love your original ideas. And I love that bias tape. SO cute!

Wow! What a cute idea!

What she really wants to say on her bib is, "Hi Grandma!"

Too cute! I love it!

Awesome, we use snaps too, only we had our done with plastic snaps, we just put them in with our diapers when we got them snapped. I love the snaps because my son can't get them off, like velcro or over the head ones.

really cute! but doesn't all the mess just slide right off the plastic and onto the floor or the baby's clothes?

These are so cute! You are so creative!
Also, I LOVED reading that Olivia has a bus fetish. How funny is that!? Hopefully it will last all the way through her school years so you won't have any tears as she gets on the bus each morning.

These are way too cool katie. LOVE it!

I just love seeing the products of your creativity! These are way cute. What kind of material did you use? They look more hardy than plain fabric...

Thanks for sharing again!