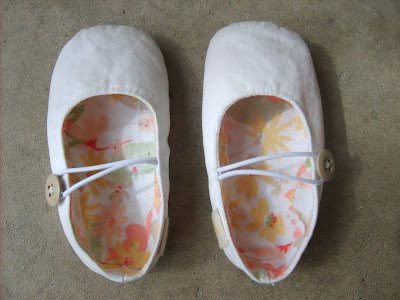 A while back I got my hands on the pattern for these adorable shoes (available for sale at Winter Peach--only $4.50 right now!) 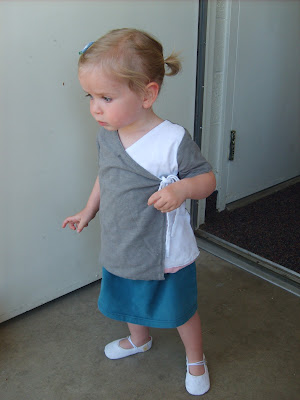 They're sweet, comfy little shoes.  Olivia and I have been loving this pair on her for months now. 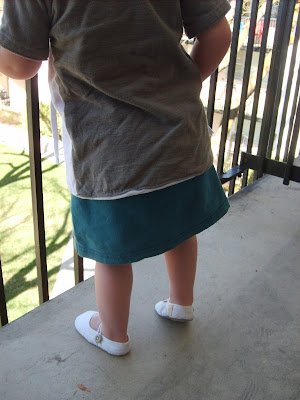 Partly because it's been so cold all winter and party because these little shoes are white, I haven't really let Olivia wear them outside to play.  But now that it's warmer (and because her feet are growing and she'll need a new pair soon anyway) I figured she might as well get as much use out of them as possible.
So I've been letting her wear them around more--outside and out on errands and things.  But... they're a little slippery.  Not so great for a kid who's just starting to run.  We've had a few tears from nasty bonks already. 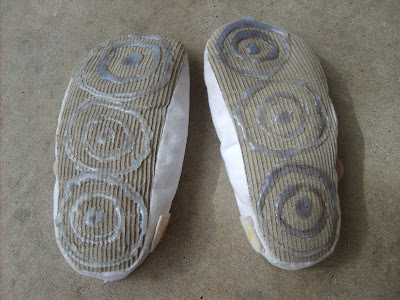 So today I gave the bottoms of the shoes a little tread treatment.  It took about 5 minutes tops and was inspired by a brief mention of this method on Under The Sycamore a while back (I'd link to the specific post, but I honestly wouldn't even know how to search for it since she just mentioned it in passing).

Basically, I just drew some circles on the bottom
of the shoes with hot glue. 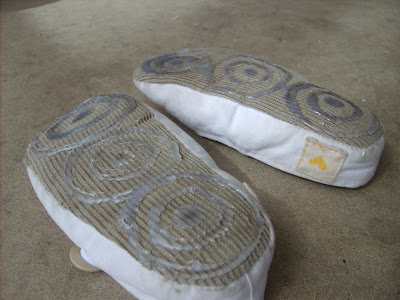 Initially I had just put some nice, tidy little lines across the bottom, but I made the mistake of leaving these shoes on Olivia when I put her down for her nap.  By the time I went in to get her after she woke up, she had pulled off almost all of those lines.  Thank you, product tester Olivia.

So when she went down for her second nap (don't too be jealous that she usually still takes two) I tried again, this time making circles and smooshed the glue down into the shoe more.  Hopefully she won't be able to pull the glue off this time.  Although I feel pretty confident that she won't be able to since I tried and wasn't able to pull it off. 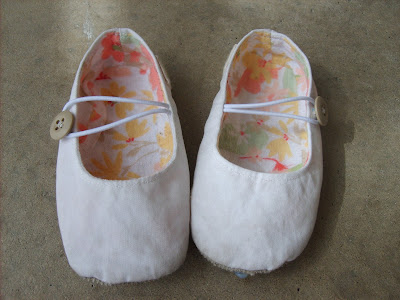 So now she has some cheap, easy tread
on the bottom of her cute little shoes.
Slippery linoleum, here we come.
Posted by Katie Lewis at 6:37 PM

I've seen these shoes before and think they are adorable!! I maybe have to get my hands on this pattern when my youngest starts to walk. Love your blog Katie! I've been a follower for a while, you are very creative and have inspired me numerous times. Check out my blog(s). ;o)

What a smart mama. I love those shoes. And the skort. And the top. And mostly the little girl inside all the cute clothes. Hey, maybe I'll get a pattern in my size and make some new temple slippers for myself.

Olivia is getting so big. It makes me kind of sad that I haven't seen her in so long. She looks so old! Not old like Harriot Grandmother of Faith, but old like no longer the little baby I remember her as. Cutie. And that idea for the shoes was genius. I don't think I would have ever thought of that.

Great idea...and I can totally see my kids pulling the glue off like Olivia...funny :)

Such a cute little shoe. I think I'll have to get the pattern and try this out for my little love bug. Love your blog and tutorials. So inspiring.

Brilliant. I know they also sell the textured non-skid dot fabric in the utility fabric section at Jo-Anne's, but this is way cheaper!

I love that shirt she is wearing...I haven't made one for Sadie yet, but I just might now that I see how cute Olivia's looks on her!

So cute! And such a great idea!! I think I should do this to the bottom of my kids' footie jammies, too!!