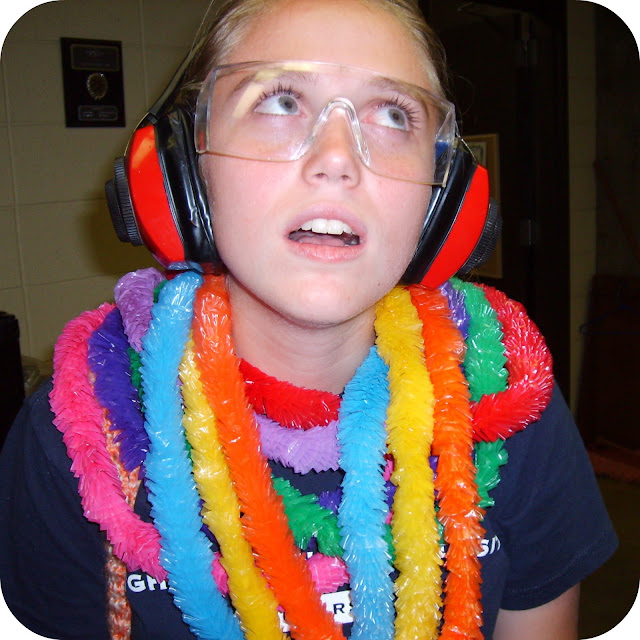 Most of the family I married into*, on the other hand, lives life on the opposite end of the day.  I won't tell you which one of them wakes up at (at least) 5:00 every morning and which one of them is cranky if they don't get to bed before 11pm.  But I will tell you that Bryan falls somewhere in the middle.  So it won't surprise you to know that he's conked out up on the couch right now.  And he'll probably read this in the morning before I get up.

*Bryan's youngest brother has us all schooled.  I'm not sure he slept at all last Christmas.  Oh wait, except for the fact that he didn't wake up until it was afternoon.

But back to me.  (As usual.)  See, there are some good things about being a night owl.  Mostly, it means I get things done at night.  Night time cleaning raids are often my most successful.  Sewing at night?  Creative juices flowing?  Check and check.

But there are also plenty of downsides.  Like, for instance, the fact that I never want to take tutorial pictures as I make things because the lighting is terrible.  (Nevermind the fact that my studio is located in our basement with all of one very tiny window now.) Also?  Late nights do not lend themselves well to, ya know, waking up early the next morning.  And late wake-ups aren't great for exercising.  Or showering.  Can you see where I'm going here?

If your mental image is accurate, it should lead you to an image of me that makes you wonder, "Is she pregnant?"  Except I'm not.  I've just been staying up late and not getting up early to go on walks or go running or something.  And I may or may not have eaten twelve one too many Oreos.  And tonight we had some super yummy pazookies that I conned Bryan into making.

So here's my thing.  I'd like to lose weight and be uber skinny and pretty, but not have to wake up early and go running.  And I'd still like to eat at least one or two desserts every day.  And I'd like to not be made into a robot of some sort.

Gah.  It's hard to make good choices sometimes, you know?  Treats vs. being pretty and skinny... it should be an obvious answer.  But it's just not.  Not when there are cookies involved.

I think you need to take "pretty and skinny" realize skinny does not += pretty. You are beautiful Katie, just the way you are.

ha! i totally agree! i've made cookies every night this week and every morning i commit to being better until a summer thunderstorm comes in at night, and that's the perfect setting for cookies and milk, right?

Intuitive Eating by Evelyn Tribole and Elyse Resch. Check it out from your library and give it a read. It has changed the way I eat and think about eating. It is all about giving yourself permission to eat what you want to eat without restrictions. When nothing is off limits, there isn't the urgency to eat all the cookies now because I won't be able to eat them anymore as soon as I decided to start being "good" again. Part of the reason forbidden food is so good is because it is forbidden. When it is ok to eat it whenever you want, it looses some of it's appeal.

We have had a stash of m&m's since I have read that book. I take pleasure in enjoying them, but I don't have to stuff myself with them because I know they will be there again when I want them next. And you know what? I'm still losing weight. I think the guilt is what weighs the most. :)

Katie you are one of the prettiest girls I know! And I sincerely mean that, I've always thought that. I hope you are loving your new area! Oliva is getting so much older, I love her hair. Miss you!

Ok. I have to second meaningfulmothering. You mentioned "skinny and pretty" twice. I've actually been thinking about this A LOT lately, about the perception of beauty. Skinny does not equal pretty.
Anyway, back to your question: what about doing workout videos or having a dance party, inside, where it's not so hot?
Or choose treats like Anna's spinach chocolate pudding! hahaha. jk jk. (or not...)

Concerning the late night crafting~Maybe you could try an OttLite lamp--they are supposed to be like having natural light for your craft area. JoAnns has sales on them pretty often (like now).

I am a huge night owl too, and I wake up later because of it. I've always been like that. My poor hubby gets tired of it sometimes.

I always exercise better in the early evening, or in the afternoon. I think they say to not exercise 3 hrs or less before bed time. And I always preferred night running. Although it depends on where you live...

I totally have the same problem. I am not a morning person at all. In fact, I hate mornings. Boyd and I work out at night. I know it is harder with kids, but working out at night is so nice. Then you can come home and shower and go to bed. I have never been much of a morning worker outer. The other thing I have learned is to still eat treats. It sounds crazy, but when I do eat cookies I'll just make 3, 2 for Boyd and 1 for myself. I still get a treat, but I'm not eating a lot (plus I use a small cookie scoop) The other thing we do is ration out M&Ms. We will put 20 in a bowl and we can't have more than that in a day. Since we have been working out at night and eating smaller portioned treats I've lost 10 lbs and still loosing weight. You are so pretty and don't worry about your weight, but I know that these things have helped me.

I kind of had to laugh about what you wrote about the whole staying-up-late-and-sleeping-in thing. Because I was lying in bed for the last hour telling myself to go to sleep and wondering why it is that I can never be sleepy at night even though I can hardly drag my sorry self out of bed in the morning. Especially because my mom is one of those people that is up by four and has done all sorts of amazing things before I show up hours later.

So anyways, after over an hour of staring at the ceiling hoping to drift off, I decided to pop out of bed and read blogs. Cuz that's what your supposed to do when you can't sleep right?

I guess the take-home message of this entirely too long comment is that it makes me glad that not everyone is as good at the whole early to bed early to rise thing. Because even though I have tried to fight it my whole life, I'm a night owl. I'm glad I'm not the only one.

Ugh. I feel you. I hate when people say things like, "Nothing tastes as good as skinny feels."
WHO ARE THESE PEOPLE?

It's too hard. And I wrestle so much between what I want now, and later. Why can't I just have both? It's so unfair!

I run at night. Not that that helps me lose weight. I'm not sure what does, actually.