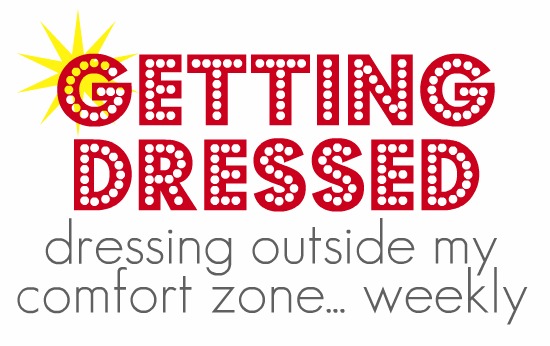 Some of you seem to be under a false impression that I'm cool.  I'm not.

So when I sheepishly started my Style board on Pinterest I kind of hoped nobody would notice.  But then my good (real life) friend Lauren saw that I pinned this adorable outfit and told me I should--ahem--actually try and wear some of the things I had been pinning.

While I don't actually own anything that I've been pinning (I'm not cool, remember?) I did accept Lauren's challenge to dress outside my comfort zone one day each week and blog about it.

Thus, the birth of a new weekly series here that I have geniusly titled: Getting Dressed.
(So original, I know.) 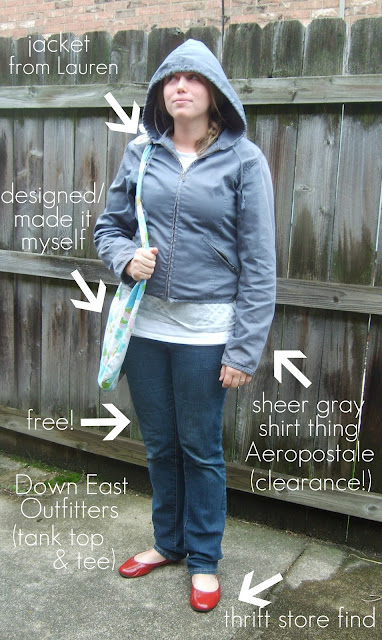 Obviously it'll be a major work in progress.  Because, admittedly, this outfit wasn't really out of my comfort zone.  But it was right on the very edge of it.

For instance, see that side pony tail hiding inside the hood?  Right on the edge of my comfort zone.
Not to mention the fact that my hair isn't neatly pulled back so it's completely out of my face.  I hate having hair in my face.

But I'll tell you what, spending more than five minutes picking out what I was going to wear this morning (and actually brushing and thinking about how to do my hair) was waaaaay outside my comfort zone.  Way way outside.

And even though I settled on something that was right on the edge of my comfort zone instead of actually outside it, I did spend at least 15-20 minutes in my room picking through clothes and trying different things on.  I think--honestly--the last time I did that was for my sister-in-law's wedding back in December.  Fo reals.

So, there you have it.  Little old me in a (slightly) cooler outfit than usual.

So cool, in fact, that when I explained this whole thing to my good friend who took the picture (Thanks again!) she replied, "I totally noticed!"  Haha.  Not sure if that's good or bad...

I'm so excited for these new posting! :) I love your outfit and I did notice your hair! I think it looks really good that way! :)

Also, I miss you! :) We put something in the mail for you and Lala today!

Clothes are fun! I'm excited to see you get out of your comfort zone! :)

Ooh yes I love this, too! More more more. And the side ponytail is so favulous. I won't correct the "v", just for you.

So first...I can say all this because I'm your sister...

But I didn't noticed your hair because I can't really see it. What's with the hood if you did your hair cute? (This is probably the totally unstylish side of me speaking, since for all I know, hoods up are totally in.)

I've been thinking about starting a similar "cooler dressing" attempt myself, but can't quite bring myself to do it.

I recently made a pile in my closet of things I need to wear in the next month or get rid of...I used to be cool and wear them but mommyhood and super hot temperatures really puts a damper on that and I find myself thinking "I would never have gone out like this before I was married" almost daily...so good luck! I need your inspiration in this area :)

Maybe I should join you and put my sweats back in the drawer once a week... Hm, or maybe I should try to rock the side ponytail, although, maybe not because I'm pretty sure the only way I could "rock" a curly, afro side ponytail would be to take a time machine back to 1987.