Ohio and My Testimony 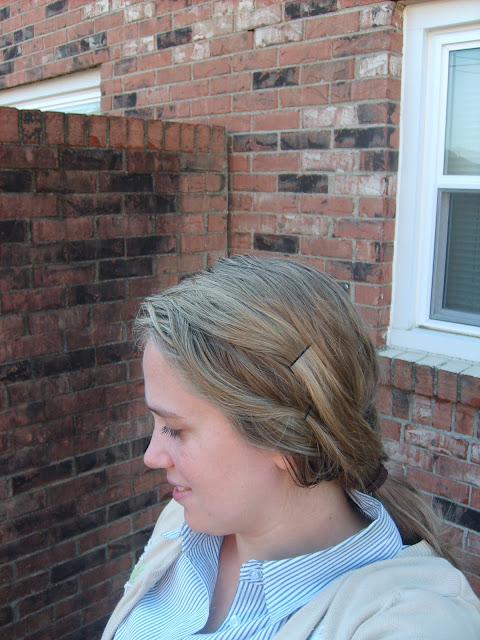 Some of my family is still in Oregon.  And some of my best friends in the whole world.  Also, I think there is some version of me that lingers there.

I've been thinking about my Oregonian self more and more since we moved to Ohio.  My mind wanders to who I was in high school and it baffles me sometimes.

I was so outgoing.  I was thoroughly involved in the theater program at my school.  I was in all the drama classes and a number of school plays.  Being on stage and singing and dancing in front of people came so naturally to me then.  Now?  The thought of being on stage is... nostalgic.  And nerve-wracking.  I hope not to have that experience anytime soon.

But I think what amazes me more about my high school self than being in plays is the way I used to share my testimony of the gospel of Jesus Christ.  I was fierce about it.

I have a very vivid memory of a cast party I attended when I was a senior in high school.  I arrived late and, when I did, I found my good friend (and a fellow member of my church) sitting outside on the steps.  She was alone and looked uncomfortable and I asked what was going on.  She told me that some of the kids inside were watching an inappropriate movie and she didn't want to be a part of it.

I was furious.  I still remember.  I walked into the party, confronted the boys who were the instigators, and told them that it was inappropriate and they needed to turn it off.  They protested, saying that it wasn't an R rated movie (they knew we Mormon kids didn't watch R rated movies).  They said it wasn't rated, it was just a film somebody's brother had made.

This wasn't the only instance like that in my memory.  But for some reason it is the one that always stands out in my mind when I think about who I was in high school.

I remember how different it felt to be at college.  Of course I was more shy, not being surrounded by people I had known a long time.  But the bigger difference was that I attended Brigham Young University--a church school--and suddenly everybody around me shared my beliefs.  It seemed to me that so much of who I was in high school was how I was not like so many of my classmates.  Now, surrounded by people so similar to me, what use was there in standing up for my beliefs?  Everyone else would just stand up right along with me.

I remained at BYU for seven years.  That's what happens when you marry someone your own age who is two years behind you in school after serving a mission and then changes his major a year before he's supposed to graduate.  So even though I finished my studies at BYU in the normal four years, I was there an extra long time.

I remember how much I hated Utah when I first arrived there.  The mountains were too close.  The Mormon culture was too weird--even to me who had grown up as a faithful member of the church.  And the grid system.  How would I ever find my way around?  It was all so foreign.

But I admit that, since we moved this past summer, I've found myself getting a little lost driving around.  More than a few times I've naively thought, "I'll just turn down this road and it'll connect to that other road in a block or two."  And then, when the road curves and then curves again and sends me completely away from my destination, I realize I'm not in Utah anymore.

I have the same realization every time I see someone smoking and every time one of my co-workers swears.  It's a reminder that things are different here.  And they are.  Although it's not completely foreign to me.  There is something familiar about it.  It's like being in Oregon.

I'm different again here.  Not so much in our complex where there are an abnormal number of LDS members to keep us company.  But at work and when we go out, I'm reminded again and again that my standards are not the same as those around me.  My beliefs are not the same.

To so many people around me, Sunday is another play day.  To me, it is a holy day.  A day of worship and service and rest.

To so many others, living beyond your means is normal.  You just see something you want and then you buy it.  Nevermind whether your have the money for it or not.  I believe in being a good steward, living within my means, and trying to have enough time and money and room in my thoughts available to give to others.

And no difference is quite so striking as being a wife and mother at 25... and being quite happy and content about it.

The Oregon me was so bold.  The Ohio me is so quiet.  But I think that both, in their own right--and in their own age and circumstance--are appropriate.

In Oregon I was a teenager, surrounded by friends and classmates.  We were all young and so impressionable.  And, at least at the time, it seemed to me that the only way to make an immediate and important impression on my friends was to be bold with them.  After all, who notices the girl who doesn't say anything?

I think I was right to be that way then, but it's not who I am now.  At least, not to that degree.

Here in Ohio, I'm not a teenager surrounded by friends anymore.  I'm a young adult--and a wife and a mother--surrounded mostly by strangers.  Oh, we've made good friends here already, of course.  But, in general, I'm still new here.  And I don't know that being so bold on first impressions would have the effect I'd hope for.

Also, I genuinely value people for who they are and what they believe, whether they share my beliefs or not.  When I meet people, I want them to feel comfortable and safe, not constantly on guard.  If I do share the gospel with those around me here (and I hope I do), I want it to be through genuine friendship.  I want them to know that I'm sharing my beliefs with them because I care about them and because I trust them.

Sharing my testimony with others is not a matter of checking someone's name off of an infinite list.  It's a matter of sharing an infinite amount of the Savior's love, even if it's just with one or two people.

All of this, I guess, is why I tend more to attempt to share the gospel more though my example and my day-to-day living than just through my words.  I do hope I'm wrong about what I said before.  I hope people do notice the girl who doesn't say anything.

But, most of all, I hope they notice that even though I'm desperately far from perfect, I am trying to be like Jesus.  I am trying to love and encourage those around me.

I hope that that's true.  I hope that I'm living and behaving in such a way that others would be curious about it and want to know what I believe.  I hope they can tell from the way I live and behave that I believe in Jesus Christ.  And, if they can see those things in me, I hope their lives will be better for it somehow.  Not for my sake, but for theirs.

I feel peace and comfort and direction from the Lord as I study the scriptures and as I go to church.  It is so easy to feel the Spirit when I do those things.

I know that no matter where we are in life and no matter what mistakes we've made, there is always hope for a bright and happy future.

And I know that God, our Heavenly Father, has a divine plan of happiness for each of us.  We were known to him before we were born, we are known to him now--each of us, individually--and we will continue on after this life.

There is so much joy to be had in the gospel of Jesus Christ.  And I want so much to share that joy.

Do my actions say that?  I hope so.

Thank you for sharing. You have many good points, and many things to think about I appreciate it. And as hard as Utah is, I guess you have given me a challenge to live in a way more like my Savior.

Beautifully written! I have always heard that Utah is totally a "bubble" and hearing your point of view was really eye-opening to me. I admire your strength and courage . . . both when you were in high school and now in Ohio. You are awesome! Thanks for sharing this today!
Have a good Sunday!
Camille

Thanks for the thoughts. Here are a few random ones of my own...I think a lot of the boldness in high school comes because we're almost constantly surrounded by peers then...many of whom were experimenting with their own standards and pushing against them...and because we were around them so much we had to stand up more. Now as stay-at-home mom's we spend so much more of our time in our homes where we have a little more control over our surroundings, we're not put in situations so much where we need to stand up. You'll find they come more when you Olivia starts school...like the day my kindergartener came home with a drink, provided by the school, that she knew she wouldn't be allowed to drink and I had to write a letter to her principal about it. And as nice as BYU was as a place to go to college, I think in some ways it can be harder for kids growing up in the younger grades. There are still plenty of kids there that do things that are against our standards...but they're Mormon too...so the "I don't do that because I'm LDS doesn't always work as well."

How funny--you spent high school in Oregon and then moved to Utah and Ohio.

I spent high school in New Mexico and then moved to Utah and am now living in Oregon.

I agree--everyone else thinks it rains a lot here, but I find it only actually rains in the winter, in place of snow. Minus summer, when it's so dry the grass turns yellow, it just drizzles and spits one entire day out of every two or three days.

For every time and season--I hope you find that in a different stage of life, when you're not home as much and you're comfortable with your city and state, you will be more bold.

I hope this stage of quiet doesn't last your entire lifetime. I met many people in Utah who had been living the "passive missionary by example alone" season for their entire lives, minus the two years they were an active missionary. That's not enough, and that's not a season. That's a sad habit.

I hope you conscientiously change your missionary approach as another stage of life appears. Maybe when you become the mother of teenage kids, you're a member of the PTA, you own your own business, your kids play soccer and you interact with other adults on a much more active basis. You have an effective voice--this blog proves it. When the season of your life changes, you can choose to break out of the quiet missionary stance as well.

Katie, I love this post. Very well stated. By the way, Olivia is a doll!