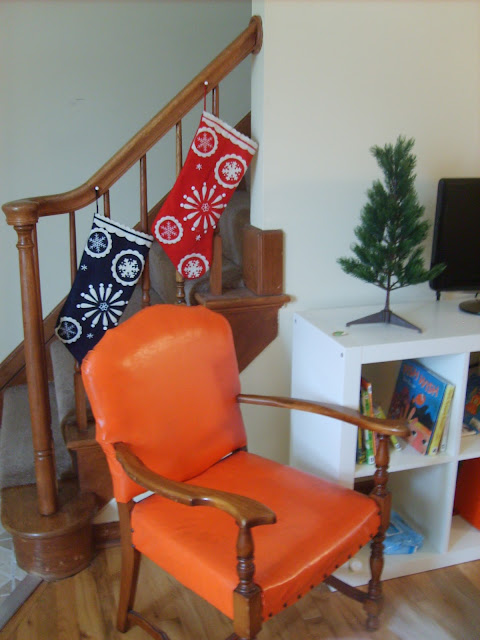 Christmas morning was always happy in the home I grew up in.  And I hope my parents won't be offended by my saying so, but the fact that I always remember Christmas morning as being a happy time is really saying something.  My parents divorced when I was little and from there on out the Christmas season brought on an endless round of visitation schedules that I was never a fan of, even as a little kid.  But somehow none of that ever seemed to touch Christmas morning.

In all the overthrow that divorce and remarriage brings on a household, some traditions went the way of the wind.  Which is okay.  Because even if the change hadn't been caused by rearranging our family, it would have been brought on by siblings growing up and moving out and getting married and having their own kids.

I know because that's what happened.  I'm the youngest of five kids.  And my step dad has three kids.  And my step mom has five kids.  And later my mom and step dad adopted a daughter.  But all of those siblings (except for my little step brother) are older than me.  So I watched a lot of siblings grow up, move out, get married, and have children of their own.  And of course all of those things are a good part of growing up, but they do tend to change the way traditions work.

But before we all grew up and moved out and got married and started having children of our own, there was Christmas morning at home.  We ate homemade cherry pie with whipped cream for breakfast.  We stayed in our pajamas and took turns opening Christmas presents one at a time so the fun of opening gifts would last for hours.  We got calls from grandparents wishing us a Merry Christmas.  We'd spend the afternoon and evening tinkering with our gifts and feeling happy.  But before we ate cherry pie and opened presents, we came down the stairs and opened our stockings.

My stocking growing up was a red felt stocking with a white brim and on the front there was a little patch with a picture of Santa holding a kitty.  We hung our stockings on the back side of the stair railing so that each of us had our stockings hanging above a stair.  And usually our stockings were so full that the goodies spilled out onto the stair, which made for a rather exciting sight to come down to on Christmas morning.

I don't remember when it started, but one of my sisters and I got in the habit of waking up around 3:00 or 4:00 in the morning and sneaking down to take a peek at our stockings.  We never set an alarm, but the excitement of Christmas morning woke us up like clockwork each year and even as teenagers and young adults if you had sat on the stairs very early on Christmas morning you would have found Kendra and me sneaking down around 3:00 or 4:00 am.

You would have seen us quietly tiptoe down the stairs, trying not to make the old farm house creak.  Then we would sit on the stair by our stockings and carefully, quietly take out each treasure inside and place it on the stair next to us.  Once finished we would silently re-pack our little stocking so it looked just like it did when we found it, as if it had never been touched.  Then we'd go back to bed and sleep a while longer and when we got up again later we'd open our stockings again--not quite so carefully; we already knew what was in them--and thank "Santa" for all the fun treasures inside. 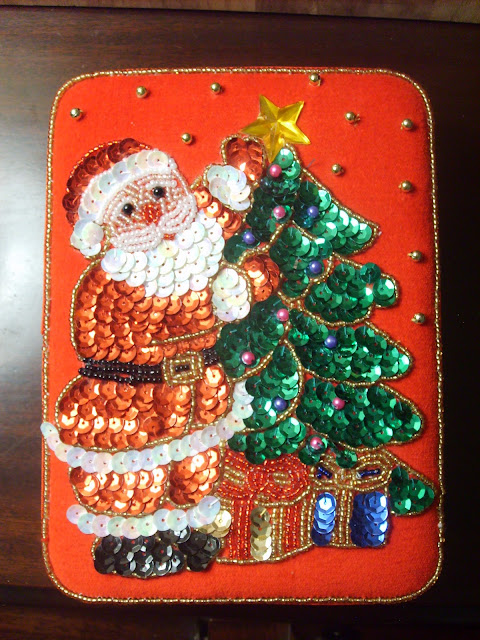 It's funny, though.  In all those years, despite all of my sneaking around, I never once caught my mom packing up all our stockings.  But I also never actually believed in Santa Claus.  I guess it's just what happens when you're the youngest.  You pick up on things like that.  I was never sad about it or anything, it was just the way it was.

But now that I have my own little girl, I've been thinking about Santa again.  I'm pretty sure if we took Olivia to see Santa and tried to actually make her sit on his lap, she'd be absolutely traumatized--tears and kicking and all the works.  So obviously we haven't done that.  But she does love to point out all the little Santa clad things around her.

And who can blame her?  He's a cute, fun, jolly old man and a totally recognizable iconic figure.  Everywhere we go we see Santa--blow-up lawn ornaments, pictures, pictures of things with Santa hats, etc., etc., etc.  And I'm not about to spoil her fun by sitting her down and giving her some depressing talk about how Santa's not really the one who puts fun candy and toys in her stocking on Christmas Eve.  I see no harm in passing on a tradition that I enjoyed so much in my own childhood.

That being said, I'm also not about to sit her down and explain that Santa is the one who puts candy and toys in her stocking.  I don't really believe in lying to children, especially over something like that.  I don't think she would be one bit sad to know who really puts things in the stocking she finds on Christmas morning.  And all the better, in my opinion, to know who to thank for the sweet little gifts. 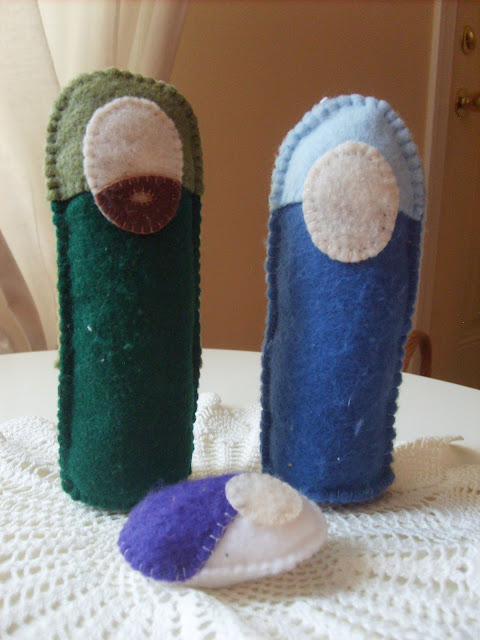 I have a hard time, sometimes, wrapping my head around how to explain what Christmas is.  Of course it's a celebration of the birth of Christ, but the way we celebrate Christmas here now doesn't make a lot of sense when you try and mesh Christmas trees and brightly wrapped presents and snow snow snow and reindeer and Santa Claus.

Christ was born in a manger.  And a new star did appear.  And while the shepherds did come to see the newborn King right away, the wise men didn't find him until years later.  And nowhere in the Christmas story does it mention snow or Christmas trees or any of the other somewhat ridiculous things we tend to include in our celebrations.  (Okay, some things like Christmas trees and candy canes do symbolize nice meaningful things, but it's still a little far-fetched.)

BUT.  I actually don't care very much about the the things that don't mesh 100%.  I do want Olivia to know what really happened.  But, perhaps more importantly, I want her to feel the love of Christ on Christmas.  I want her to recognize that we give gifts because Christ gave us the gift of his life.

The commercial symbols of the season don't always translate very well for me into what Christmas means at the heart.  But I think that's okay.  Because a big part of Christmas is simply taking the time to be together as family, to give good gifts, to think of others, to share a wonderful holiday.

I think if Christ came to visit for Christmas he wouldn't mind the Christmas trees or candy canes or even Santa Claus.  I think He would be happy just to give good gifts and spend time with the ones he loves.

Figuring out what a holiday means exactly can be complicated and messy. 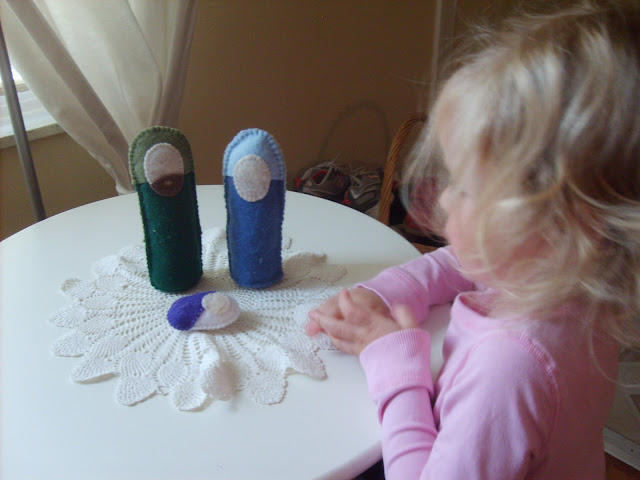 Unless, of course, it's not.

Such a thoughtful reflection. I, too, am still sorting through the many meanings of Christmas. I am definitely tired of the commercial hoopla. And I definitely want to focus on the incomparable gift of Christ's birth and life. I think I am happiest about the Christmas gifts I give when they are handmade and I have put something of myself into them. Thank you for sharing your thoughts on Christmas.

I love what you said about Christ coming and sharing our Christmas and how He would enjoy the wonderful time of the year and not really mind Santa, etc. so much. I love that. I think you're absolutely right. Thanks for sharing that. I feel this way too sometimes - that I don't quite know how to be excited about my gifts and gift-giving and at the same time focus quietly on the Savior. But I think you summed it really well. Enjoy time with family, gift giving, and remembering why we give gifts.

I hope you have a lovely Christmas!!!

We've chosen to allow the kids to enjoy Santa from afar, told them not to spoil the make believe for other families, told the story of the monk who is embodied in the tradition, but absolutely focus on Jesus.

The only things we ABSOLUTELY do as a consistent family tradition every Christmas is go to Christmas Eve service, read the Christ's birth story, and make a birthday cake for Jesus. The rest, we do sometimes, and not other times.

Have a blessed Lord's birthday.

I loved this!! Thank you for sharing your thoughts on Christmas :)

So true! We have never made a big deal about Santa at our house. The stockings come from "Santa" but all the main presents come from Mom and Dad (or whoever sent them) and any time a kid asks us a question about Santa, we've told them he's pretend, but then talk about it's a fun idea, don't talk about it with your friends, etc. My Katie still had fun going and telling Santa what she wanted for Christmas even though she knew he wasn't really real. She's never been sad or crushed to know he's not real either.

We have been having this same discussion a lot recently. I don't want to destroy the magic of Santa Claus, but I don't want to lie to the kids either. There is just SO much commercialization that Christmas is becoming less and less a celebration of the Savior. So sad!

Well said. I am looking forward to that day when I can share with my son(hes a too small now) the real meaning of Christmas. I can honestly say I wouldn't miss Santa too much if we took him out all together.
Thank you for sharing.
SassaFrass