Last weekend my sister Kendra and my sister-in-law Holly flew in for a girls weekend.  (YAY!)  We all live in different parts of the country now and hardly ever get to see each other,* so it was especially fun to have this time together.  And, no offense to children, but it was so fun to get together without children!

Holly and Kendra got in pretty late Thursday night, so of course we didn't plan to do anything but go to bed.  And then of course our plans flew out the window when we stayed up chatting until 2am.  Which, coincidentally, meant that our guests slept in until 9am the following morning.  :)  But that's the kind of special treat you should enjoy when you're having a kid-free weekend, right?  Right.

*I have a lot of other sisters and sisters-in-law.  I like you too.  Sorry you couldn't all be here.


On Friday (after Kendra and Holly finally graced us with their presence), we girls (including Olivia) went clothes shopping.  I exercised a lot self restraint, but still came away with a really cute new cowl neck sweatshirt.  Sorry, but $6 clearance for something amazingly cute and comfy is just something I cannot walk away from.  The $14 shirt that had a huge rip in the side that I offered the sales clerk $3 for and she scoffed at me?  That I can definitely walk away from.  Boo-yah in yo face, Target.  Umm, and also thanks for the cute $6 cowl neck sweatshirt.

Confession: Kendra and I have matchy-matchy $6 dark blue cowl neck sweatshirts now.  At least we didn't wear them on the same day.

Friday was also the Brown Bag epic fail.  Whatevs.  It was still fun.  And all the more fun with Kendra and Holly there.

On Saturday we made the 2 hour trek to Ikea.  Sans children.  Bryan and Olivia happily stayed home while we girls went out for a day of Ikea goodness.

First stop: Ikea restaurant for some lunch.  (Okay, so actually the first stop was at the McDonald's along the way because all three of us had to pee real bad.  I blame it on the insane amounts of water Kendra and I were downing.  Apparently we're both allergic to the eastern half of the United States and it makes our throats scratchy.  And then we drink a lot of water.  And then we have to pee at McDonald's.)  Anyway, the first stop at Ikea was to the restaurant.  I'm not going to name any names here, but someone who married my brother was sneaky and paid for all of our lunch.  No wonder she sneaked up to the front of the line.  And talked us into the yummy soup and salad.  Mmm.

After a very enjoyable, non-whiny kid infested lunch, we set out on the shopping game that is Ikea.  If Kendra could have packed desks and tables into her suitcases, she would have done it.  Holly, on the other hand, exercised some major self-restraint and only bought four place mats.  Who does that?  I have never seen such focus and control.  Though it may have had something to do with the fact that she had to fit everything into her already-full carry on.  And the fact that my brother travels to a city with an Ikea in it fairly frequently.  But still.

I came out somewhere in between.  I didn't buy any furniture, but I did get some great little items that will be fun and helpful.  I love that about Ikea.  And I love that everything there is truly so cheap.  Thanks, Ikea, for fitting into my non-existent budget.  That's real cool of you.  Real cool.


I got a number of awesome things at Ikea, but the thing I am most proud of is this super sweet laminated cotton.  What you see here is about 3/4 of a yard.  And guess how much it cost me?  A whopping 37 cents.

(Insert time for you to be insanely jealous.  ...  Recovered yet?  A little bit at least?  Okay, moving on then.)

It's actually two pieces of fabric.  They were the display pieces with the tags in them.  They were on a really good sale, but I couldn't find the roll of fabric anywhere, so I asked the saleslady if I could just buy the display pieces.  She said yes and then only charged me for 1/4 of a yard since they were just random leftover pieces.  So 1/4 of a yard on an insanely good sale price.  Add that to the 43 cent coupon Holly gave me and it ended up only costing me 37 cents.  A week later and I'm still giddy about it.

After our big shopping trip Kendra talked us into going back in for some of that yummy chocolate cake.  Uhh, or maybe she didn't talk us into it so much as she just said "chocolate cake" and we said "YES!"  After our super mega delicious chocolate cake (which someone else treated us to who wasn't me... or Holly), that someone else wanted to go back and look at some pillows that were calling her name.  It was while she was looking at pillows that I scored me some 37 cent fabric.  She didn't end up getting the pillows (and it's a good thing too because there was no way they would have fit in her suitcase), but it was definitely worth the trip back into the heart of Ikea just so I could snag my laminated cotton.  Okay I'll stop talking about it now.


When we got home from Ikea we enjoyed some yummy black bean burgers and then settled in for a game of Monopoly.  It was kind of a short game.  Despite Holly and me trying to blatantly gang up on Kendra, well, she crushed us.  She crushed us good.

Sunday morning we snapped a couple pictures* and then took Holly to the airport so she could fly home and be reunited with her husband and children.  We were sad to see her go, but I think my brother and his kids wanted their wife/mom back.  Boo hoo to us to have to send Holly back home.  She's so fun to have around.  After our little jaunt to the airport we went to church.  And then we did other stuff.  I don't remember what.

*I don't know why, but my face looks like I got a really awkward sunburn in all of the pictures from this weekend.  Boo to that.  Especially since I definitely wasn't getting any sun. 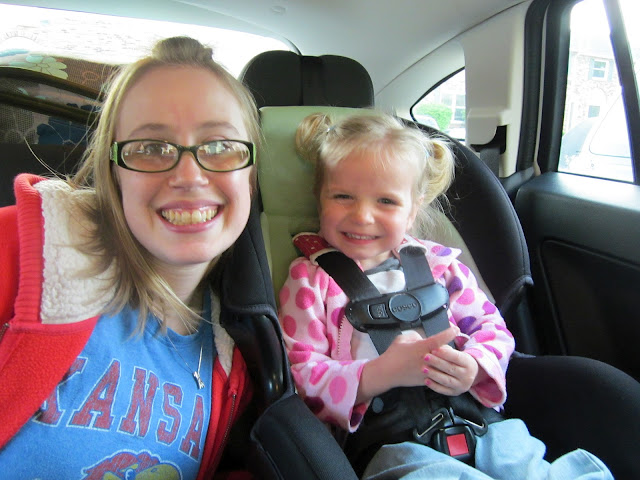 On Monday I taught Kendra how to make whole wheat bread (at her request), we played a lot of games of Farkle, went grocery shopping, went to lunch at Panera (yummm), and Kendra made some major auntie points by buying Cars fruit snacks for Olivia. 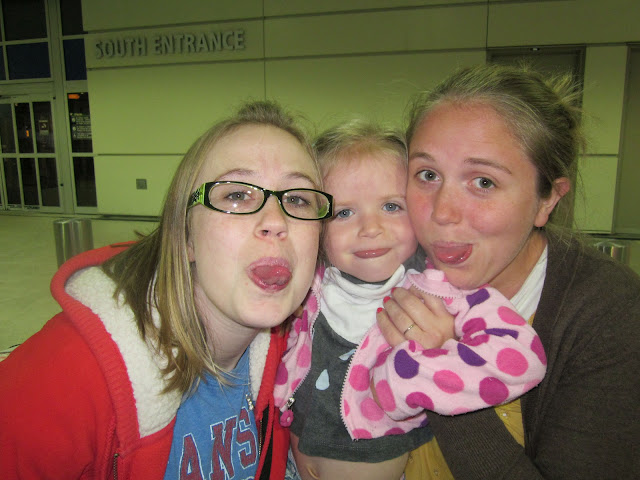 That evening we drove Kendra to the airport and said goodbye.  After shooting some really flattering pictures of us girls.  Despite being a little wary of Kendra and Holly when they first arrived, Olivia was so in love with them by the time they left.  We were sad to see Kendra go, but her family missed her too. 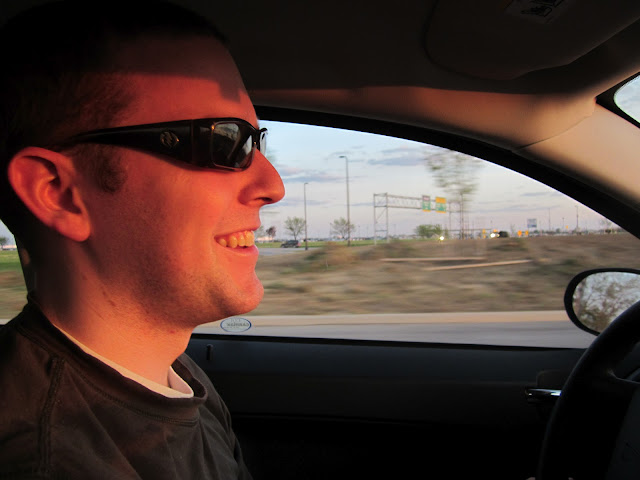 And then Bryan got to come out of hiding and rejoin the regular activities of our home again!  :)

Okay, Bryan was never told to go into hiding, but he was busy studying a lot and I think--truth be told--he really preferred to hang out in the basement when we girls were busy painting our nails and stuff.  I don't really blame him.  We may have been a little uncontrollably giggly at times.

Anyway, I'm sure I forgot to mention half of what we did last weekend, but I haven't forgotten how much fun it was!  Thanks so much for coming girls!  Love you!

Awww...sounds so fun! Reminds me all over again why I have always wished I had a sister. So glad you all got together!!!

It was so fun. I am already looking forward to next year. And thank you for sparing the world of the dance video. Miss you tons!

I love this post! So happy and so fun! And it makes me want to visit you REAL BAD! I'm pretty sure I will need to remedy that sometime in the near future. :)

So jealous of your laminated cotton. They had some really cute checked (pink, yellow, and green) but it was all $8 a yard. Way to expensive, especially since I couldn't figure out what to make with it, so I couldn't justify buying it.
I can't wait to see what you make!