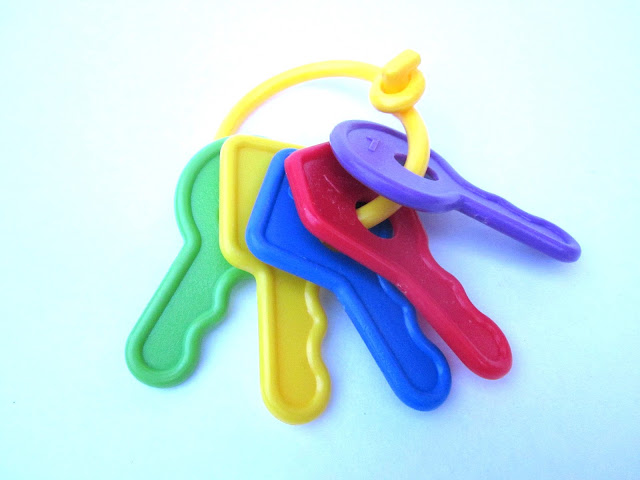 Last night I went to bed feeling fine except for a slightly scratchy throat that came out of nowhere.  This morning when I got up I just felt... blah.  I got dressed in normal clothes only to turn around and put on some comfy drawstring pants about a half hour later.  My throat was scratchy, my head just didn't feel right inside, and my body was kind of shaky and weak all over.  And I felt nauseous.  Blah.  I felt like such a sissy, but this blah sickness that came out of nowhere totally knocked me over the head.

Luckily Olivia was perfectly happy to hang out and watch Curious George for a really long time while I laid on the couch and tried not to feel like I might throw up.  Finally she was begging for breakfast so I pulled myself up off the couch and got her set up with a bowl of cereal.  And after that I finally had the good sense to drink a can of Sprite, which turned out to have magical properties and healed me to some degree.

A morning of preschool and music class later, I'm feeling a lot more manageable.  And I feel a little silly for feeling so miserable and destitute this morning.  But, man, some days are just like that, aren't they?

The tragedy of my sudden blah sickness this morning was compounded by the fact that I kept having flashbacks of how I felt in January after I miscarried.  The whole time before and after the surgery I just felt so... blah.  There didn't seem to be anything outwardly wrong with me.  I didn't have some big gaping wound or even a big purple bruise to compensate for all my discomfort.  Instead I just laid on the couch all month feeling sick and kind of dumb about the whole thing.

Because it's one thing to be on the couch sick with the flu and throwing up all day.  People can see that you must feel like trash.  But when all you have to say for yourself is, "Man, I feel so tired and I feel like I might throw up, but I probably won't, and I just don't know how I'm going to make it through the day," well, what's anyone supposed to say to that?  "Hey, sissy, get over it."  That would probably be an appropriate response.

My blah sickness this morning makes me wonder if maybe I really am just a lot more of a sissy than everyone else.  I've known people in my life who have an incredible capacity to get through illnesses and other problems far worse than my own (and with far fewer complaints).  I never want to be one of those people who whines about everything just to get attention.  I imagine myself as this strong woman.  But then I get a little case of blah sickness and it totally throws me for a loop.

Anyway, there's really no point to this post except to say this:


Wishing you all a blah-free day.  But if this is contagious and you catch it through my blog, I hope you all have access to a can of Sprite with magical healing powers like the one I had this morning.

Sounds like how I felt this morning... except my sore throat turned coughing fit... turning into gagging and throwing up (weak stomach right now, I'm 30 weeks pregnant). And I still had to come to work to teach. YIKES! Maybe you caught my blah-ness through your blog. I hope you and I both get better soon!

Anna would totally tell you that you are a big ole' sissy pants.

Also, even though Calvin slept like a champ last night, I didn't. I kept freaking out that something was wrong with him because he WASN'T CRYING! Too bad I didn't go to bed at 8 also. So, my blahs are sleep related, not sick related. Although we did go on a nice long walk. Now it's time for a nap!

So glad you're feeling better. :)

You're not a sissy. Everyone is totally allowed blah days sometimes (which, by the way, definitely require comfy pants).

I'm glad you had a magic Sprite and I love you a whole lot.

And I hope you are pregnant again soon too. And not feeling blah. :)

You are a big ole sissypants.

Also, it's good that you and I didn't talk earlier yesterday because I was also having a blah day and we probably would have depressed each other further. :) Also, you remember those bows you gave Soapy and Jojo for Christmas? One bow in particular is now Soapy's favorite thing to wear and she wouldn't take it off yesterday, even for her nap.

Love you! How are you feeling today?