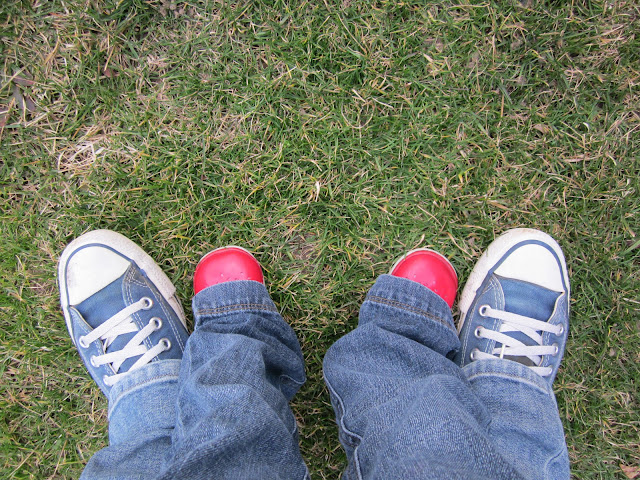 I haven't been down in the basement much lately.  Except to start several loads of laundry (I swear the clothes are having babies and making more clothes, but I still can't find anything to wear!) and then go retrieve the wet laundry to hang it up outside, I've really only been downstairs for the occasional morning of preschool with Olivia and her friends.  My sewing machine is becoming a stranger to me.  And that makes me feel sad in a way I can't really explain.  Because when your sewing machine starts becoming a stranger that makes it both scary and intimidating to start becoming friends again.  Even when you were BFF before.

I've been spending my time elsewhere for several reasons.  The weather has been nice (although HOT) lately and we've been spending most of our days outside.  Olivia's naps have been hit or miss and so even on the days when she takes nice long naps, I don't anticipate it and so I end up playing spider solitaire and checking e-mail and wondering what I might eat for a snack instead of getting anything done.  And I also haven't been feeling great lately.  First there was a thing with my shoulder blade and it felt like I had a rib out of place.  Thank goodness for the chiropractor.  I have got to convince Olivia to grow up and become a chiropractor... and then never move out.  And then once my back finally stopped hurting so much and feeling so stiff I started feeling sick.  Now I'm mostly fine except for this flash flood that keeps occurring in my nose.  Boo.  And with all of that going on, my sewing machine has been hiding away on its table, looking pretty and feeling left out.

Last night I made a to-do list for myself of things I need/want to do today.  I thought about writing down a specific project I wanted to start and finish sewing today, but instead I just wrote, "make something."  I think sometimes I put too much pressure on myself to make a beautiful finished prototype of a project for the book without making any mistakes... on the first try.  Which is ridiculous.

So many of the things I've made for the book have come out all wonky on the first try and I've had to tweak things here or there to make them just right.  So many of the projects have turned out not at all like I imagined and I'm still taking a break from making the "good" version because I'm overwhelmed by it.  Last night Bryan was working on the computer downstairs and I went down to talk with him.  As I sat on the stairs and looked at my sewing area I thought, "I wish I just had patterns for all these things I'm trying to make."  And then of course I laughed inwardly at the thought because, after all, that's why I'm writing the book!  Because I'm making up the patterns!

I've also felt lonely being away from my blog so much lately.  In my heart I am a writer and it never feels quite right to be me and not be writing.  But sometimes I don't write because I don't want to bore you all with how I haven't really been doing anything lately.  And sometimes I don't write because I have real projects that I want to share, but I haven't had time to do all the behind-the-scenes work to get them completely ready.  And then, even worse, sometimes I don't write because I have a project that is completely ready to share, but then something backfires and I realize I don't have anything nice to say about it anymore.  That always makes me sad.  And that kind of happened this morning.  The project is still great and I still have every intention to share it, but it was a hard morning and that project was involved and now it just doesn't seem as exciting as it did yesterday.

But I've been missing these parts of myself and my life for too long lately.  This week I want to work on my book more.  I want to get back into sharing things with all of you.  And I want to make up with my sewing machine.  I think I'll give it some fabric.  It usually likes that.
Posted by Katie Lewis at 12:30 PM

My sewing machine and I just renewed our friendship yesterday. It was a rocky start...not sure if the machine would forgive me for all the neglect. She showed her dissatisfaction with me by hiding her power cord...but decided to make up and let me find it.

Sewing machines forgive quickly and completely. They're completely happy to just hum along...have fun! And by the way, having your kids grow up and stick around didn't work out so well for me. :) Just sayin'...I miss YOU and I'm looking forward to more posts.

Same down at this end of the street. I just haven't had anything in my head dying to be made... Yesterday I even went downstairs to sew something, make some bows, or something. But ended up just staring at my forlorn sewing machine, fiddling with some ribbon, and going back upstairs. Sigh. But tomorrow's a new day and I have some new ideas, one of which involves borrowing your book again, pretty please?

I actually did a bunch of hand sewing the other night. Just little things that needed mending. A pillow with a hole in a seam, a patch for Arora's pants. It felt good to have them done. I need to hem some curtains in the kids room and make the curtains for my room, but those projects are boring and so never get done.