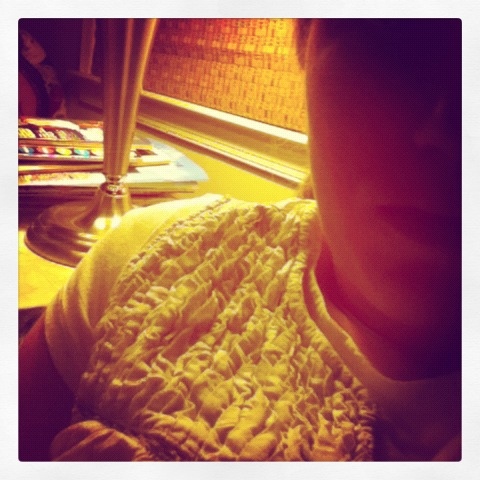 As it turns out, we didn't need a contingency plan for whether or not we would tell anybody right away.  Because, for what feels like the umpteenth month in a row, I'm not pregnant after all.  It may seem odd, I guess, that I'm perfectly willing to write about not being pregnant when I basically just said that we weren't going to make some big announcement if I was, but it's two different things.

If I were pregnant, it would be a matter of joy.  And joy is like trying to keep a secret that you just want to tell everybody.  But joy and pain work differently.  Pain is not a happy secret; it's a pile that you just keep having to shovel away at, little by little, until it's not making a mess on your front porch anymore.  And when you can count on something adding to that pile each and every month like clockwork, well, at some point you've got to start digging.

To be fair, I've thought I was pregnant almost every single month since I miscarried.  But this month I had a legitimate reason for thinking so.  When I was out on a walk with a good friend of mine about a month ago, she suggested tracking my basal body temperature.  I had heard about it before and knew it was legit and not just some old wives tale, but I didn't really know anything about it.  She had used this method herself in trying to get pregnant (and succeeded), so she explained it very simply.

*Since that conversation my friend showed me this article which explains that you're actually ovulating just before the spike.  Just FYI, I guess.

It sounded simple enough, so I bought a thermometer (we had one, but it was weird) and started tracking my temperature the day after the end of my last period.  To make a long-and-lots-of-numbers-story short, my temperature was low at first, spiked high, and then stayed high.  So all signs pointed to me finally being pregnant.  I tried not to get my hopes up too high, of course, but how can you help it?  I finally had evidence to back the feeling I've had (every month so far) that I am indeed pregnant and we were finally going to get to have our turn to have another baby and get to move on to the next phase in life.

Bryan and I had already decided that I'd take the pregnancy test today, so I did.  But even before I took the test my hopes had significantly dropped.  I took my temperature before getting out of bed to take the test this morning and, much to my despair, my temperature had dropped.  Like a birthday balloon popping in thin air.  It had been so consistently high since the spike and then, on the day that it was finally time to test it out, everything had been shattered with those tiny little numbers on the thermometer.  The excitement was gone.  The inevitable dread had set in.  But, daring to hope and wanting to make it not be true, I took the pregnancy test anyway.

Of course it came up negative.  Not that I was surprised anymore, but somehow this month, with all its cold hard evidence to support my deepest hopes, the negative news cut sharper and went deeper than it had before.  In one great resurgence all of my disparities and quandaries about never having anymore children and just sitting at home by myself when Olivia starts school came rushing back in.  At two in the morning in bed, with Bryan asleep in bed next to me and Olivia asleep in the pack-n-play at my feet, I felt, in some ways, just as alone as I did on the day I found out that, despite a positive pregnancy test and all the hormonal changes that go with pregnancy, there was really no baby after all.  Not for the first time, and not for the second time, and not for the fifth time, I had been blighted.  Nothing left to hope and dream on.  Nothing there.

There is a quiet, broken part of me that wants to put away this nonsense of trying to have more children and never bring it out again.  At least if I didn't try I would be spared the devastation of a lost hope, month after month.  And this month, when I was most hopeful, the bad news came right in the middle of what was supposed to be a very happy vacation.  It feels like a mean joke, though I know Heavenly Father isn't like that.

And then there is this perpetually (annoyingly) cheerful part of me that always thinks, "Surly next month I'll really be pregnant.  This not-being-pregnant can't go on forever."  But I don't feel very cheerful and hopeful about it right now.

Except that there is a little someone who has been hanging around in the back of my mind for months now.  Ever since Bryan and I felt it was time to try and have another child, there has been a certain little someone who lingers there in my mind like a presence of hope.  They call me Mommy and they tell me I'm not done being pregnant and having children yet.  And, in spite of my not being pregnant, they never go away.  And there they sit still, even now, just as ready as ever to come and finally be here and make me feel more whole than I do now.

It is for that little someone--or someones--that I feel so lonely for.  And it is for them that I'll keep trying.  For them that I'll go through another month of trying to prep myself for the idea of having to go through pregnancy and hopefully not have it be so miserable this next time.  For them that I'll block out the whole ordeal of knowing I'll have another C-section.  For them that next month and for as many months as it takes after, I'll be tracking those stupid little numbers and taking those awful little tests until someday, someday, it all turns out to be true.  Someday that test will say positive.  And someday I'll go to the ultrasound and there really will be a healthy, growing baby inside.  Today, sadly, is not that day.  Today is a pile and shovel day.  But that day, well, that day will be a day of secret joy.

Katie, I am so sorry you are going through this right now. It took us 8 months of trying to get Jack, and each month was torture. I found that tracking my temperature helped, but what actually got us pregnant was tracking my cervical mucus as well. I waited a few months before doing it because its gross, but honestly, it gives a much more accurate picture. I checked this book out from the library and it was so clear and helpful--I fully recommend it: http://www.amazon.com/Taking-Charge-Fertility-Anniversary-Edition/dp/0060881909/ref=sr_1_1?s=books&ie=UTF8&qid=1340891671&sr=1-1&keywords=natural+family+planning. There are charts in there for you to use and it explains everything really clearly. I hope your prayers get answered soon!

You're amazing and strong! I love how you write about what your truely feeling. Question, how do you know you will have to have another c-section? They told me that I had a good shot at having the next baby the non-c- section way assuming the next Baby isn't breech too.

I put the wrong you're but my phone won't let go back and edit my post.

Awwww, my heart hurts for you! :( I hope you get the little one you desire soon!

Trust in the Lord's timing. He knows you and your families needs.

Katie: I feel you pain. Last year we got pregnant only to miscarry a few weeks later. Then it took 6 months to get pregnant again. I felt horrible everytime those dumb tests said negative. So hang in there and don't quite trying! Also, don't dispair about the c-section, I had a very successful v-bac after my first. So give it a try!

Katie- I know what it feels like to go month after month without being pregnant. It took us a full year to get pregnant with Aaron (our four-year-old), and I spent many months tracking my temperature on a little chart. You and Brian will be in my prayers. I think one of the hardest parts is feeling like you've received confirmation from the Spirit to go, and then...nothing.
P.S. This post was beautifully written and I'm sure will comfort and uplift many who are going (or have gone) through similar things.

What a poignant and personal story you've shared. Your heart is broken, again. What a difficult time for your family. My heart goes out to you.

I knew I had to be pregnant with YOU because you were hanging around like that, too. We'd be on an outing and I'd count kids to make sure I had everyone, but I kept counting to 5 even though I only had 4 kids at the time. I love you so much. Mom

Oh my Katie. I am so, so sorry. I know how much you hurt. I feel your exact pain in my heart as you do in yours. And for once I am a teeny tiny bit grateful for all that Richard and I have gone throu, so that I can feel how you feel. I know exactly how you feel about thinking you're pregnant each month. I still feel that even though I know it's not possible. Ad I know exactly what you feel about wanting to just give up. Sometimes it really does seem like the easier thing to do to think that we won't have any children and that we should get on with our lives. And sometimes I really do have to think about that possibility, since it is a reality. But don't give up. I sure love you. Your babies will come. Some blessings come soon, some come late, and some don't come until heaven. But for those who follow the gospel of Jesus Christ, they come. Thank you Elder Holland for those beautiful words. I love you Katie!

Hi! It's me again! I want to say that I also track my basal temperature and my cervical mucus! Actually I track the BT to avoid pregnancy when I need it and the mucus when trying to conceive! Also, I would like to share 2 information about people who got difficulties getting pregnant for the second time, like you, but then finally succeeded! Sometimes what works best is to give a 3-4 day period of abstinence and not to try everyday! (keeping tracking your mucus, usually 2-3 days before your BT spike) is a really good time to try to get pregnant!. And the other information, is that I knew a couple and she was really tryiing to conceive but at the same time she was stressed about somethings. Well, when the couple had to travel to New Orleans they had such a great time, eating oysters, playing in the cassino, well, shortly after, they got pregnant! So sometimes it's a matter of enjoying the process or not to think in the process at all! Just try to relax (i really know it must be difficult!) But go on a trip alone with your husband in your probably fertile period and really enjoy it!