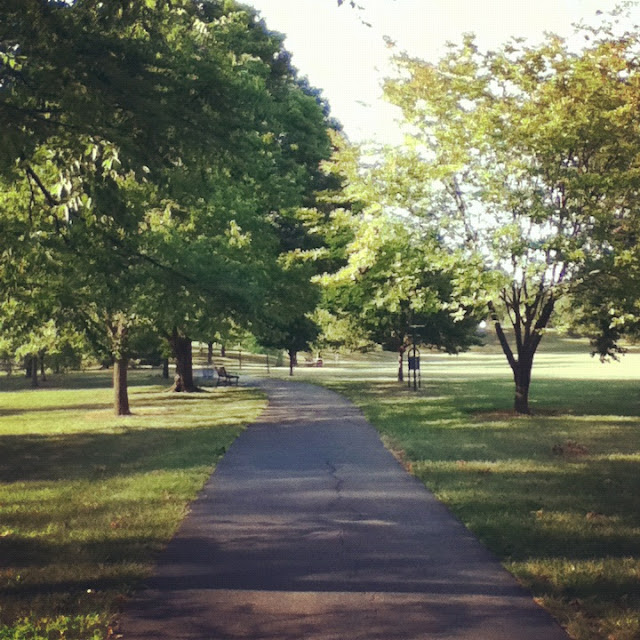 I've been thinking a lot lately about how Heavenly Father communicates with me.  When it comes to having more children join our family and what that means for my body, I've had a number of distinct impressions, and some of them seem downright contradictory.  The other evening after a particularly hard, emotional day, I skipped dinner and left Bryan and Olivia downstairs while I went up to our room to take a nap.  It was a nap I really needed--both physically and emotionally--but, before I fell asleep, I laid there in bed with my arms folded in prayer almost as much as in defiance as I prayed my ranting prayer to Heavenly Father, listing off the myriad of things that were wrong and unfair and demanding an answer of him to all of my questions right then and there.

Of course, no answers came.  I think the whole scene would be something akin to an angry teenager storming in to a parent and yelling at them about any number of perceived injustices, demanding answers, and then breaking down right then and there.  And, like any wise parent, Heavenly Father didn't reprimand me in the middle of my acutest pain.  He stood there, silent sentinel over me while I broke down.  Not answering questions, but not about to let any more harm get in my way that day either.

I think all too often we feel offended by a silent answer.  But sometimes, though we often recognize it much later, a silent answer is so much more what we need than words or feelings or promises.

Sometimes Heavenly Father communicates that way.  Through silence.  And yet, other times he communicates in a way that is so straightforward that it almost gives you tingles down your spine.  Most answers and comfort come in tiny little pieces that make sense all together later, but don't seem all that complete at the time.  But then, every now and then, Heavenly Father whispers to us or puts a distinct impression in our mind, we do it, and we immediately reap the benefits and understand the meaning.

This happened to me a couple of days ago.  I'm in the middle of reading a book, so usually when I go to the bathroom, I sneak my book in with me for a few quiet minutes of reading all by myself.  But this time I didn't take my book in with me.  And on those times I don't bring my book in, I usually flip through Popular Science or Martha Stewart Living or another magazine that has lots of little blippets that I can read through quickly in the 2.5 seconds it actually takes me to go to the bathroom.

But this time, when I sat down and considered my choices, I felt distinctly impressed to open up the Ensign (a magazine published by our church, The Church of Jesus Christ of Latter-day Saints).  Just to open it up and the article I was supposed to read would be right there.  Usually the Ensign isn't my first choice because the content is a lot deeper and the articles are longer than in the other magazines, but the impression I had was so distinct that I searched through the magazines until I found the current Ensign.  I opened it up and knew at once that what I had felt impressed about was exactly what had just happened.  I opened up right to the article entitled, "Waiting On The Lord."


Ha.  Think Heavenly Father knows what's been on my mind a little bit lately?  I read the article (which wasn't long, by the way) and came away feeling a renewed sense of peace and acceptance regarding all of the feelings and confusion and sadness I've had lately.  And I think that the author, Christy Nielson, shared some insight about waiting that was exactly what I needed to hear.  Especially the idea of thinking of waiting not as waiting for a plane to arrive, but to think of it like a waiter waits on tables--to serve people.  Understood in that way, waiting is filled with purpose instead of punishment and the unbearableness of the task melts away.

It was definitely the message I needed right then and finding it there was definitely a gift from my Heavenly Father.  He communicates with us in so many different ways, each appropriate for the time and situation.  And there are times I feel like I talk and talk at Heavenly Father and then never quite seem to know how to listen in return.  But you know what?  I think Heavenly Father knows that about me.  And I think he knows how to get the message through anyway.
Posted by Katie Lewis at 5:06 PM

Thank you for these thoughts and the article link. I like where she said, "The same amount of time will pass whether I am squandering it in anger and impatience or using it to serve the Lord and His children." I've been pondering our upcoming week of service to the church youth on the handcart trek, and just this morning I wrote in my journal, "Can I truly be Christlike in all I do an say? Be kind and patient and eliminate snarkiness, irritation, judgment, impatience? continue to serve willingly even when I am too hot and too tired?" The article's perspective on "waiting on the Lord" was just what I needed to hear. Thank you.