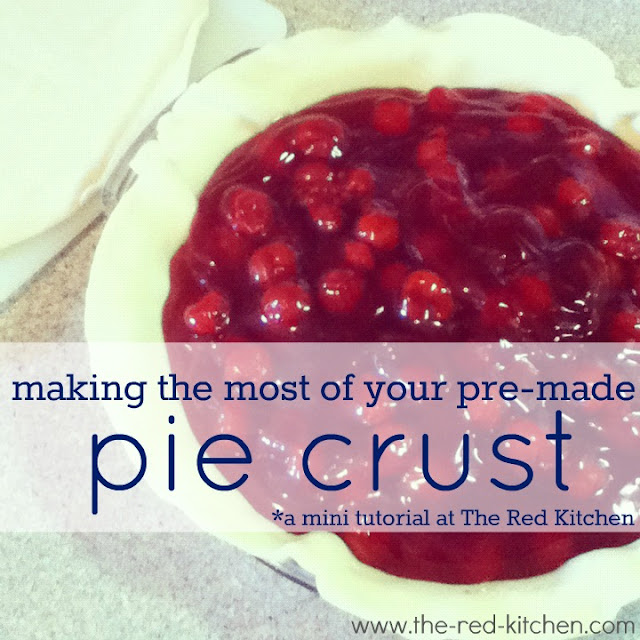 Last night some of our good friends invited us over for a good old fashioned 4th of July barbecue this evening.  Mmm-mm!  My friend told me what was on the menu and I asked if there was anything I could bring.  She said anything was fine, so when we went to the grocery store yesterday we settled on chips (I know, so original and gourmet) and cherry pie.

I like to think that I make a pretty mean pie crust, but with the temperature in the 90's, the thought of slaving over pie crust just didn't appeal to me.  So instead we picked up some pre-made pie crust at the grocery store.  Did you know they sell that?  I honestly had no idea pre-made pie crust even existed until my sister asked me to pick some up for her a few years ago.

Now, admittedly, pre-made pie crust is okay, but it's definitely lacking that special something.  Maybe that something is just an excess of butter, but I'd like to think it has something to do with the labor of love that goes into making a huge mess with flour on the kitchen counter.  But just because your kitchen isn't covered in flour doesn't mean you can inject a little love into that pie.

Here's what I did with ours... 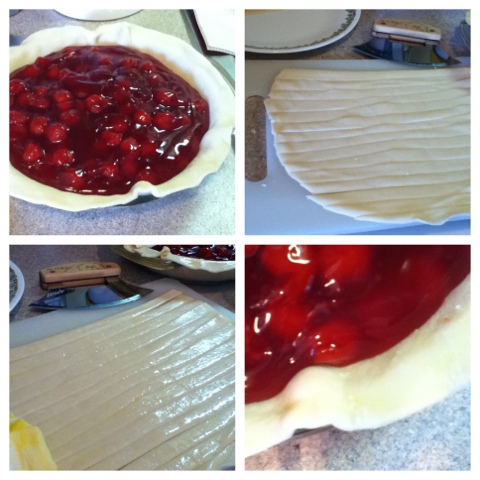 1. Buy pie crusts (they come in a pack of 2) and pie filling.  We went for cherry pie, so I bought 2 cans of cherry pie filling.  One can just isn't enough.  Unroll one pie crust and lay it out in the pie pan.  Top with both cans of pie filling.

2. Unroll the second pie crust and use a pizza cutter or knife to cut it into 1/2" wide strips.

3. Make an egg wash (see below) and spread it over the top of the cut pie crust.

4. Brush egg wash onto the edges of the filled pie crust. 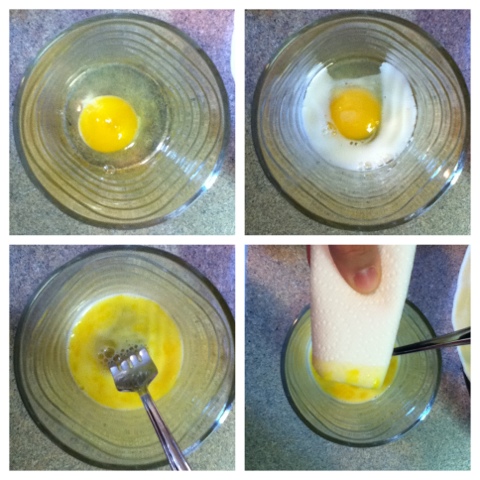 6. Add a little milk. (I've skipped this step before and I don't know that it makes a lot of difference, but adding the milk makes the egg wash go a little farther so you don't have to use more eggs.)

7. Whisk egg and milk together.

8. Use a pastry brush (or rolled up paper towel) to brush your egg wash onto the crust. 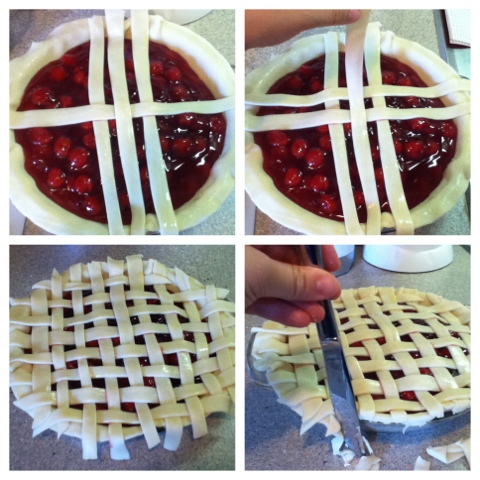 9. Starting at the middle, lie the strips across the pie.

10. To crisscross the strips into a lattice pattern, simple lift the strips up as you come to them and then lay them back down once the new strip is underneath.  It's really not as tricky as it looks.

11. Finish weaving the pie crust in and out until you're satisfied.

12. Trim away the excess pie crust by holding a knife (a butter knife will do just fine) straight up and down and sawing it up and down right next to the side of the pie pan.

Seal it up & bake it 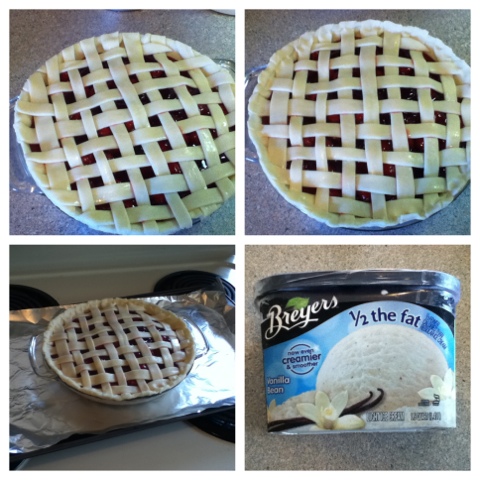 13. Your pie will now be nicely trimmed.

14. Use a fork or your fingers to gently press the edges of the crusts together.

15. With 2 cans of filling inside, the pie is bound to overflow and make a mess in the oven.  So line a baking sheet with foil and place the pie on top.  At this point it would also be wise to cover just the edges of the crust with some tin foil.  I should have done this, but I totally forgot.  The edges of my pie ended up... uhh... a little brown.  :)

16. Top with ice cream.  A nice scoop of ice cream is bound to hide any flaws.  And, ya know, it tastes pretty good too. 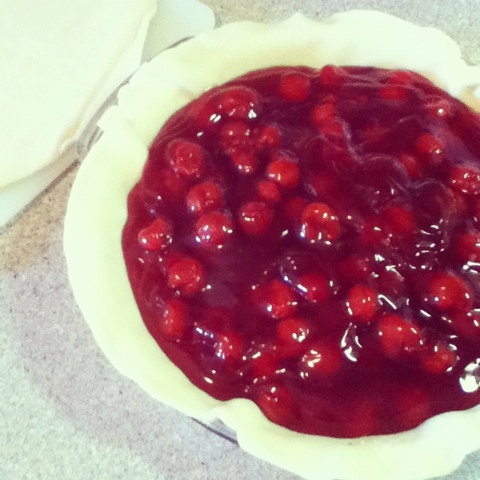 Anyway, it's just about dinner time here, so I'd better sign off.  Happy 4th of July all you fellow Americans!  And a happy Wednesday to all of my international friends.  :)

But most of all, happy pie! 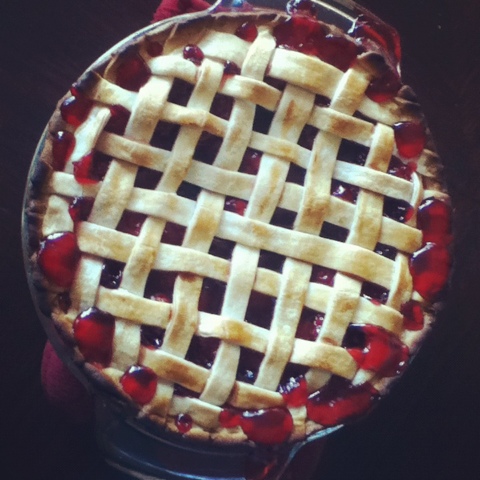 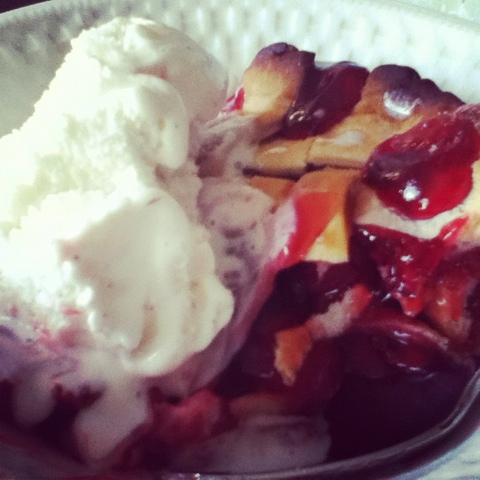 For those of you who were curious how the finished, fully-baked pie turned out, here it is in all its glory, complete with ice cream on the side.  It was super yummy.  And one of our friends asked if it was all from scratch.  I'll take it!  :)

Yum! Nice work with the egg wash and lattice top. Hahaha - I take all the blame for not teaching you that stores actually sell pre-made pie crust. :)