Oh no! It's already out there! (Thoughts on seeing your ideas elsewhere) 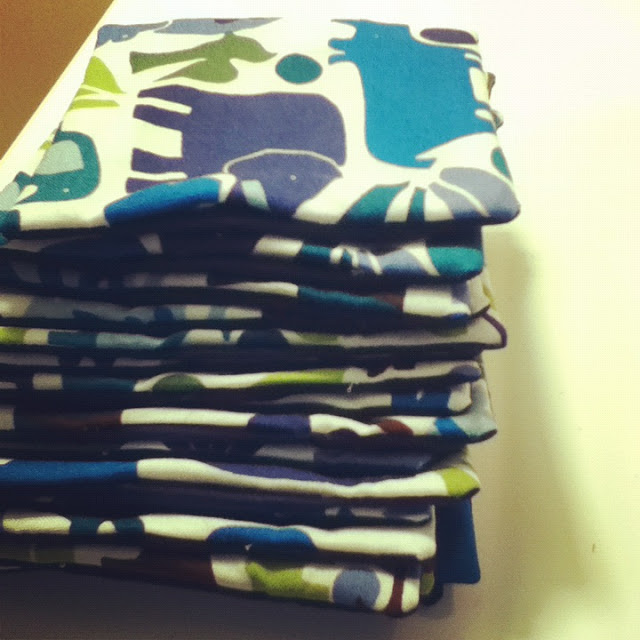 For the past few months I have thought a lot about ideas and whether or not the ideas I have are "mine."  After all, I do a ton of reading about sewing every single day and in the midst of all that of course I learn a lot of new things and find myself inspired by others' designs.  We all do that.  And we should!  I so appreciate and enjoy learning from others.

And then there are the non-sewing-community sewing ideas I get.  Just yesterday I was compelled to sew up this this little stack of beanbags for a preschool activity swap I'm participating in with some of my local friends.  The idea to sew the beanbags was about as un-original as ideas come.  The instructions for the activity and how to assemble it came all together on a piece of paper that my friend handed to me.  Do this, do that, put it in the bag, make sure the label is put on exactly such and such a way.  This was about as far from a moment of epiphany as you could possibly get.

The funny thing is, the instructions for assembling the activity were all there except for one thing: how to sew the beanbags.  They gave me a seam allowance, but no dimensions or (useful) sewing instructions.  This didn't bother me since, ya know, I'm perfectly capable of sewing beanbags of all things, but it did strike me as a little ironic.  Here I was thinking to myself what an easy and un-original project this was, and yet I was having to make it up entirely by myself.  (Well, the beanbag construction anyway.)

To be completely honest, I was relieved that there were no specific instructions because then I could do it my way.  And my way is easy.  And doesn't require hand stitching the little openings shut.  My way rocks.  (Am I allowed to say that?)  I don't remember whether beanbags were on my original list of project ideas to include in my book, but after sewing up 20 of them yesterday and getting the process down to an art, well, let's just say the project is written and on the to-definitely-include list for the book.

And, of course, once I had the project instructions all written down and my "where to put the pins" drawings* all doodled out, I found myself wondering how I ever thought my book could possibly be complete without beanbags.  After all, they really are such a wonderful beginner project--so simple and accessible to inexperienced sewers and so versatile and fun once they're finished.  In fact, when I was learning to sew (as a child) I made quite a few beanbags for exactly those reasons.  I knew they would always turn out.  And isn't that the kind of project we all love?  (The ones that will always turn out, I mean.)

I actually came across a couple of the beanbags I made as a kid when I was sorting through all of my boxes of pre-college things.  Those beanbags are wonky and made from weird fabric and have things like "Hi" stitched onto the front in lopsided lettering.  But you know what?  I still love them just as much now as I did when they were hot off the sewing machine.

So, beanbags.  They're well on their way to being included in the book.  Even though... (dun dun dun) they're anything but a new idea.

Actually, I'd say about half of the projects I'm developing for my book are old ideas and half are new ideas.  Maybe less than half are new ideas.  All of the projects are classic and versatile, so it's really hard to say that any of them are brand-spanking "new."  My entire focus for the book is to share projects that, like the beanbags, are fully functional, as fail-proof** as possible, feature classic, timeless design, and are simple enough to sew that beginners won't feel intimidated, but versatile enough that more experienced sewers will enjoy making their projects truly their own.  Maybe that's a tall order, but the truth is, that description is exactly what I'm after.  These are projects I'm excited to share.  They're so simple, but so well made.  Totally my style.

But, as it turns out, a lot of other people make simple projects too.  And some people even make them in ways that are really similar to the ways I've already thought of.  And some people (gasp!) even think of better ways to make these things.  I admit that it makes me nervous every time I see one of these projects pop up.  "Oh no! It's already out there!"  I feel like a failure, like I'm too late on the scene and my project and its carefully-written instructions are now obsolete and why did I ever want to write a book anyway?

I think we all have moments like that sometimes.  We see something that we thought was "our idea" with somebody else's fingerprints and style all over it and we feel scandalized.  It's hard.  But you know what?  I've decided (and I like to think that I'm right) that seeing a project out there that's similar to our own is not a bad thing.  In fact, I think it's just the opposite.

I remember one of my good friends saying to me a while back that she had been talking to her mom or grandma or somebody and when she mentioned to them that she was making t-shirts for her kids from old adult-size t-shirts and kid pants from adult-size pants, the mom or grandma responded, "Oh!  I used to do that too!"  My friend laughed when she told me that she had realized, "Oh.  We young people thought we were cool for coming up with these 'new' ideas, but people have been doing this for a long, long time."  She didn't mean that she had suddenly lost interest in making clothes for her kids by recycling adult clothes--I think she was just as enthusiastic about it as ever--she just meant that she understood now that most ideas (especially when it comes to sewing which is such a time-honored craft) aren't new; they're rediscovered.

I think about this a lot and I find myself agreeing with my friend on her theory of rediscovery in ideas more and more.  Especially when I see projects pop up that are so like the ones I'm quietly working on over here. Yes, I often still feel panicky when I see a tutorial for something that I thought was "mine," but I'm getting better at taking a step back and laughing at myself a little as I realize that these ideas aren't new, just re-discovered.  And the fact that so many people are interested in these kinds of classic projects just makes me feel all the more confident about my focus and direction for this book.  These are projects that people will always enjoy.  Now isn't that a nice thought?

I also want to add, as a final bit of encouragement, that just because you see a project out there that looks just like something you've been working on doesn't mean that it is the same thing.  When it comes to creativity, the process definitely matters.  And it's very likely that your process is either entirely different or at least a little bit different from the look-alike.  But who's to say your process isn't just as good?  Or better?  Just because someone has already said something in their own voice doesn't make you saying it in your own voice obsolete.  This is a big world with a lot of ideas and I think it's so much better for all of us when we add our voice to the conversation, to the pool of ideas.  This is how we all learn and grow and develop our talents.

I don't think you have to be an expert to have good ideas.  I think you just have to have a working mind.  And if you're the kind of person who thinks about how to make things and how to make those things even better, then I'm pretty sure you've already got that whole "working mind" thing going for you.


*Bryan has been testing out several of the projects for my book and these diagrams have been one of his main requests/suggestions.  :)


**I hate to say "fail-proof" because I just know someone is going to remember that I said fail-proof, try a project from the book, and then not have it turn out exactly the way they wanted and be upset with me.  So let me just say that I don't mean "these projects will turn out perfectly on your first try if you have no sewing experience."  I mean, "I think you'll finish the project feeling satisfied and happy with your work and that it will still be fully functional, even if you discover techniques you need to practice the next time around."
Posted by Katie Lewis at 11:12 PM

Gotta love beanbags. And I agree with you about the projects that are timeless and simple. Thank you for sharing your thoughts!