Plans (and the lack thereof) 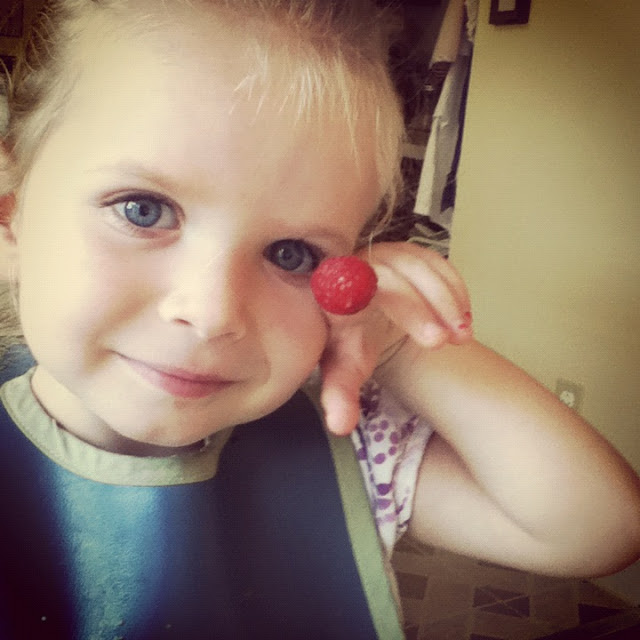 Hey guys, did you notice that it's almost August?  Because I noticed that.  One more day of July and then--poof!--August.  Around here, August means Bryan starts school again (and then doesn't get more than a week or two off at a time until he graduates... in 3 years).  August means hopefully it won't be so dang hot outside all the time.  (It's already starting to cool down and I couldn't be more grateful.  Some change is good, yo.)  August also means we find out whether or not Olivia will be starting preschool this year.

We've enrolled her in the local Head Start program which I have heard nothing but awesome good things about, but we won't know whether or not she'll get to go until the end of August.  It's free preschool (although this one in particular seems to be pretty amazing), so it just depends on whether or not there are kids out there who are more eligible than Olivia.  If there are, I'm happy to have them take her spot.  But if she gets in, well, that would be jawsome.

We knew that we would be playing the last-minute waiting game when we signed her up and there's really nothing I can do about it.  Some things are like that.  We all have examples.  I used to want control over situations like this.  I used to want information, finality, answers.  I'm not a very patient person, but when it comes to waiting on things you have no control over, I think I've gotten just a smidgen better about dealing with it over the years.  As August creeps closer and closer, I haven't been worrying about whether or not she'll get in, I've just been wondering a lot about it.

If she does get in, I think she will have the time of her life there.  She's already so excited for school (kindergarten when she's five) that it just spills out of her every single day.  One day when we were driving to the grocery store I mentioned off-hand that the school we were passing was the elementary school that she'll go to when she's five.  Now, every single time we pass that school she says,

Anyway, so obviously this whole preschool or not thing has been on my mind kind of a lot lately.  I admit that I'd be sad to have her gone so much.  (It would be a couple hours a day for a few days a week.)  But I also admit that I can't help but daydream about what I'd do with all that extra alone time.  Work on my book?  Sew?  Clean our house?  Run errands?  Eat pie?  Perhaps all of the above?  It's kind of dreamy.  Kind of too dreamy.  I get a little carried away thinking about all the ways I would spend my me time and I have to pinch myself and remind myself that I don't know for sure yet whether or not that's even going to happen.

If she doesn't get in (which is a very real possibility), she'll just be staying home with me for another year.  And I can definitely see the value in that too.  More one-on-one time with my sweet little girl.  More time to work on reading lessons and math and the kinds of things I know she won't be getting from preschool.  More time to go on outings with friends to the zoo and the museum and other random places.  More time to just play outside with her friends.  Less of me having to drive back and forth between home and preschool.

I've already decided that, whether she gets to start "real" preschool or not, we'll still keep doing our daily preschool routine and reading lessons here at home every day.  It only takes 15-20 minutes and I think at this point it's the only way she's going to get any academic learning that's really at her level.  My good friend who's a kindergarten teacher called to chat this evening and when I told her that Olivia counted to 30 all by herself without any mistakes today, my friend was floored.  Naturally I was flattered, but I was also surprised.  I mean, I know that's pretty good for a kid who's not quite three, but, I don't know, it's just our normal around here.  Olivia loves that stuff.  So I'm still planning on doing that with her, maybe in the evenings after dinner or something if she's too tired when she gets home from preschool.

I've also been wondering a lot lately about where we'll live after Bryan graduates.  When he was finishing his undergrad, three years was an eternity.  Now, with grad school graduation just three years away, it seems like such a small blip in the time that stretches out ahead of us.  Especially since, with optometry, you generally kind of pick a place, grow your clientele, and live happily ever after.  It's not like some careers where you move around a lot.  You could, I guess, but it's not really our plan.  Although, ahem, we have absolutely no idea where we want to live.  We like certain things about a lot of places, but most of those places have things we dislike too.  And I know you could say that about anywhere, but when you're looking for someplace to settle down and your possibilities are basically an open book, you want to choose somewhere you're really going to love.  Ya know?  We've tried researching places and making mental lists of what we value in a hometown, but we're no closer to knowing where we want to be right now than we were when we first got married.  Right now I have no idea where we'll be in four years.  I'm not worried about it, but I do wonder about it a lot.

And, of course, I'm still doing a lot of wondering about if and when baby #2 will ever join our family.  Sometimes I feel like Olivia's going to be an only child and there's a part of me that's ready to accept that if that's the reality for our family.  But then other times I feel like I'll be pregnant soon and everything will go well.  My thoughts on this lately are all over the map.  But I think right now I can honestly say that I'm not worrying about it, just wondering.

When I was in high school I was in a play called, "The Best Christmas Pageant Ever" and I played the part of Maxine, who, incidentally, narrates the Christmas pageant.  I've had large chunks of the Christmas story from the Bible memorized ever since, but no part has stayed with me as much as the line, "And Mary kept all these things and pondered them in her heart."

I think you all know that I'm a fairly open book and to keep things and ponder them my heart is something I aspire to do.  I've thought about it a lot over the years as it has related to several different things going on in my life.  I'm still not good at it, but I'm working on it.  And I think I have at least reached a point where I don't worry about the things in my future that I can't control or have answers to right away nearly as much as I used to.  There is such an enormous difference between worrying and wondering.  Subtle though it may seem to the listener, it makes all the difference to the heart.

I have a lot of things in my heart right now.  I'm doing my part to plan for the future, to fill it with hope and joy and the people and things and places I love, but there comes a time (all too often, I think) when we reach the end of the scope of our control and have to wait patiently.

To you fellow waiters I say: worry less; wonder more.  It makes such a difference to the heart.

Word up. Once I realized that we had way too much family to actually end up on the streets, I haven't worried too much about life...wonder, yes a ton, but I can honestly say I am not worried about us surviving and it IS great! I'm glad you just get to wonder about things too instead of worry about things that just aren't yours to micromanage :)

This was a lovely read. Thank you for sharing. :)

We had a lovely talk in church last Sunday about "waiting on the Lord." Your thoughts fit right in with that. She reminded us all the times we wait in our lives, how frustrated we can be with waiting, but it's really a critical skill tied to patience, and one of the key things we came here to learn. Thanks for a lovely, thoughtful post. I'm a fan.

I volunteered at the Head Start preschool in Rexburg during this past winter semester. It was pretty fun. My favorite part was snack time.

Live in Oregon :-) best state ever!

I like that. Worry less wonder more. That makes such sense. Thanks for sharing!