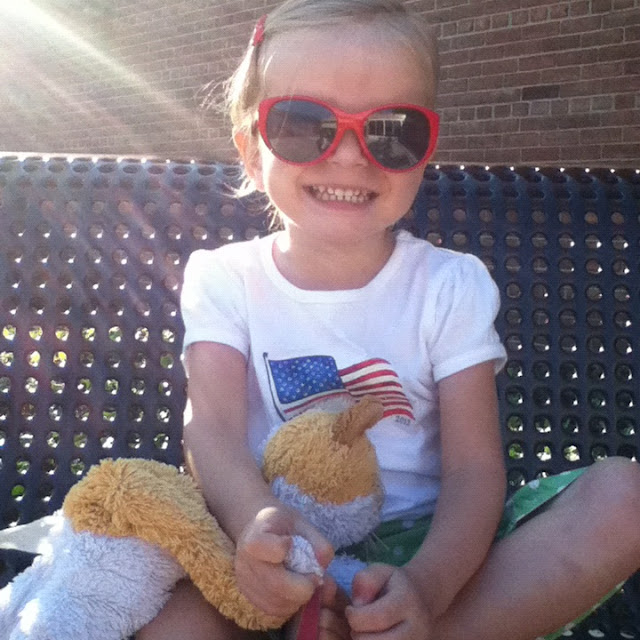 This girl is starting preschool!

Thanks to all of you for hanging in there these past few months while I've been stressing over it.  I was so relieved when I called today and the nice lady on the phone told me that Olivia had indeed gotten in and we'd be getting more information soon.  Hooray hooray!  I am so excited for her.

I think she is just going to love every single thing about it.  We went in today to drop off a bit of paperwork, so Olivia got to see her school (briefly) for the first time and I'm not sure she fully understood what was going on, but she was still pretty excited.  We'll go in to meet with her teacher one-on-one in the next week or two and I think/hope it'll sink in for her a little more after that.

I am of course super excited for her, but I was a little surprised by just how relieved I felt to finally hear that she would be able to start after all.  I had been trying my best to be chill about it and think, "If she gets in, cool.  If not, no big deal."  But when I found out today that she would be starting after all, I realized that part of the reason it's such a big deal is the fact that now I can actually start making some sort of plan for our lives for the next nine to ten months (i.e. the school year.).  I hadn't consciously realized that I was waiting back on news that would make that big of an impact on our lives.

I guess that makes me sound dumb and air-heady, but I had just been putting so much effort into not thinking about it that this morning when I could finally think and plan without reservations it was just this flood of "FINALLY I know what will be going on." I am so, so grateful that she'll get to have this fun opportunity to go to school and make so many friends and do so many fun new things.

I admit, I'm also a little apprehensive, but mostly super super excited for all the hours of personal time I'll have each week now. I'm really looking forward to sitting down and making somewhat of a schedule for myself for that kid-free time.  Some serious book-writing is definitely at the top of my list.  Along with the possibility of some regular cleaning and laundry time here at home.  And this preschool is also very much into having parent volunteers, so I'm hoping/planning to go in and help out at least once a week or so.  I don't know very much about that yet, so I'll have to figure it out when we know more.

Anyway, not much else to report.  I just wanted to pop in and share our fun news!  I know so many of you have been wondering and hoping on our behalf and I just had to let you know!  Hip hip hooray!  Best news of the day!
Posted by Katie Lewis at 2:31 PM

Hooray hooray! I am super excited for you!

Also, it was so, so, so nice chatting with you on the phone last night. I sure miss you.