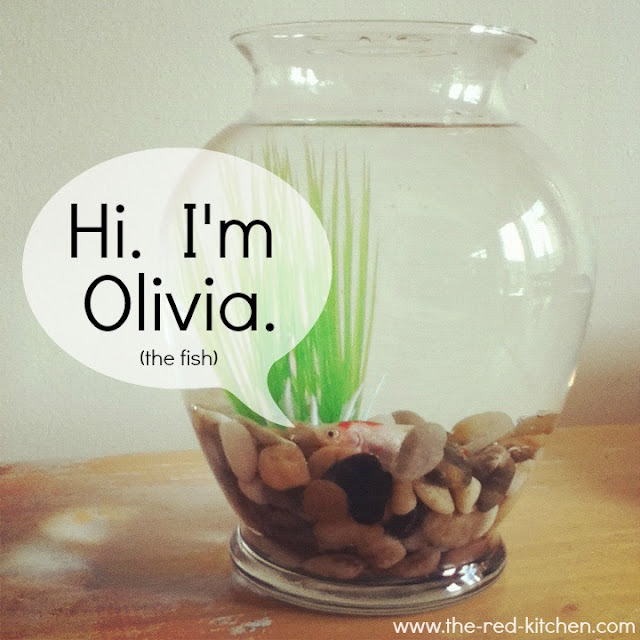 Everybody, meet Olivia (the fish). 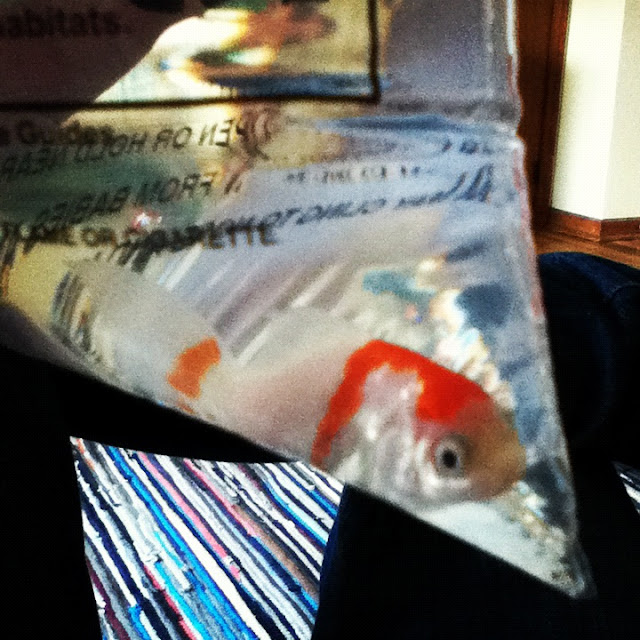 He's white and orange and he came home with us in a bag. 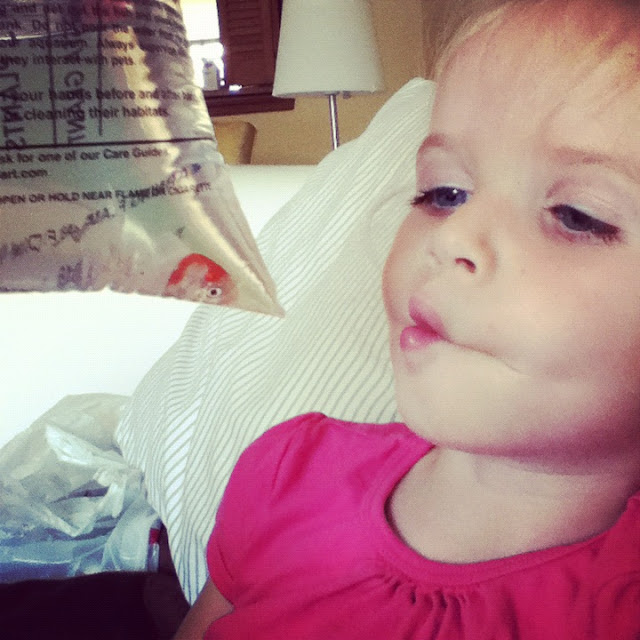 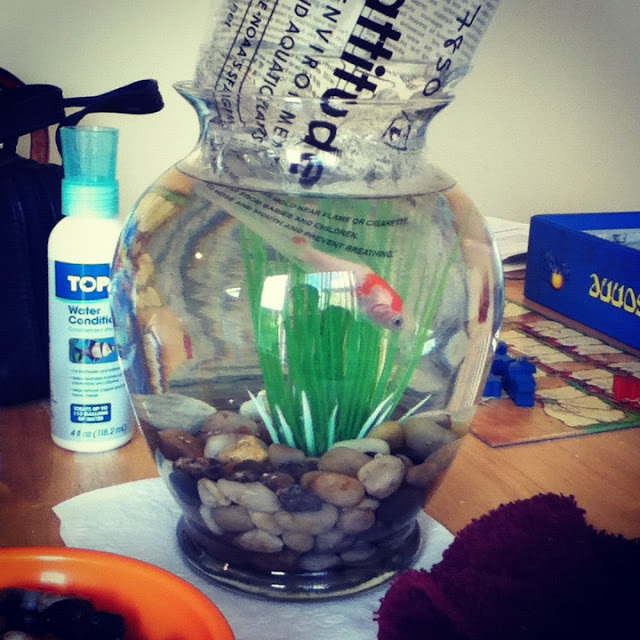 We bought him a vase for 45 cents at the thrift store, some pebbles from the dollar store, and a fake plant from the pet store.  We also got him some water treatment stuff and some goldfish flakes.

Here he is acclimating to our room temperature (and appropriately treated) tap water from the comfort of his plastic bag. 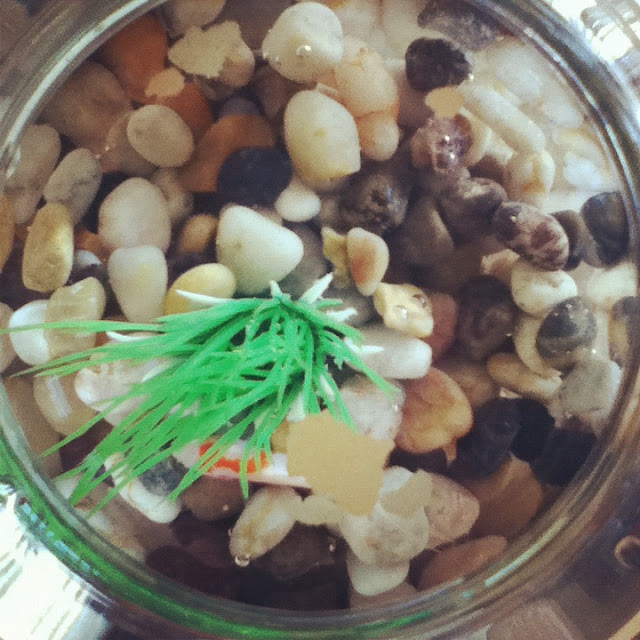 When we let him loose later he even charmed us with his mad hide-and-go-seek skills. 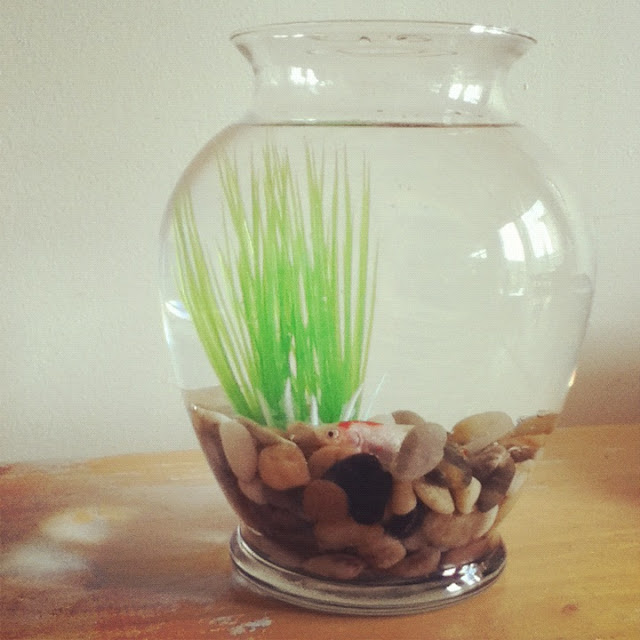 So, we bought a fish today.  Guess who named it.

Bryan doesn't know yet that we got it.  Although, in all fairness, I did warn him the other day that I was thinking about buying a fish.

The truth is, I've tried to talk Bryan into buying a fish several times since we got married.  I've succeeded a couple times, but the fish always dies a day or two later and then Bryan goes back to his Scrooge-y ways.  So I may have gone to buy the fish without him on purpose.  Heh heh...

I had actually planned on buying a beta fish.  I had a couple of beta fish (one at a time) for a while in high school and college and they were pretty hearty.  My beta fish named Jackson was one that I got during my junior year of high school and it lasted all the way through my sophomore year of college.

He even survived enjoyed a couple of trips on the airplane with me.  He rode in my old Nalgene water bottle.  And, yes, it was after the airlines were super strict about taking liquids on airplanes.  Luckily the airport security figured that if I had a live fish actually swimming around in the water then it probably wasn't a bomb.  (Side note: It wasn't a bomb.  Score one for airport security using some good old common sense.)

Anyway, since Bryan and I got married the only fish we've ever had have been super cheapo goldfish.  You know, the kind that they sell for 17 cents each that are really only meant to be sold as food for other fish.  Man, whatevs.  Goldfish are real fish too.  (Though, admittedly, they do have a rather short shelf life.)

But, ahem, you may have noticed that Olivia (the fish) is not a beta fish.  He's a goldfish.  Partly we got him because he's so cute.

Also we got him because they were out of the cheap beta fish when Olivia (the girl) and I went to the pet store today.  I had spent the whole trip to the pet store telling her how we were going to get a fish to bring home and after we found the fish we wanted wasn't available today she was getting pretty sad when I told her we'd have to go back another day.

So instead I totally caved and bought a 17 cent goldfish instead.  The new shipment of cheap beta fish comes in on Thursday, so I figured Olivia (the goldfish) could hopefully survive until then and then if he's still alive we'll just keep him instead of getting a beta fish.  If he doesn't make it until Thursday, we'll go get a beta fish.  Sentimental, I know.

But actually I did want a fish for sentimental reasons.  Olivia (the girl) is starting preschool next week and she'll be gone almost as much as if she were in half day kindergarten.  My heart is saying "Yahoo!" and "Boo hoo," all at the same time.  I'm excited for all the free time to be able to focus on things and hopefully be really productive.  But I'm not excited for the loneliness that may set in.  So I thought I'd make sure I'm not the only living thing in the house when she's away.  Hence, the new addition.

Obviously Olivia (the fish) isn't as friendly and cuddly as a dog or something, but we're not allowed to have pets (other than fish) and, anyway, I really am not interested in all the fur all over my stuff.  And I had fish a lot when I was growing up, so, despite my realistic views on the lifeline of the common goldfish, I am a little sentimental about them.

Here's to hoping Olivia (the fish) doesn't die before tomorrow morning and I have lots of fun frolicking through the woods together and working on sewing projects while Olivia (the girl) is busy having the time of her life at preschool.  :)

Thanks to this post I am now googling pet stores and going to get myself a fish today.

Hmmmm....thinking of buying a Betta fish. I miss having fish around! :)

The last cheap goldfish I bought lived for almost 2 years. So amazing I have no idea how.

I want a picture of Bryan meeting Olivia (the fish).

A beta fish is the only fish that can survive very long without an active water filtration system. (I learned this the hard way, and then asked at the pet store). If you want Olivia to survive the first week and beyond, you can get a really cheap set up from pet-smart.

Oh Jackson and his crazy rusty mason jar lid hoop...those were the days :)

:) Cute fish! I think it's funny that Olivia named the fish after herself and now forevermore (or as long as the fish lasts...) you will have to write (the fish) or (the girl) after every Olivia. Also, Carcassonne!! One of our favorite games!