Olivia has been in serious need of some new shirts.  Most of her shirts these days are too short and too hard to get over her head.  I tried to just go buy some, but apparently most kids grow proportionally (like, you know, they get bigger around and taller at the same time) and Olivia is not most kids.  She is long and skinny with what must be a big head because it never wants to fit through her shirts.  Anyway, yesterday I finally got busy and made a few new shirts for her. 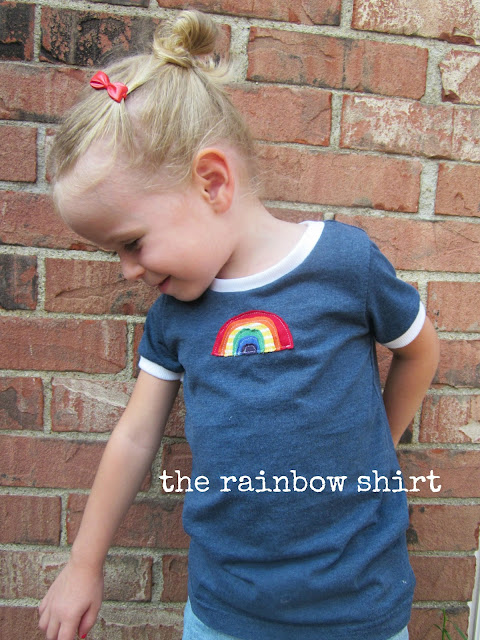 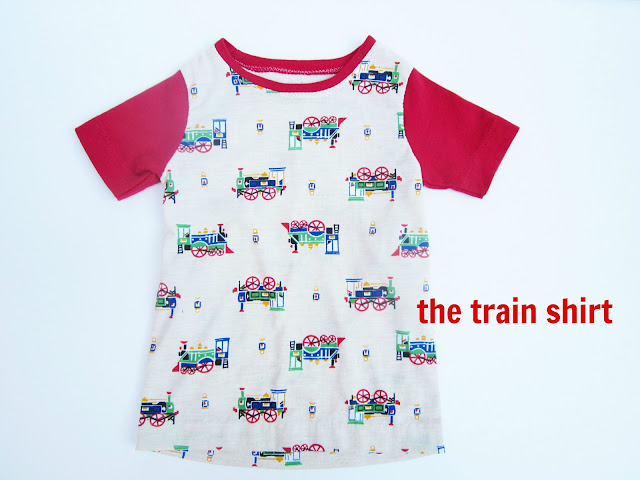 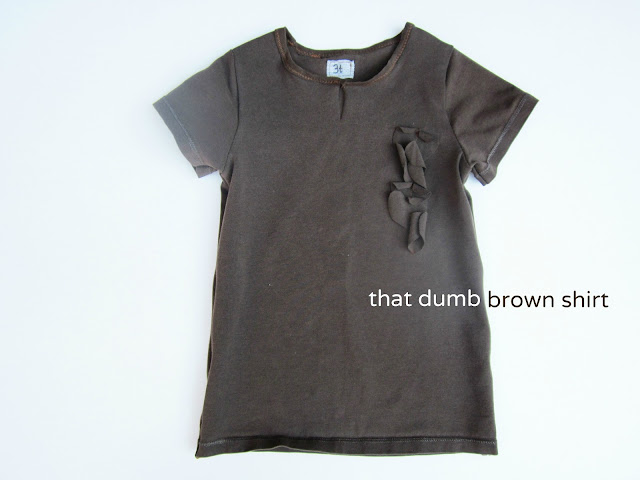 All of these shirts were made using Rae's Flashback Tee Pattern (in size 3T... sort of). 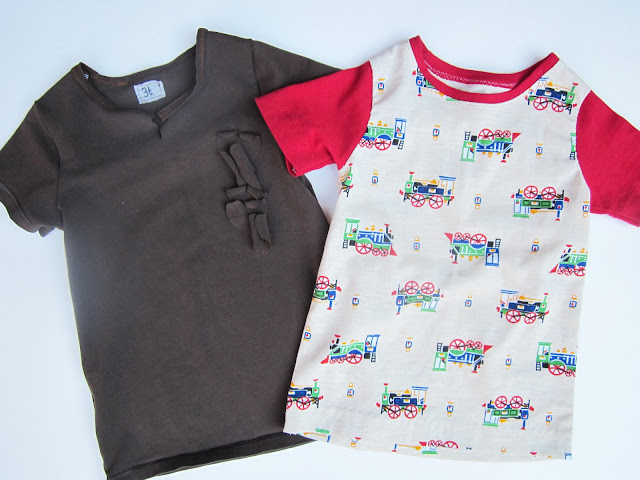 The first couple of t-shirts I made for Olivia (a while ago) from this pattern were just a little wider than I wanted them, so I decided to try and slim the pattern up a little, which was, in retrospect, a bad idea.  Haha. Apparently I've already forgotten everything I ever learned in my college sewing classes about how to alter patterns because my first two attempts (the train shirt and that dumb brown shirt) had neck holes that were too small.  Boo. 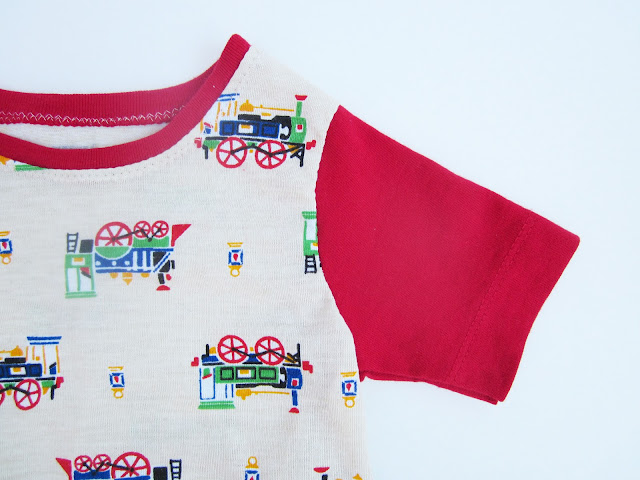 I tried the train shirt on her and it was hard to get over her head, but it seemed like maybe the maiden voyage over her head stretched the neck hole out enough that it'll be doable.  I guess we'll see. 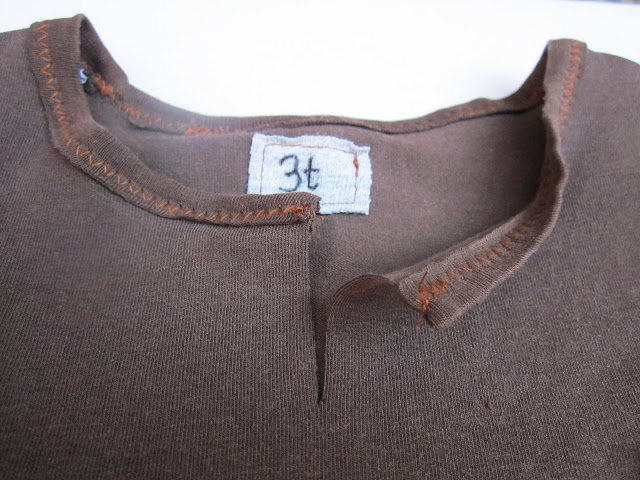 Unfortunately, I had already cut out the pieces for that dumb brown shirt before I tried the train shirt on her, so I opted to just sew it up anyway and then cut a small slit in the neck so her massive lovely head would fit through.  I haven't actually tried this shirt on her yet.  Probably because it's ugly and I hate it.  But Bryan doesn't seem to notice what he dresses her in when he takes on those duties, so I'm sure she'll end up wearing it sometime. 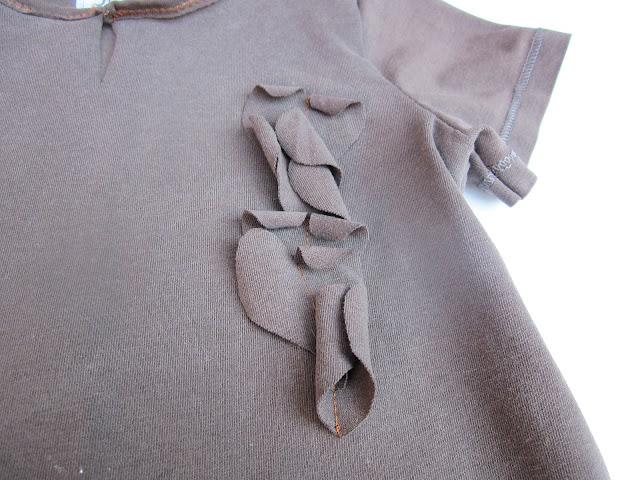 In case you're wondering, those weird extra things on that dumb brown shirt are hearts that I just sewed down the middle.  I've done that before and it was really cute.  ...  Yeah, not feelin' it this time.

Probably  my least favorite thing about this shirt is that light-ish brown thread I ended up sewing with.  I'm all for contrasting threads and whatnot, but this thread just plain clashed.  Oh well, at least now she'll have a pajama shirt that actually covers her little belly. 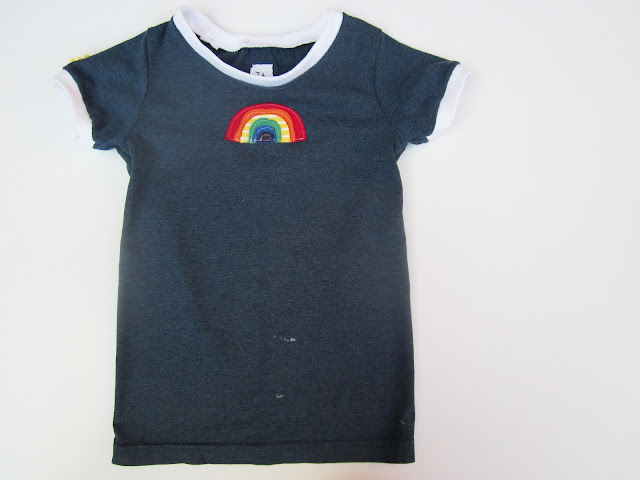 The rainbow shirt definitely cleansed my palate of that dumb brown shirt.  Olivia has really had a thing for rainbows lately, so it was a win from the start. 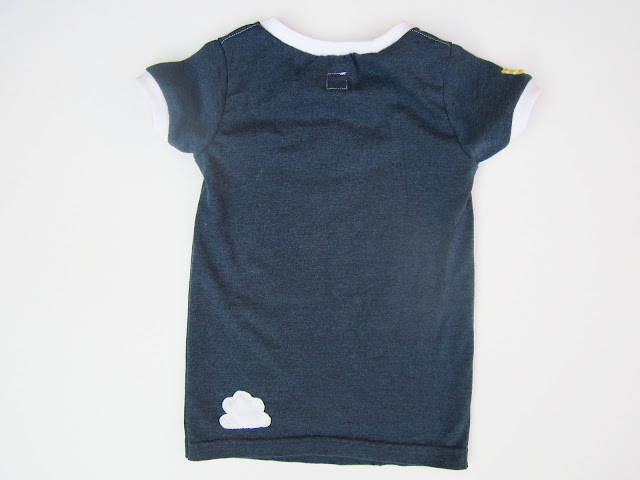 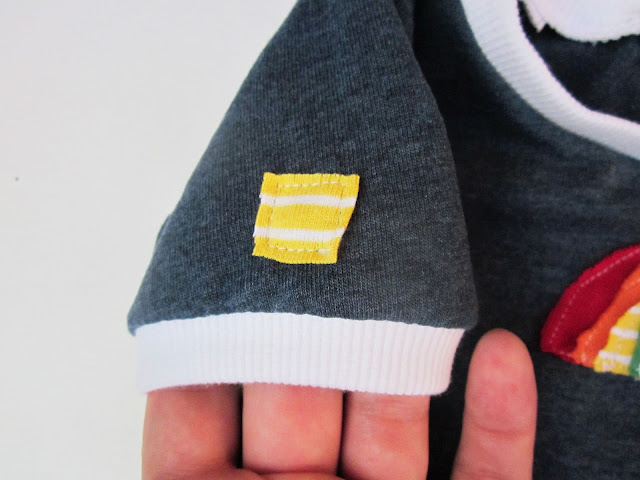 I also added a little sleeve tag on this shirt.  It doesn't really serve any purpose, but I like it.  I am also kind of deeply in love with the white ribbing on this little t-shirt.  It's so stretchy and soft and it ties the whole funky look together. 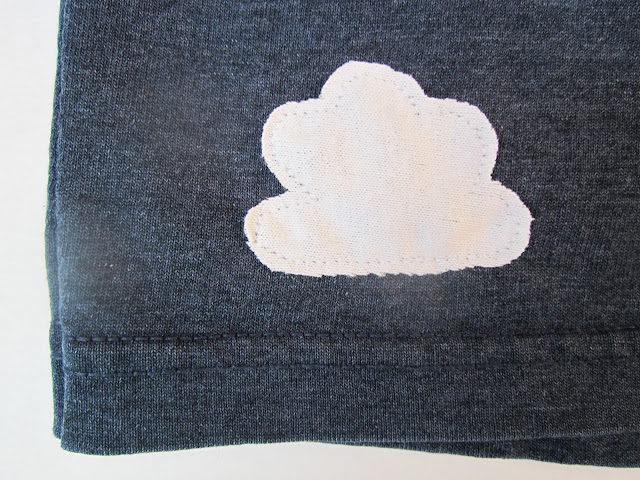 The rainbow, cloud, and tags on this shirt are all just stitched on using a regular straight stitch on the machine.  Easy peasy, but if you decide to try it, just know that it's usually better to take it slow and use the hand wheel. 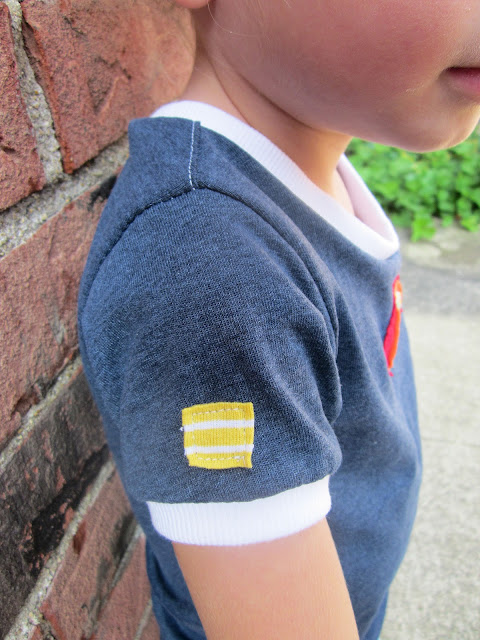 I also did a bit of detail (straight) stitching across the shoulders.  Partly for show and partly to keep the seam allowance back there where I want it. 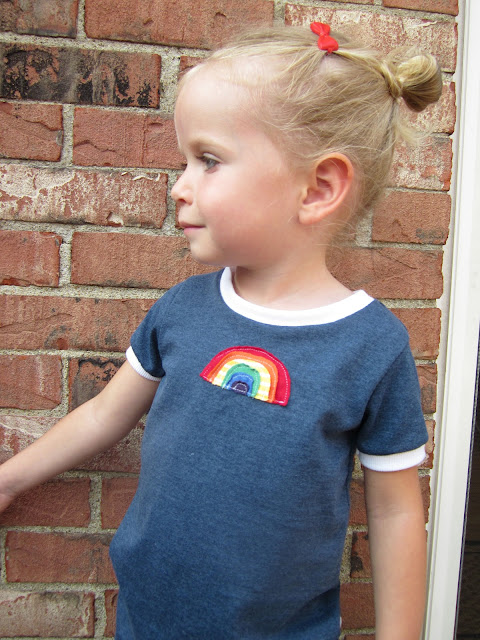 I finished it up last night and when I showed it to her this morning she got super happy and wanted to wear it right away.  Score. 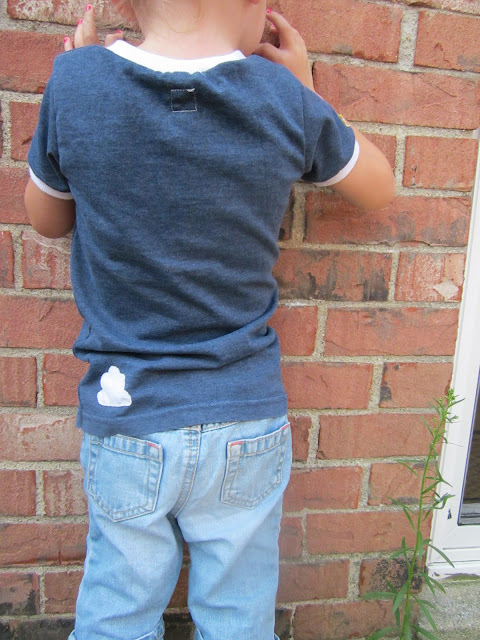 She loves the cloud just as much as I do, by the way.  After I did her hair this morning she kept trying to turn her body so she could see the cloud in the mirror.  :) 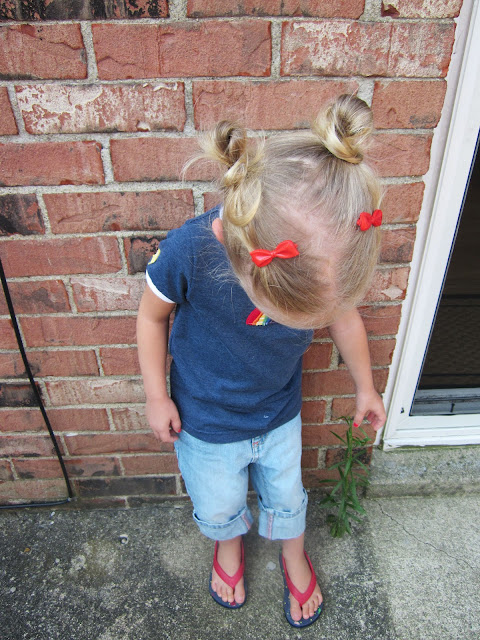 Here she is admiring her sweet new threads. 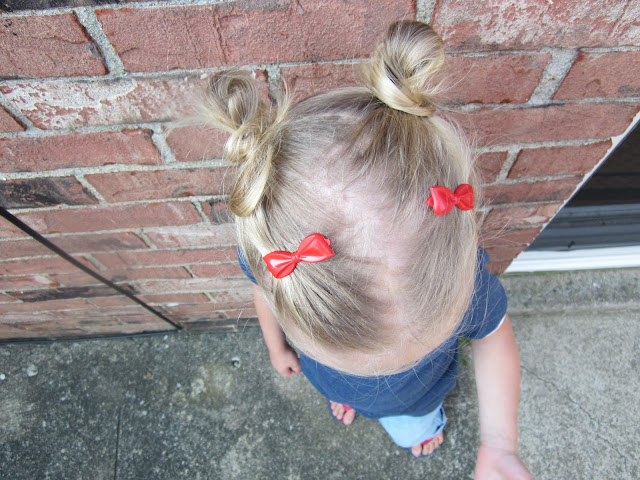 We added some cute piggy tale buns, a couple of "vintage" clips left over from my childhood, and a favorite pair of cherry flip flops. 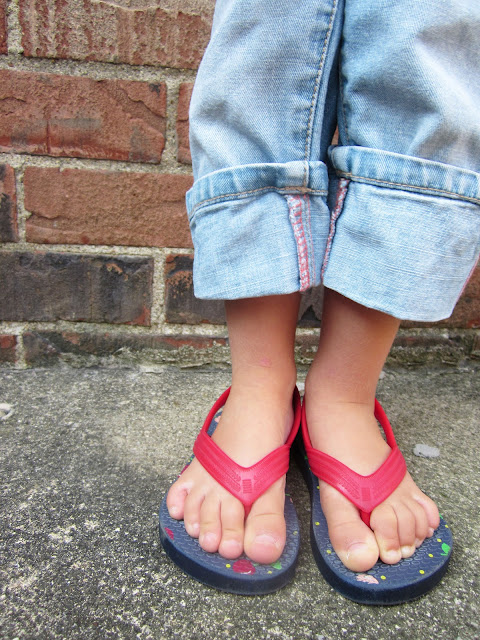 Now she's all bright and cheery from her head to her toes.  :)

Three shirts down!  How many more to go?

That pattern sounds like one I need to get. I have tall skinny girls, and one boy that is tall and skinny. I have the hardest time finding anything that might work. The only place I have found some shirts is Walmart, in their faded glory brand. The plain shirts seem long enough. Surprise surprise, right?
Super cute! Now if I can only overcome my fear of knits...:)

I am always in awe at the amazing things you can create. This is not a lie.

Also, maybe I'm ruining my reputation for being super fashionable (b/c I know I have one with my sweet knee high socks), but I think the dumb brown shirt is kind of cute. :)

I think all 3 shirts are cute, but especially the rainbow shirt. Yay for a darling shirt on a darling girl! Such a clever mama.

Very cute shirts! I'm very impressed with the rainbow and cloud. No wonder Olivia liked the shirt so much!