The funny thing about me 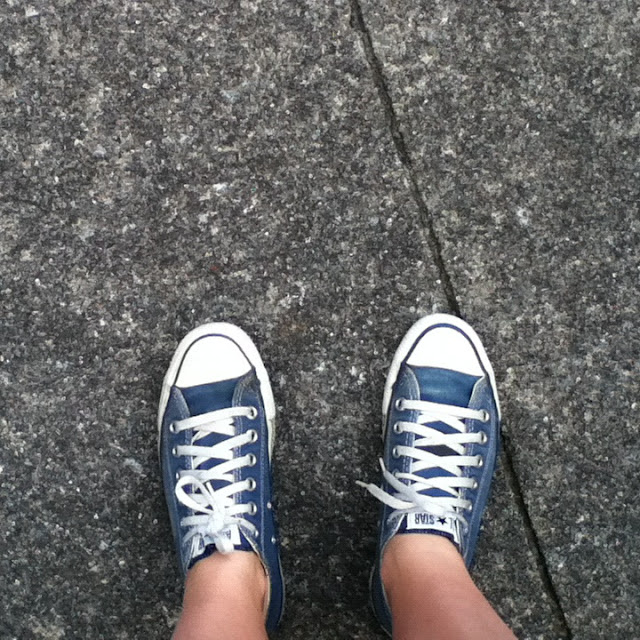 The funny thing about me is that most of my stressing about things happens during the phases of the unknown.  "Am I pregnant?"  "Will Olivia get into preschool?"  "Where will we live when Bryan graduates?!" The unknown stresses me out.  Which is funny, really, because that's when nothing is really happening.  It's also when there's nothing I can really do about the situation.

All last week when I was waiting to find out (yet again) whether or not I'm pregnant?  TOTAL STRESS.  Today?  Meh. If you asked me how I was and I said, "Fine," I wasn't faking it.  I meant it.  I really am fine.  Even though yesterday I was an emotional wreck.  And yesterday there was still some hope that things were going my way.  Today I know for sure that's not the case, so I'm ready to deal with it.  Because I can deal with things once there's something to deal with.  It's the not knowing what's coming that kills me.

I guess, in my own way, I'm really just a control freak.

Bryan made an interesting comment about me today, which I've reflected on and I definitely agree with what he said.  I'll tell you what he said, but first you need a little background info for it all to make sense.  Or maybe I just want to tell you.  So I will.


So I belong to a group here called the "Optometry Wives Club" or something like that.  Each month during the school year all of the wives with husbands in the optometry program get together for some kind of activity once a month.  (Everybody takes a turn hosting and planning an activity.)  I participated in most of the activities last year and, while I admit I wasn't very excited about it at first, I was totally hooked by the end of the school year.

It was such a good way to connect with women who are living parallel lives.  We could commiserate about never seeing our husbands during midterms and finals.  We asked the wives of the older students how they made plans for life after graduation.  We swapped parenting stories.  We met other times during the month just so we could get together and let our kids play.  The girls I met through Optometry Wives are now some of my best friends and it is invaluable that we share so many questions and hurdles in everything we're experiencing right now.

So last year at the beginning of the school year there was an Optometry Wives picnic/BBQ.  The entire family was invited and we all just got together to meet each other (which was nice for us new 1st year wives), eat food, let our kids play, and have a good time.  The fact that we could go with our husbands made the whole thing less awkward/scary/intimating and I personally felt what an important event that was for helping new people feel comfortable at the later events that were mostly wives-only activities.

Well, long story short, the start of this new school year was looming closer and closer and there hadn't been any word yet about the opening social picnic/BBQ thing.  And you know how I am.  It's the not knowing what's going on that I can't handle, right?

So I e-mailed a few of my friends from Optometry Wives to ask them what we ought to do.  They all very kindly gave their input, but one of them was about to have a baby and the other two were out of town.  Which, you know, left me.  Thanks guys.

So guess who planned the opening social?  Yeah.  Me.  But it was no biggie.  All I did was pick a date and send out an e-mail.  That's not hard.  I figured I'd just have this count as me taking my turn to host.  Check!  Done and done.

Well, then this evening we were at a different optometry student picnic and while we were chatting with one of the wives we hadn't met before, she turned to me and asked, "So are you in charge of Optometry Wives?"  I laughed and told her that, no I definitely wasn't and she shouldn't get that impression at all.  But I'm not sure she heard me because at that exact same moment my other two friends (who are conveniently done have babies and being out of town now) quickly told her, "Yes!  She is!"

One of my friends even took that opportunity to confess that she had thought about sending out the e-mail about the opening social several times while she was on vacation, but didn't do it because she knew that whoever finally sent out the e-mail was "going to be in charge of it for the next three years."  (Don't worry.  I'll get her back.  I'll get her back reaaaaaal good.)

So.  Apparently I'm in charge of it for the next three years.*  And all because I simply cannot handle the waiting game.  Ha.

Why I was I talking about this?  Oh yeah.  Because that's the funny thing about me.  That I can't handle the unknown.  The problem is, people are starting to get this idea that I'm a party planner and an organizer and a leader of some sort.  Which, by the way, I am not.  At least not like they think I am.  I'm happy to make new friends, but when it comes to all the little details that go into planning a great event, I crack under pressure.  Things slip.  Or I go overboard trying to remember everything and end up taking forever to actually fall asleep at night because I keep sitting back up to write little notes to myself about all the things I know I'll forget about by morning.

When I told Bryan about the whole "now I'm in charge" thing on the way home, he commented, "I think you just like things to get done."  And he's definitely right.  That is the truth about why I end up springing into action to plan events that I feel totally incapable of planning or that I have no desire to be in charge of.  It's definitely not that I'm seeking for some position of power.  I am exactly the wrong person to be in a position of power.  It's just that I like to know that things are done.  Which is fine, I guess.  I don't mind planning a family BBQ.  But I am nervous about people thinking that I'm somehow in charge.  Or that if things fall through the cracks they're going to be like, "That Katie Lewis..."

I really must get back to wondering about things instead of worrying about them.  Obviously I forget.  Sometimes I feel like I have the attention span of a goldfish.

Bah.  Anyway, here's to trying to be patient in all the big things in life that I can't be Done with yet.  And, in the mean time, here's to dealing with the little things that can get done.  (And that will be done by my lazy, sneaky, baby-having friends from now on.)


*When I sent out the e-mail I did it because I thought that the only older girls who might had just barely had babies of their own.  I was since reminded that one of the other wonderful girls who did not just have a baby is still here!  (She's so much more mature and put-together than I am that I thought she was older and had just moved out with the last batch of graduating families.)  Hooray that she's still here!  I sent her an e-mail letting her know that I was happy for her to take over and have full "being in charge" rights just as soon as she wants them.

I haven't heard back from her yet.  But I'm not giving up hope.
Posted by Katie Lewis at 10:38 PM

Ha ha, Katie, I loved this post. It hit home in so many ways. At first I was feeling almost famous for getting the Optometry Wives thing going last year; I'm glad it was such a success in getting the new wives integrated. Then as you went on, I was totally relating...since I seem to be a bit of a control freak too and since no one was heading it up last year or the year before, I kind of took charge. I have to say, in all four years I was there, last year was the most active/attended of the OWNights. The whole "in charge" thing isn't really a big deal, just put the calendar together and send reminder emails and you're good to go. Good luck! I REALLY miss you guys! I wish we still had OWNights!

So despite what it seems, I wasn't just trying to be spiteful or pass the buck on being "in charge" of optometry wives. It's just that as Noelle said, heading it up mostly just means sending out occasional e-mails to get people to sign up and keep things on track. I think we both know, that sending out and checking e-mails in a timely manner is not my strong point, so I figured that having me "in charge" was not the best idea. I admit I laughed through a lot of this post, but please don't get me back too bad :)

I love the way you let us inside your brain. Thoughtful and insightful and fun to read. Haha - I think you got your "not-a-party-planning-pro" gene from me. Sorry about that.

That is funny. I would definitley say you are an organizer...but yeah probably just so you don't have to wait for someone else to do it. I found a good part about that is then you can control dates/times/etc. when you actually have a preference...woohoo!

This post describes me in so many ways! Glad I'm not the only one! I definitely stress more about the not knowing than anything else. And I definitely end up being unintentionally in charge of things simply because they need done, and the not being done is more stressful than just doing it! Oh man... I think it's a control thing and a lack of patience for me. :)