Today was, well, one of those days.  I give you the following proof: 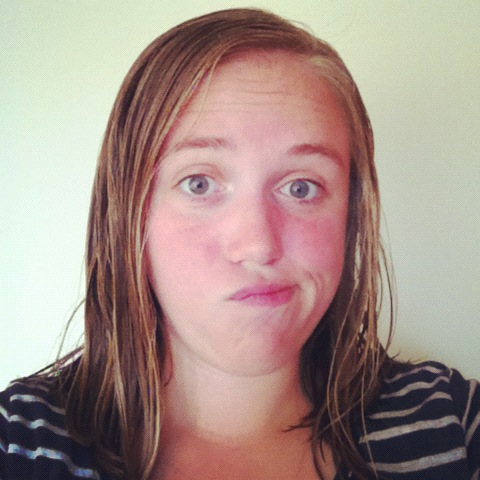 Me with my wet hair down.

This is the one nice thing I have to say about having my hair down: it makes my face look slimmer (sometimes). 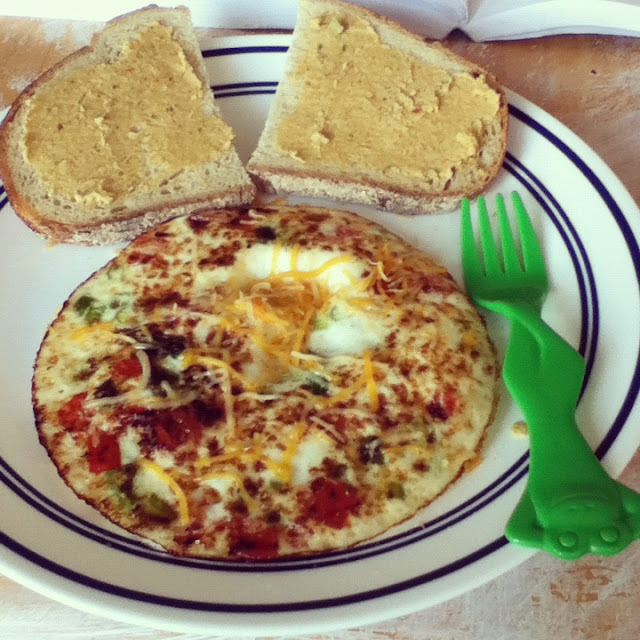 On Sunday I had a super bad headache and stopped Bryan during his emptying of the dishwasher because the clanking of the silverware was unbearable.  On Monday I forgot that I had stopped him halfway through his kind act of emptying the dishwasher and I thought the mostly-empty dishwasher was dirty.  And I, uhh, put a fork with raw egg on it right in with all the clean silverware.  Sigh.  On Tuesday (today) all the silverware was dirty.  Luckily this frog fork (is it just me or is it in kind of an awkward pose?) happened to be clean.  Unfortunately, it doesn't cut through my gourmet omelet very well.

Shortly after I ate my gourmet breakfast I crashed on the couch while Olivia watched a show and climbed all over me for an hour.  When I woke up and thanked her for being such a good girl while I took a nap she responded, "I get a penny?"  Yes.  An hour long nap is definitely worth a penny. 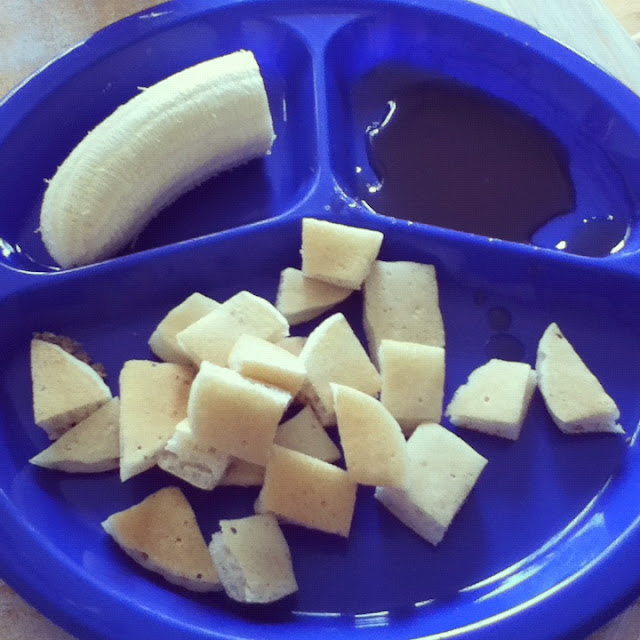 We had pancakes for lunch.  I usually have half a tuna sandwich and I make a peanut butter and honey sandwich (or whatever) for Olivia, but today my energy was zapped (remember I went running early early early?), so we had pancakes.

FYI: It's so much easier and less messy if I use kitchen scissors to cut up Olivia's pancakes ahead of time and serve the syrup on the side.  I don't know why it's so much less of a mess, but it is.  Also FYI, she didn't touch that half of a banana. 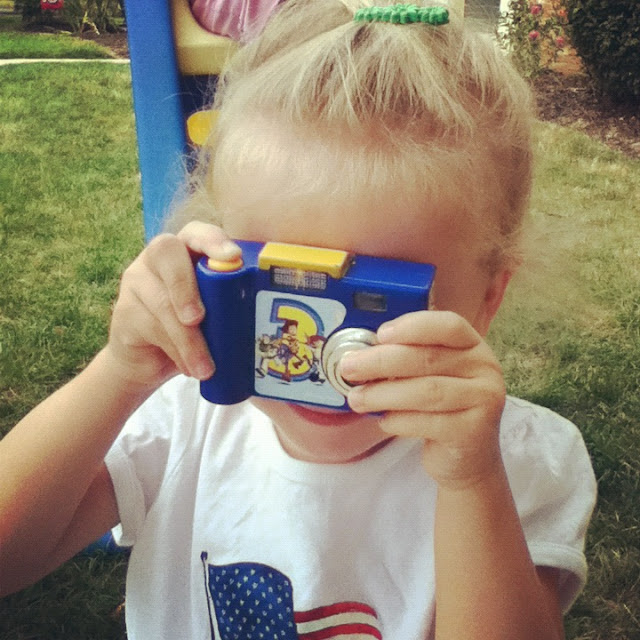 After lunch we played outside for a little while.  Olivia enjoyed this toy camera that made obnoxious sounds every single time you push the "take a picture" button.  Luckily it doesn't belong to us.  Still, it was pretty cute to watch her take pictures of me and her friends for quite a while.  I think she would have a blast with one of those "real" kid-friendly cameras.

After our escapades outside we came home and Olivia took a nap (and kept her panties all clean and dry!  Hooray!) while I watched some HP 7.1 and made some random tiny things.

Side note about Harry Potter: I've read/listened to all of the books and seen all of the movies several times, but in January I decided to actually read (i.e. not listen to the wonderful Jim Dale in the books on CD) the entire HP series.  I'm ordinarily not much of a reader, but after I miscarried I was so sick and so bored and I decided a little HP was just what I needed.

I was never one of those die-hard fans who has loved HP from the start.  I had somewhat of an aversion to the whole thing for a while because it was so popular, but once I got over myself and realized how wonderful they are, I've enjoyed the series a lot ever since.  I've been reading through the series since January and I just finished the last book last week.  I was a little surprised to find myself going through withdrawals, but when I realized that I had had HP somewhere in the back of my mind for the past seven months, I understood a little better.

Anyway, the movies are nowhere near as satisfying as the books (especially when you're painfully aware of all of the details that are totally changed or left behind in the movie versions), but watching it helped fill the void a little today.  Sometimes you have you wean yourself off these things, you know.  (End of side note.) 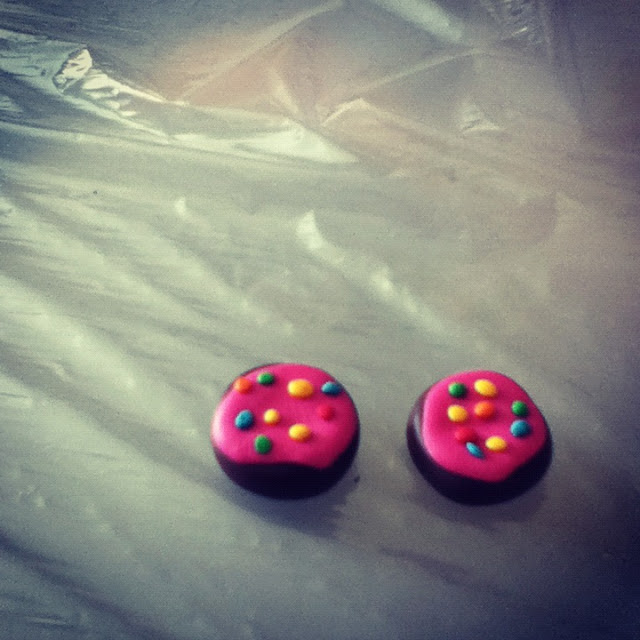 I have no idea why, but a day or two ago I was seized with this desire to make really tiny doughnuts from some of the left-over clay that I use to make my buttons.  As it turns out, I am fairly un-skilled at crafting miniature food out of clay, but, well, here it is anyway.  I couldn't get the doughnuts to have holes and look normal, so I finally settled for these "jelly-filled" ones. 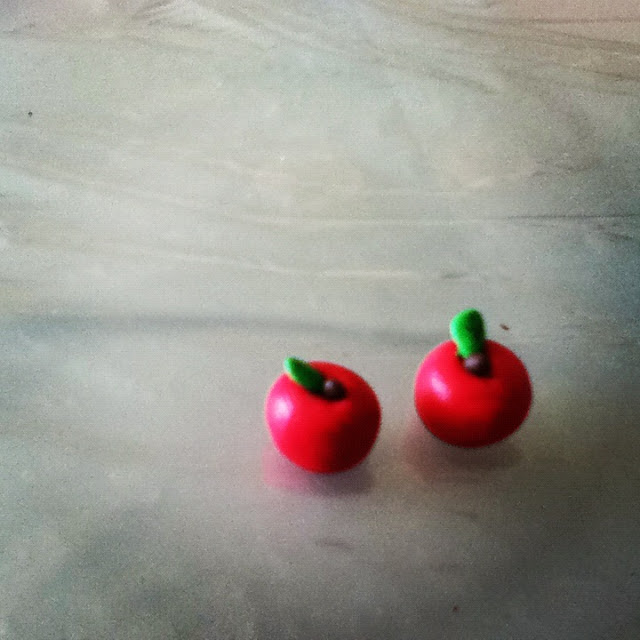 Next up, teeny tiny apples with even teenier tinier leaves and stems. 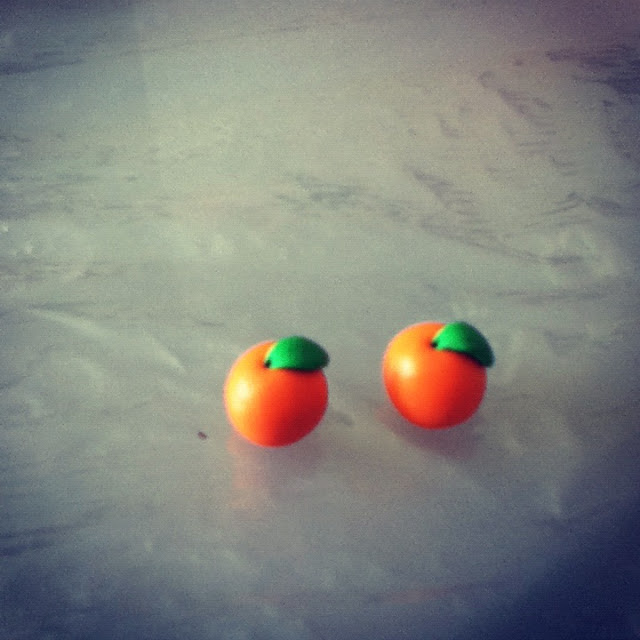 These little oranges are my favorite pair from the batch of things I made today.  So, ya know, just fair warning that it's all down hill from here. 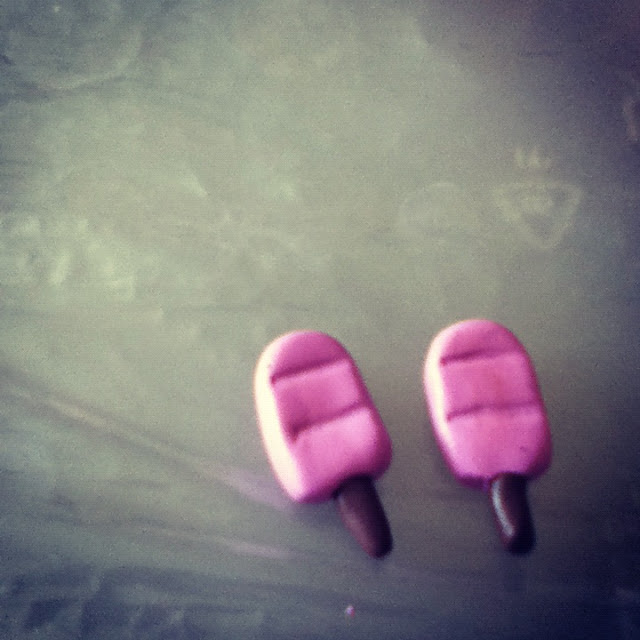 A petite pair of plum popscicles. 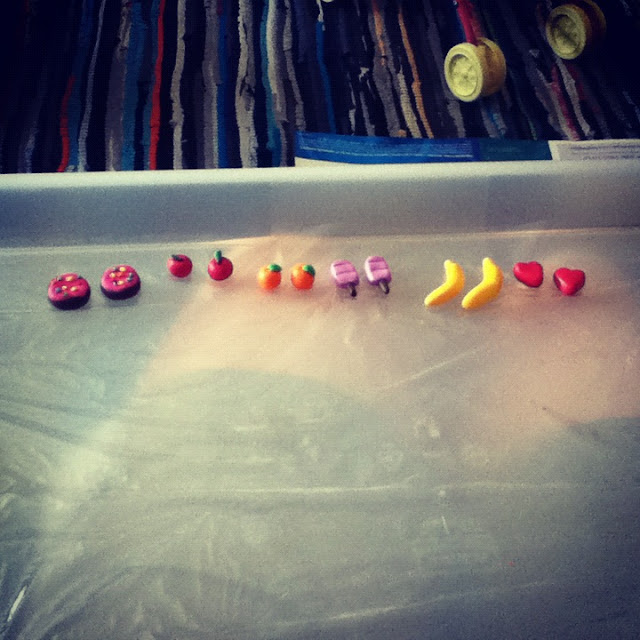 I was especially flattered when I showed these to Olivia after her nap and she correctly identified all of these things without any prompting from me.  Bryan failed this test, by the way.  He was obviously unsure about the doughnuts being doughnuts and he thought the popscicles were maybe "square grapes."  He made up for it a little by admiring the tiny stems on the apples for longer than I expected him to.

After Olivia woke up from her nap we did her reading lesson.  Usually she's very happy and enjoyable/adorable during her reading lessons.  Sometimes she makes me want to pull my hair out.  Today she was reading the words "Mad at me."  Ha.  A little too ironic.

After that we made a thrift store run which turned out to be not very fun either.  Crazy half price day, only one little shirt to show for it, and a bathroom that was out of order just when Olivia needed it.  Enter the trip to the icky bathroom at the sketchy grocery store next door.  An old man walked out of the one unisex bathroom right before we walked in and I just knew it was going to be bad.  It smelled bad and I was already stressed and I was so grossed out by the whole thing that I startled Olivia into not wanting to pee anymore and then I got cranky when she didn't and then Bryan happened to call right at that moment to say he was ready to be picked up from work.  Poor Olivia.  It wasn't her fault.  And poor Bryan.  I was so cranky and short on the phone that he thought he had done something to upset me. 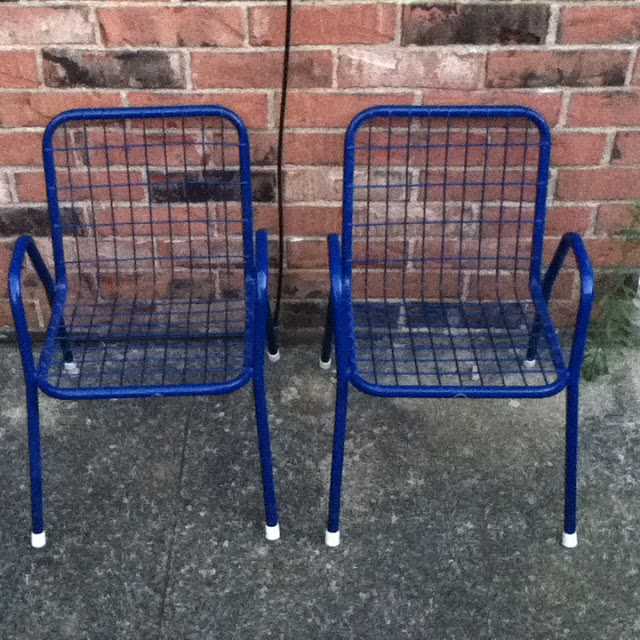 After dinner Bryan and Olivia had some quality daddy-daughter time while I escaped to run errands by myself.  It wasn't a bad day all around, but there was just enough whining and craziness that I needed some alone time.  You know you're a mom when a trip to Walmart for bathroom cups and undies sounds wonderful.

I also snuck in a trip to JoAnn for some fabric (for another book project) and a trip to Goodwill to try and look for more shirts for Olivia.  I have since decided that the reason I'm having such a hard time finding shirts for her is because the 3T shirts are too wide and the 2T shirts are way too short and her head won't fit through the head hole anymore.  I've been telling myself for months that I'll just make her more shirts (heaven knows I have plenty of old t-shirts in my stash to cut up and put to good use), but I've been so focused on sewing projects for the book that I haven't had a lot of time or enthusiasm for sewing kid clothes for quite a while.  But after my rather fruitless attempts to buy her clothes today, I've decided I just need to buck up and set aside some time to restock her wardrobe.  Unfortunately, I think that also means I'm going to have to actually clean up my sewing area.  Why is it always in such a constant state of disarray?  Sigh.

At least I didn't come home completely empty-handed.  I scored these sweet little retro chairs for $2.99 each at Goodwill.  I love the look (they remind me of some chairs from my friends' house growing up) and I think they'll be good indoor/outdoor chairs.  Hopefully someday I'll be glad I went ahead and bought them both.

After I got home Bryan and I played Ticket to Ride twice and ate pazookies.  Then I got on the exercise bike and rode for an hour while I watched episode 5 of the second season of Downton Abbey.  Did you know you can watch it for free online if you have Amazon Prime?  My friend told me that a couple weeks ago and since then I've been watching an episode at a time while I ride on the exercise bike.  I wish I could say that my efforts on the bike are obviously making a difference, but, well, so far I've basically stayed the exact same weight and pudginess for the past few weeks.  Boooooo.  I have been counting calories and exercising a lot (and in a variety of ways) and still I look pregnant even though I'm not.  I'm trying to just be proud of myself for going running 4 times in the last 7 days (not to mention several walks and rides on the exercise bike too) and not be really annoyed that my body seems not to have noticed.  I wonder if I'll ever have a flat tummy and be as thin as I want to be.  Sigh.

Anyway, today has been one of those days.  Not bad, but not the best day ever either.  Just a regular kind of day.  I guess that's a good thing.
Posted by Katie Lewis at 1:10 AM

We totally had those chairs growing up, we had red, light blue and white. What a find!

I have been thinking about you, KT! Golly I miss you. You and Whitney should probably get together with all of those clay skills.

Also, I have not gotten over myself and realized how wonderful HP is yet, but I have been thinking about it. You are more humble than I!

Mostly I love you is all.

i take pressure from kt very seriously! post is live, just for you. :)