Better Days & Getting Beat Up 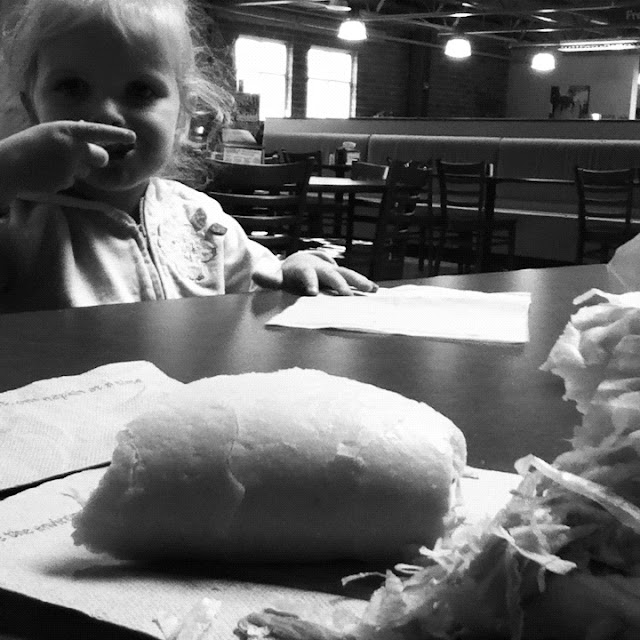 Thanks so much for all of your kind words and commiserating on Monday's post. Glad to know I'm not the only one. By way of update, the past couple of days have been much better. Yesterday we were almost tantrum-free, but then some soap got in her eyes during her bath (even though it's that Johnson's baby stuff that's not supposed to bother their eyes...?) and it totally flipped the switch. Five minutes before bed time and she was kaput. Poor kid. She really is growing out of her nap and, for the most part, she does really well without one, but she is so wiped out by the end of the day. Tonight we got her in bed an hour earlier than usual and life was so much happier. So doing that again tomorrow.

Something else I've been doing to help us both be happier is to keep us busy. Duh, I know. I was trying to do this before, too, but, ya know, I'm trying more now I guess. After preschool we usually have a few hours to kill before all of her friends wake up from their naps, so today we went and got a sandwich at the swanky grocery store. We also bought a cookie card for $1 a while ago, so she gets a free cookie from the bakery every time we go there. Here she is munching away on some double chocolate chip goodness. Happy kid.

Mostly out of guilt for making him late to school this morning, but also because I like Bryan a lot, I got a big sub sandwich, ate a third of it for lunch, and then cut up the remaining two thirds and made him extra special lunches for the next two days. School is really hard and really boring for Bryan and really full of too much studying and too many tests lately and I'm trying to do my part to give him something during his school day to look forward to. After overhearing part of one of the super boring lectures he sat through today I feel even more sorry for him and even more glad I did something special for him.

On the same note, I have been trying harder than ever before in our marriage to keep the house clean. It bugs him and distracts him when the house is dirty and it makes it hard for him to study. He never complains about it, but instead of studying he's apt to do the dishes or pick up the living room instead. Even though that's basically my entire job description right now and I have all day to do it. Hmm. So I'm trying to be better about it. If he gets a bad grade on his test it is not going to be because he was distracted by our messy house or too busy washing the dishes to get any studying done. Well, okay, it might be because of that, but at least I'm trying. The other day he was noticing how clean it's been (it's a pretty stark difference, so it's not that hard to tell) and he said, "Thanks so much for cleaning up so much. I know you hate it." Ha. My womanhood would be offended, but, actually he's right.

And, on a completely unrelated note, I have been beat up for five days now. By whom, you ask? 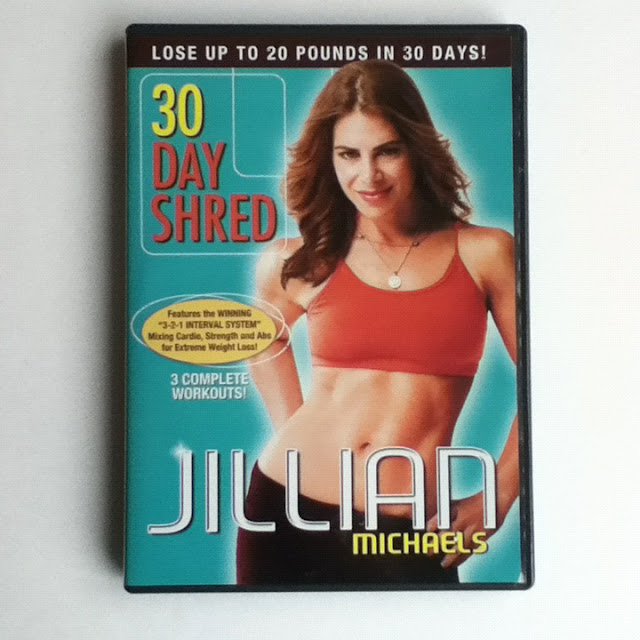 By Miss Jillian here. After day 1 my entire body was sore. Everywhere. I couldn't move or sit still without being sore somewhere. The combination of strength training, cardio, and abs all crammed into 20 minutes is both genius and excruciating. And that's just on Level 1 with 3 pound weights. Ha! But I will also say that today I did it for the 5th time and I can already tell that I'm getting ever so slightly better at it. And I already have a six pack.

Okay, that part about having a six pack is not true at all. But I am getting to be less of a wimp about the sissy knee push-ups and stuff. And now when I try and flex my abs I am actually starting to be able to tell that there are indeed abs there to flex. I may be failing at most of my goals these days, but I am very proud of myself for finally getting on track with doing some good exercise with strength training in it. After all, "I could always use a good chest fly in my life."

Anyway, I borrowed this DVD from my nice friend (who was super pregnant and has since had her cute baby, but still wasn't about to be hanging out with Jillian yet) and then, after doing the workout a few times, I went ahead and ordered it from Amazon. It was recommended to me by several friends and, at least so far, I would definitely recommend it too. I've done a few other exercise DVDs before and there are a couple of reasons I like this one more than the other ones I've tried.


These three things alone make it a major win for me. Add in the fact that I can definitely feel that it's making a difference and the entertainment in watching her touch that other lady's belly button while she does sit ups and, really, how could you possibly life without it? Not that I'm out to sell it or anything. I just feel like everyone should be aware of a good awkward belly button touch, you know? Oh, and a good workout. Hopefully by next month I'll have abs like what's her face in the back row. I'll let you know.
Posted by Katie Lewis at 12:49 AM

I'm totally with you on the 30 Day Shred...every morning, Riker wakes me up by chanting "It's time to do your exercises!". He's seriously the best workout buddy. This isn't my first time doing this workout, but it still kicks my butt. I'm 7 days into it and my endurance is definitely up. But I will say that I have muted Jillian and listen to my own music now...I can only hear "Stop phoning it in at the gym" so many times before I go crazy. But I've never noticed the awkward belly button touch, so perhaps tomorrow I will pay more attention! Good luck!

Ok, I'm convinced. I've been totally off-task with exercise lately. Partly it's my physical therapist's fault - I'm getting some PT on my wrist after I sprained it last summer when I tripped and fell on the Handcart Trek - she said to lay off the weights for now. I was only too glad to oblige. But the wrist is almost healed, and workouts with 3-lb weights should be well within the "doable" range. I think I can manage 20 minutes.

So glad things are better with you and your best little buddy.

Gosh I'm so glad you're doing the shred too. We just started a biggest loser competition at work last week, and I really wasn't that into it, but then I bought some slim fast shakes, and started writing my weight watchers points down again, and I thought that should be enough, but Adam every morning pushes me out of bed and says I need to do my workout. Oh Jillian. I hate her. And I love her. Glad we convinced you :) And now we can comisserate together....maybe I'll make it to the 3rd level this time....probably not.

Ah...what's her face in the back row. Why does she smile so hugely throughout the whole workout?

I love the SHRED! It's a great one to start out with. I've moved into the next level of pain with Jillian--Ripped in 30. When you are done with the Shred you should look into that one!