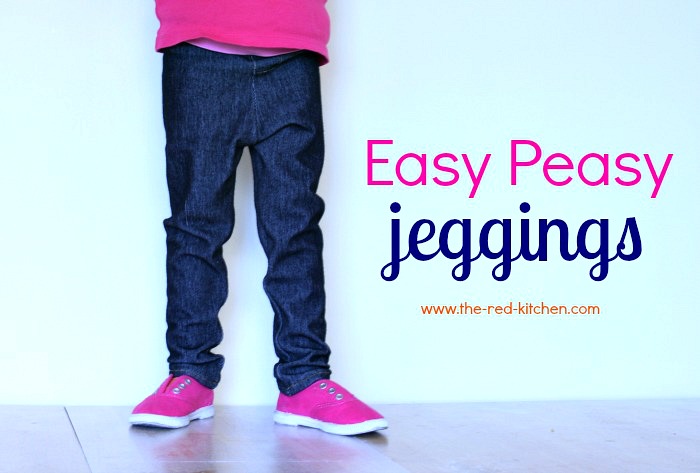 Hello day two of the KCWC! I used up my precious preschool time writing the Easiest Leggings Ever post because I knew that as soon as I moved on to the next project I wasn't going to care about those cute little gray leggings anymore. Seriously, guys, you have no idea how many beautiful finished and photographed projects you will never see simply because I moved on to the next thing too soon and lost all my enthusiasm for actually writing the post. Lame, but true. After I finished my homework (i.e. wrote the post) I rewarded myself by moving on to the next project.

Well, not really. The next project on my list was going to be another pair of skinnies--exactly like the green skinnies, but made from one of my old pairs of skinny jeans that has a hole in an (ahem) awkward place. I even re-drafted the pattern to help fix my mistakes from yesterday, but when I went to cut the pieces I realized that my old jeans weren't wide enough to cut 4 little pant legs from. I was a little bummed by this, but mostly very happy to know that my legs are too skinny for something. Sah-weet!

So, naturally, I moved on to jeggings. 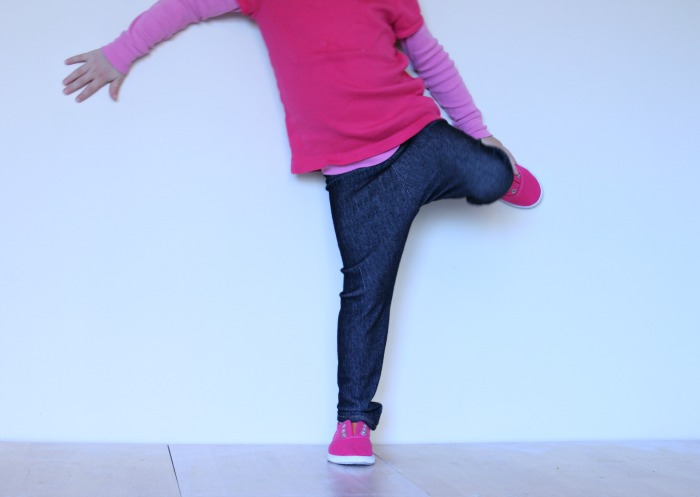 A few weeks ago I was perusing my favorite spot at Joann's (i.e. ye olde remnant bin) and came across this hideous stretchy fake denim. I was there with my friend and teased her that she should buy it and make herself some jeggings with it. We both turned up our noses at the gross, ugly fabric, laughed heartily at the idea, and then left with our other purchases, leaving the icky jeggings fabric behind.

Fast forward a week or so later to when I again found myself back at Joann's rummaging through the remnant bin and, yet again, came across the icky jeggings fabric. I was there with a different friend this time, made the same lame joke about how she should make herself some jeggings, we laughed again, and then she went to look at ribbon. And that's when it hit me. I should buy the icky jeggings fabric and make some for Olivia! And so I did. 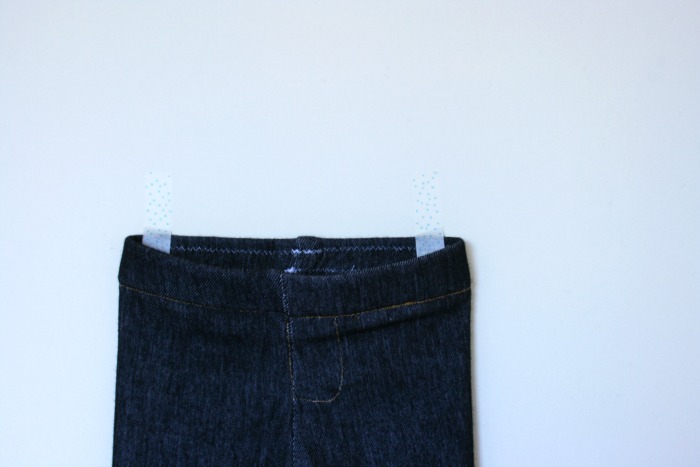 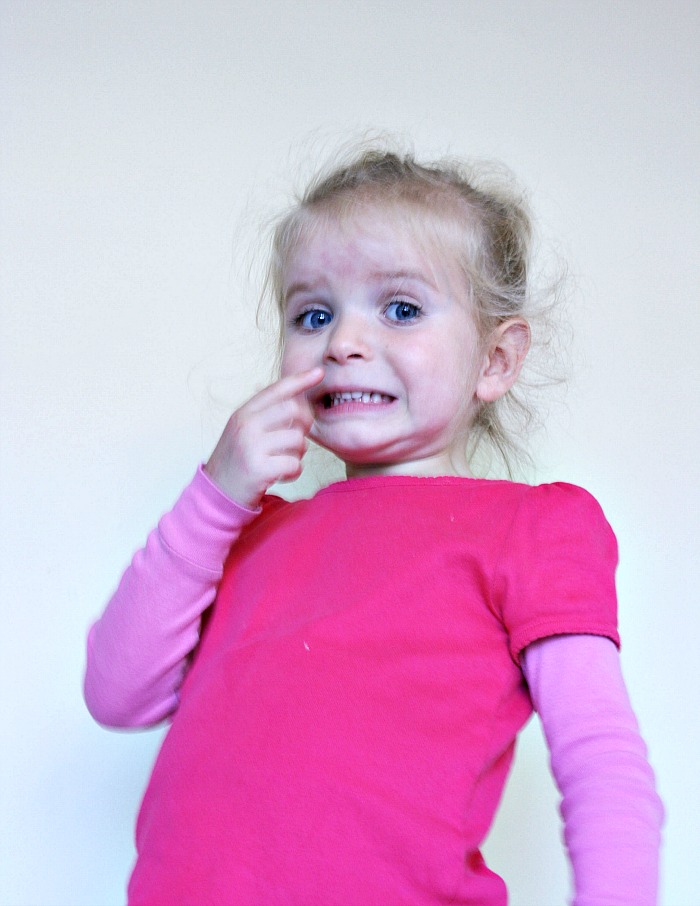 Click below for a basic run-down on how I made them. And Olivia's sweet boogie*.

*Her dance moves, I mean, not the one it looks like she's about to pick out of her nose. 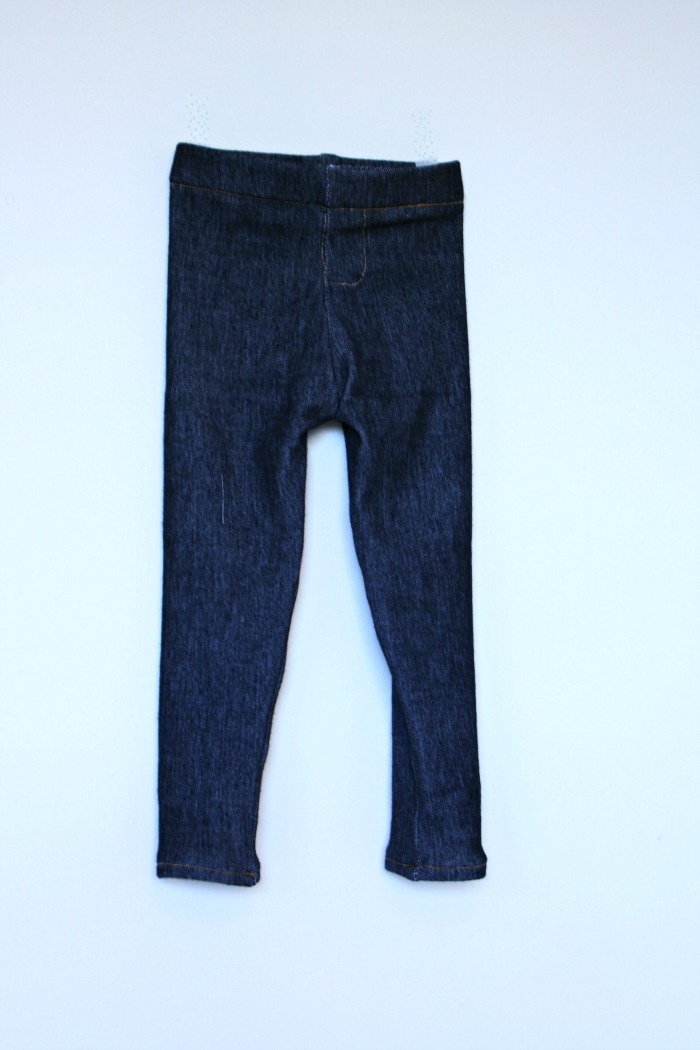 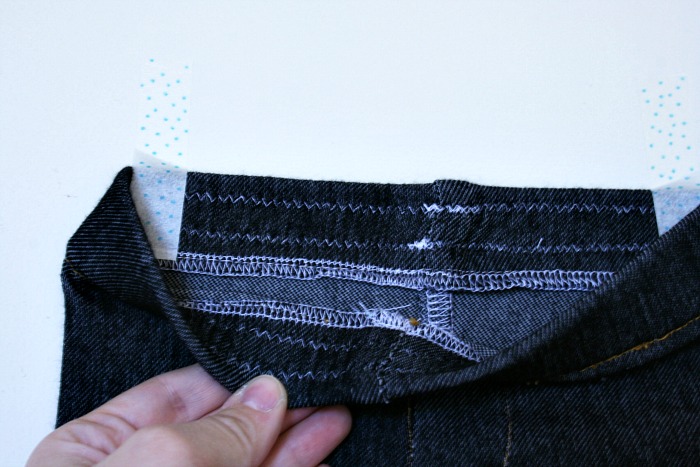 For the waistband, I followed some excellent instructions my sister gave to me over the phone for how to do sewn-in elastic. It worked like a dream and was so much more successful than my failed attempts yesterday. Thanks Polly! 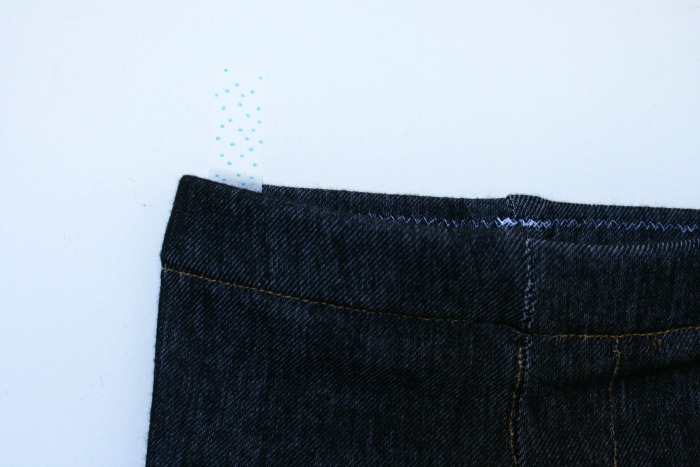 Once the elastic was sewn in, I folded the waistband over about another 1". To sew it shut, I changed to a long straight stitch (it's a stitch length of 4 on my machine, as opposed to 2 which is my regular) and stretched out the fabric as I sewed. It was a bit of a risky experiment, but I am happy to say that it worked!

It makes the pants look slightly more polished (and more like real jeans) than a zigzag stitch would have done and because the fabric was stretched while being sewn with such a long stitch, the finished waist still stretches just as much as it did before I sewed this straight seam all the way around it. Awesome, no? 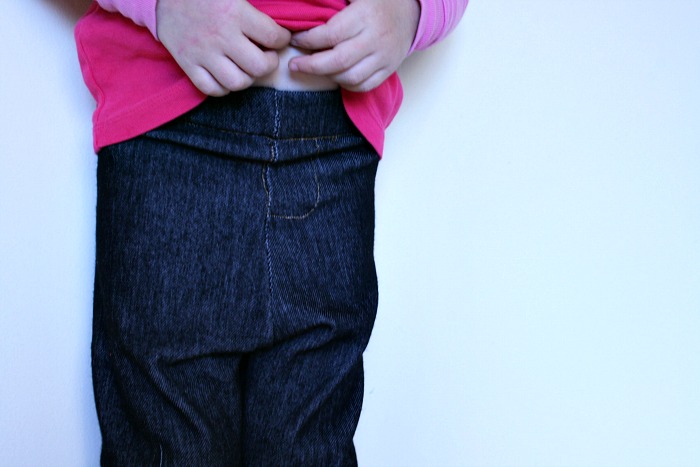 Like with the green skinnies, for all of the surface stitching on these pants I used jeans thread (more on that at the end of the green skinnies post) for the top thread and regular white thread for the bobbin thread. My machine was a little cranky about that thread combo with this wacko fabric, but in the end it remembered who's boss (ahem, me) and it all turned out beautifully. 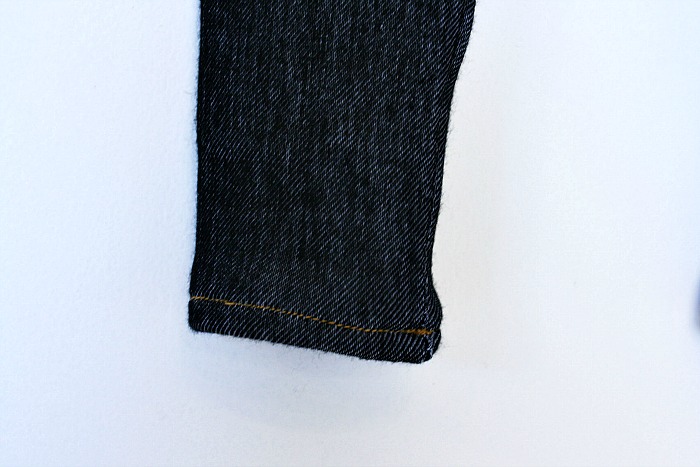 Especially since the only times this was an issue was when I was sewing the waistband shut, sewing the fake fly, and sewing the bottom hems. All the other sewing I just did with regular thread which made both myself and my machine much happier. We're kind of plain old white thread junkies, my machine and me.

And how does Olivia feel about these comfy, rockin' little pants? 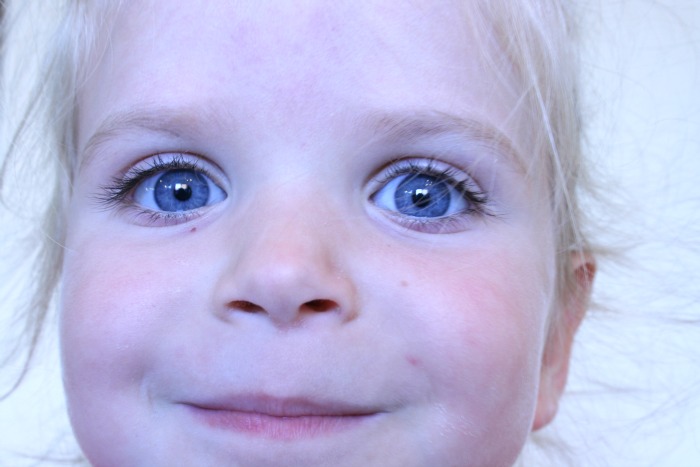 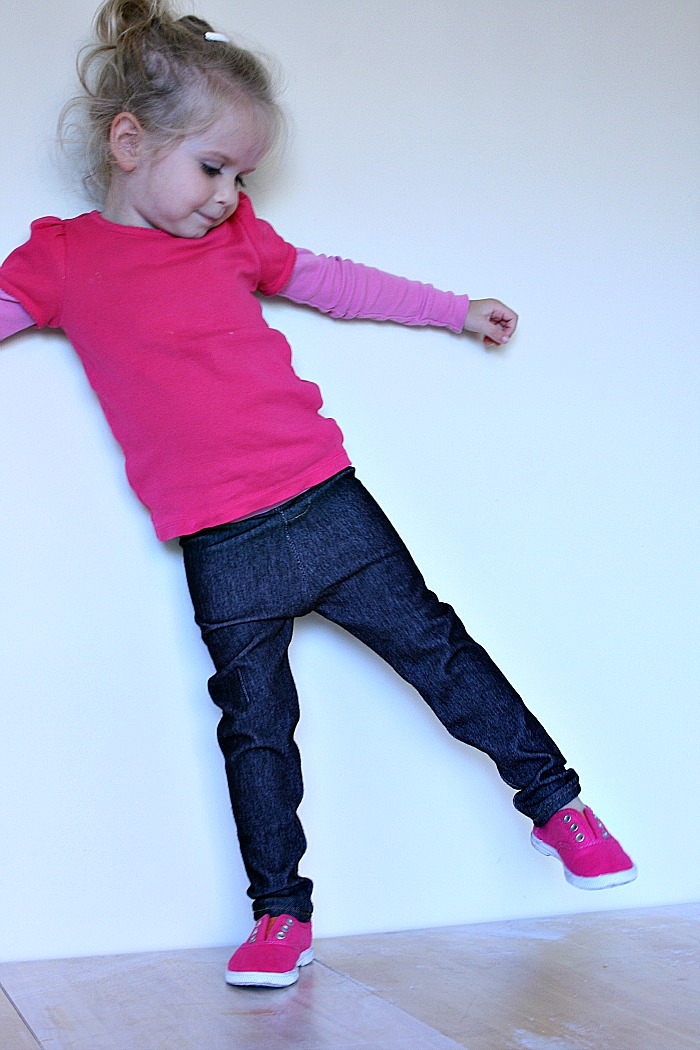 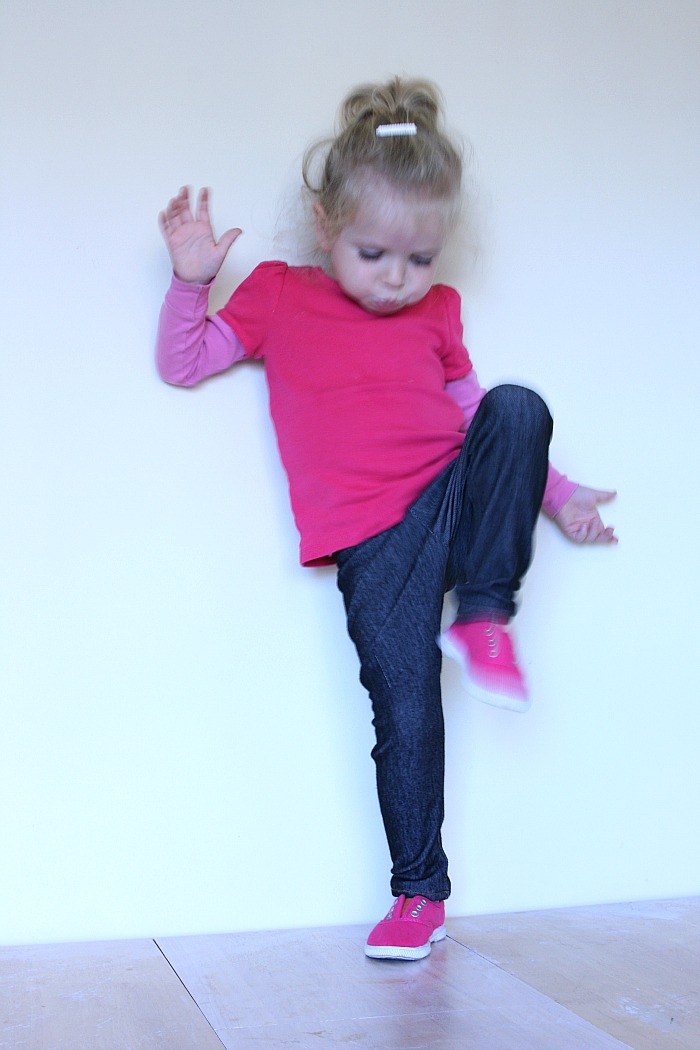 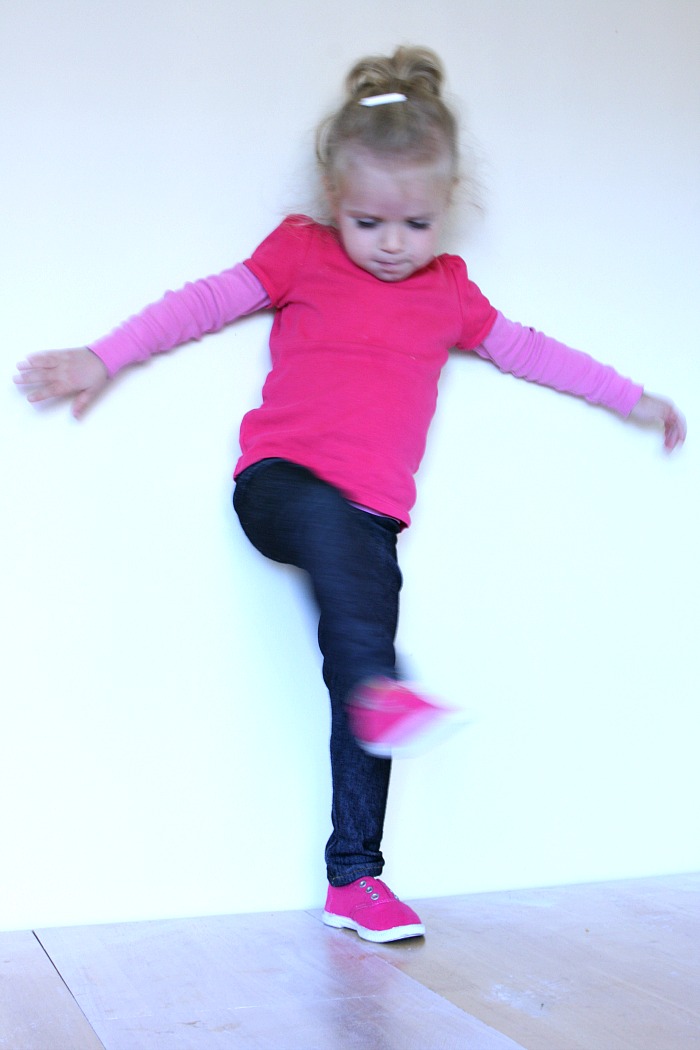 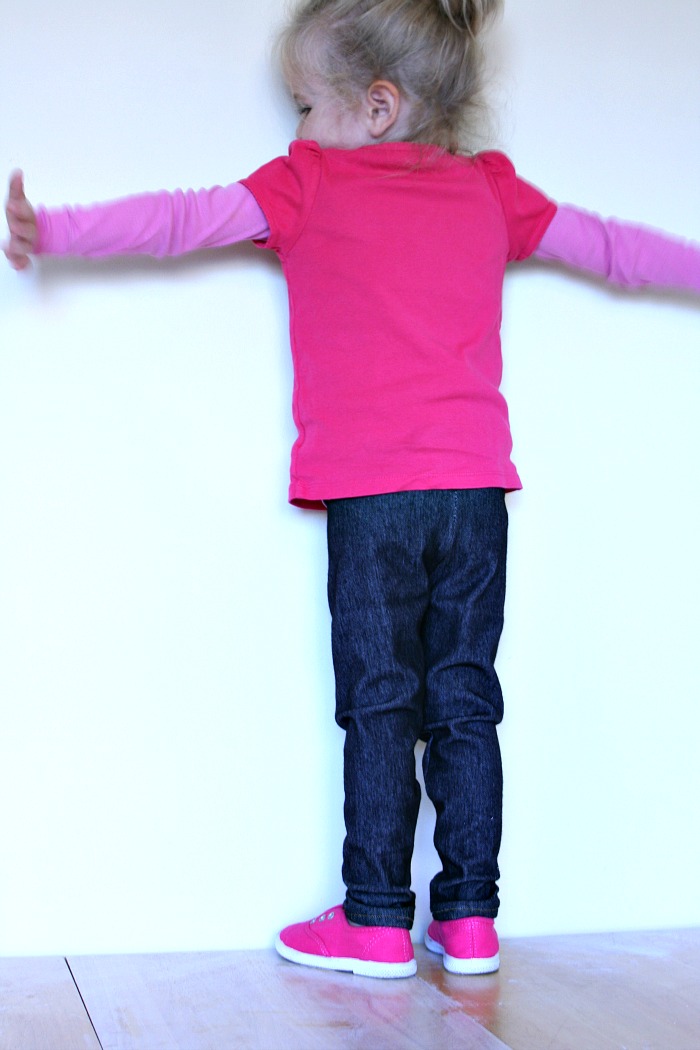 Oh, and I had every intention of adding back pockets to these, just like the ones on the green skinnies, but there wasn't enough fabric, so I skipped 'em. I do think some back pockets would have made these look more like jeans and less like leggings, but oh well. They are jeggings after all, so it's okay for them to be a little bit one and a little bit the other, right? 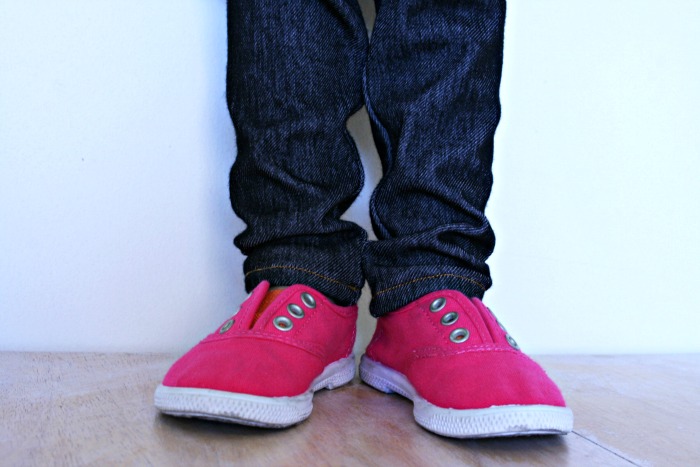 Well, that's it for these simple, easy, and totally rockin' little pants! I sure am having a blast sewing things up for KCWC this time around! And it's so fun to take a break from book projects and work on things I can actually share with you guys! I love love mega love the things I'm working on for the book, but it kills me to have to keep all that goodness to myself for the time being. One of my favorite things about blogging and creating is sharing the things I make with you guys. I totally miss that. It's fun to be back!
Posted by Katie Lewis at 7:53 PM

what a wonderful birthday present!! she looks darling in those pants, i want some! also, she has such a cute petite bum. love it.

i love these! look so good with the jean thread.

ps: you know you want some too.
pps: nora keeps saying "blue tutu nora want blue tutu"
ppps: where did you get olivia's sweet shoes? i saw adult ones just like them at old navy but didn't see any in the kid's (maybe because i only looked in babies because neenee has baby feet still).
pppps: nora is saying "hi olivia" now. they need to meet!!!

These are DARLING! So adorable. They fit her great! I found you through KCWC.

I'd love for you to link this up to WKWW-What Kids Wore Wednesday Link Party this week at ONE little MOMMA.

Ha! I saw the washi tape in one of the photos. Love Lala's pink shoes. I used to have some almost that same color. Darling jeggings. Remember when I asked you what they are?