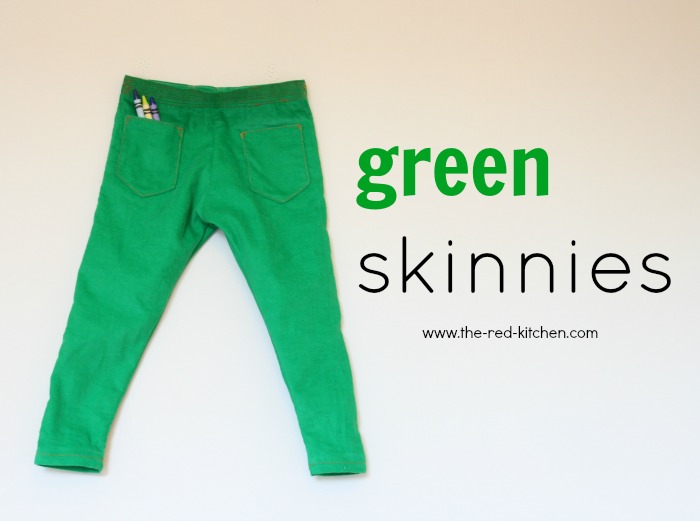 For day one of the Kids Clothes Week Challenge (a.k.a. kcwc) I made Olivia some sweet little green skinnies. For picture-taking purposes, I decided to hang them up on the wall since this is really the best-lit place in our badly-lit house. I wanted to hang them up with some pretty washi tape, but I don't own any. I know. How can I be a craft/sewing blogger and not own washi tape? I don't know. I guess I'm just too cheap. Hence the reason for it being on my Christmas list instead of being in my house.

Anyway, I still needed these little pants on the wall, so I grabbed a Sharpie and some plain old masking tape and made do. In the end, the tape got washed out in most of the pictures, making the pants look like they're mysteriously floating on the wall. Oh well. A for effort.

Side note: Bryan came down when I was editing this picture and said, "Oh, did you make your own wasabi tape?" Hahaha. Yes honey. 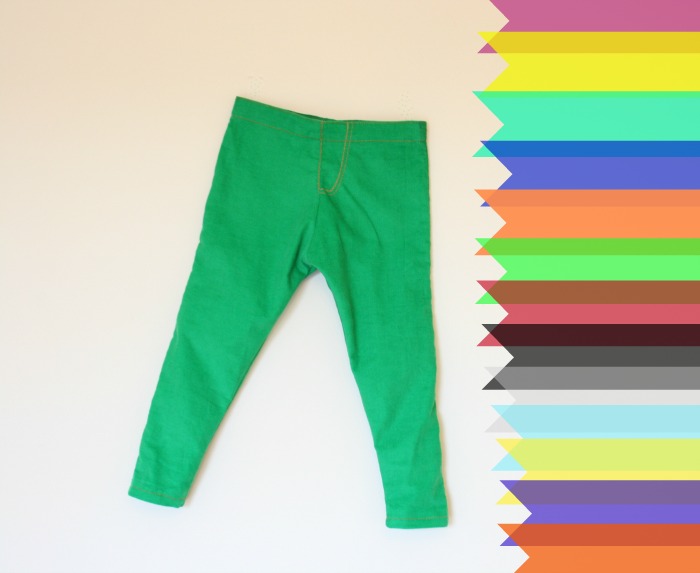 Despite some minor glitches along the way, I really love the way these sweet little pants turned out. And Olivia totally rocks the skinnies. There might be at least two other pairs of skinnies on my kcwc sewing list. We shall see.

You'll find all the details on these rad little pants and proof that they fit Olivia after the jump. :) 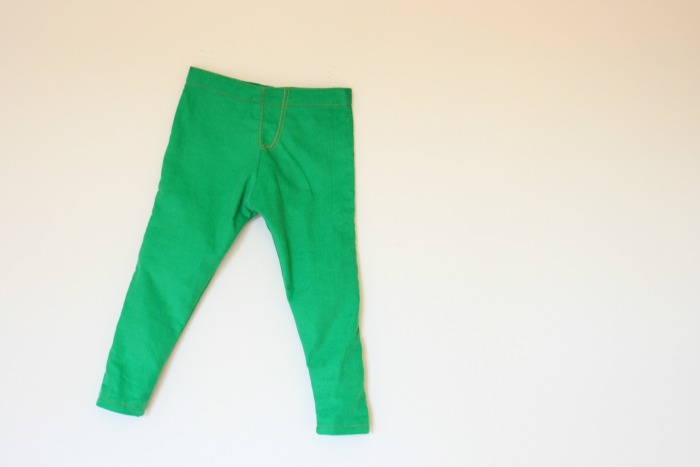 To make these pants, I started by tracing Dana's Basic Kid Pants pattern (thanks Dana!) and then making some alterations. Some of the alterations included: 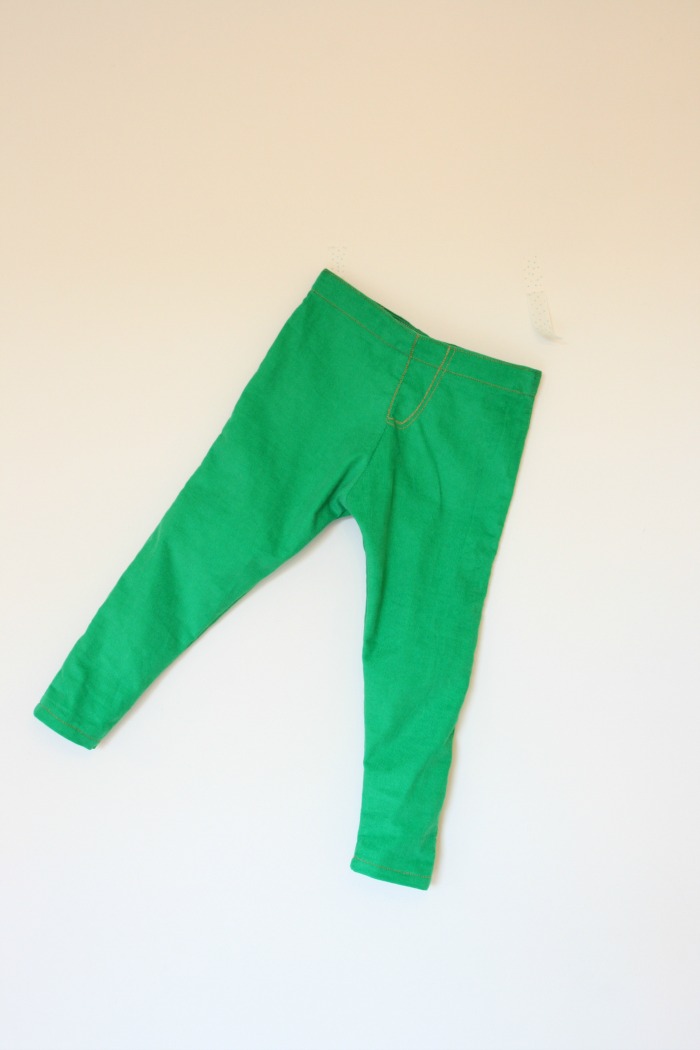 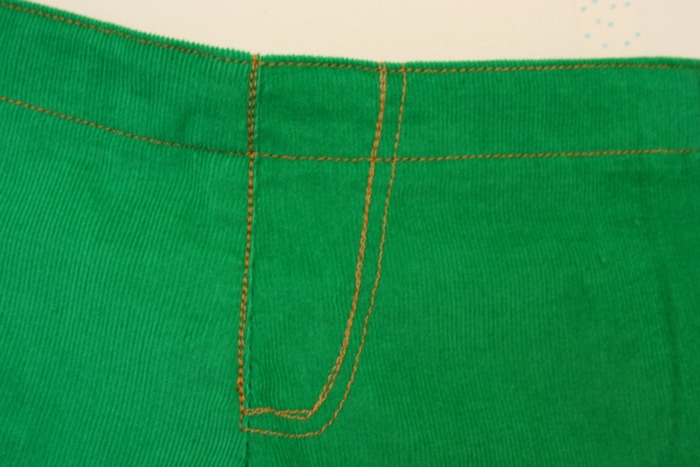 Here's a mish-mash step-by-step on how I made the fake fly:


If, like me, you totally mess up your J on the first try, just pretend like you meant to do it and sew another one to distract people from your unfortunate stitching. Then remember it's going to be covered up by the kid's shirt anyway. Whatevs, fake fly. 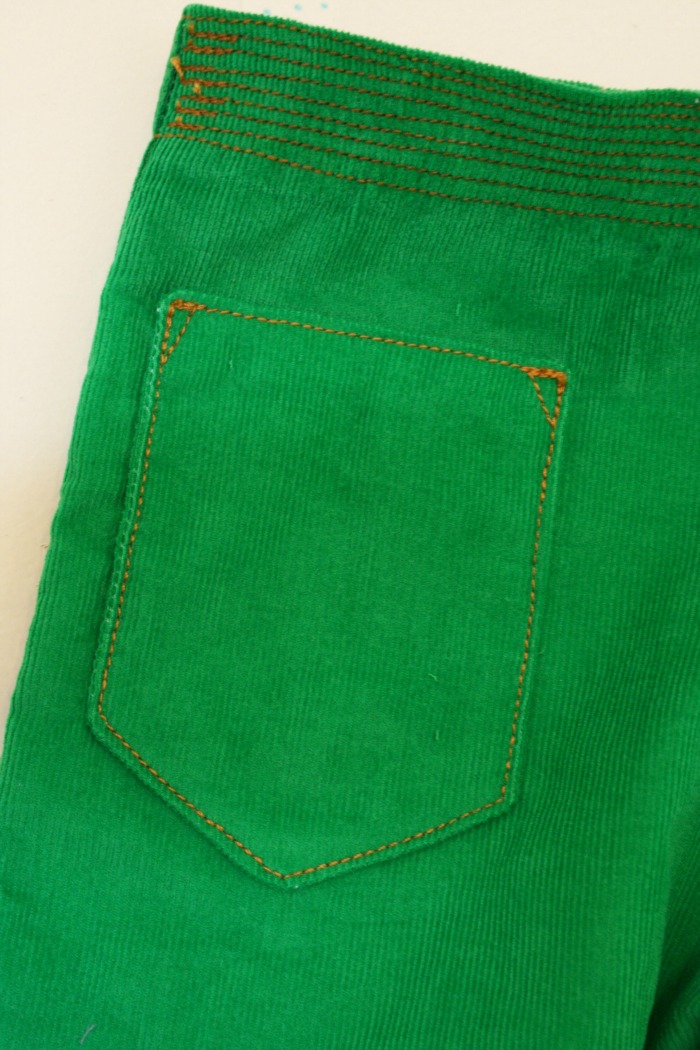 The back pockets are one of my favorite details on these pants and they were truly so easy to make. Just cut 2, sew them together (right sides together), turn them right side out and press, edgestitch across the top, and then sew onto the pants 1/8" away from the edge of the pocket.

If you want to get really fancy, sew the little triangles at the top of the pockets. 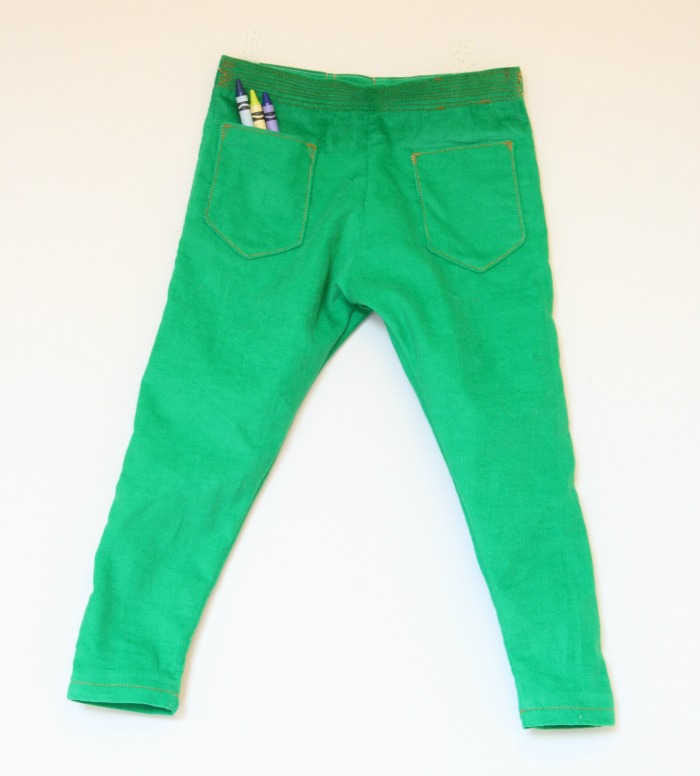 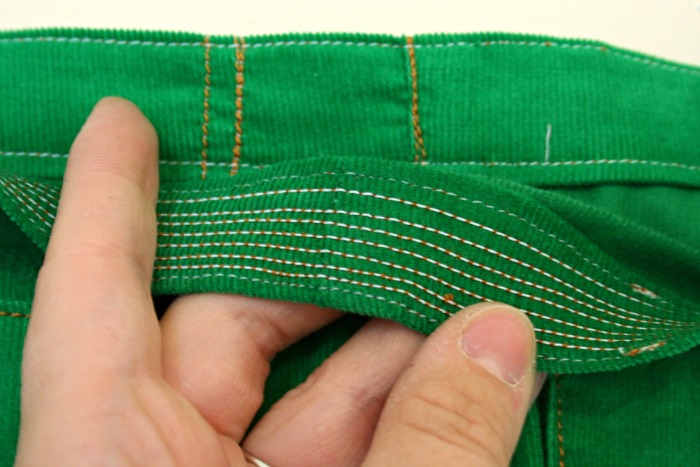 I had initially planned on adding elastic to the waist just at the back, but then I realized too late that the only elastic I had on hand was the wrong size. So I winged it and instead decided to sew a bunch of rows of shirring (sewing with elastic thread).

I love the look but... it totally don't work. I think the double layer of corduroy was just too much for the little elastic thread to handle. After spraying them with lots of water and ironing them with a really hot iron, these little rows of shirring didn't budge. Boo. Then, just as I was attempting to sew some elastic straight to the back of the pants (on the inside), I bent the needle on my sewing machine. Double boo. Olivia and I went to the store for more needles, but by then I was kind of D.O.N.E. with these pants. 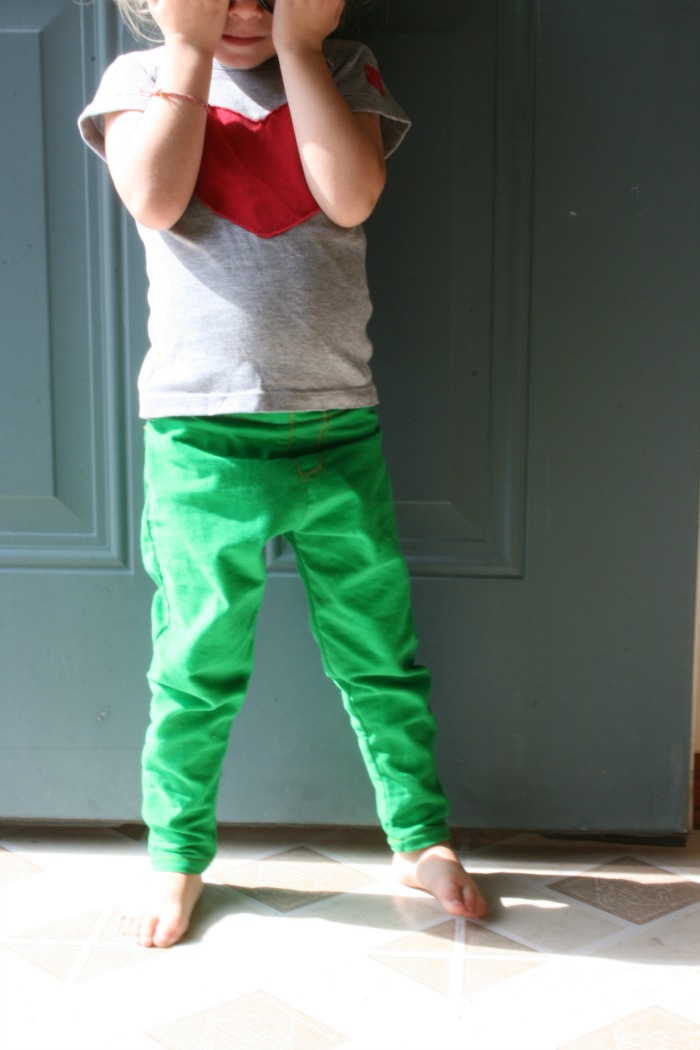 They totally fit her anyway! 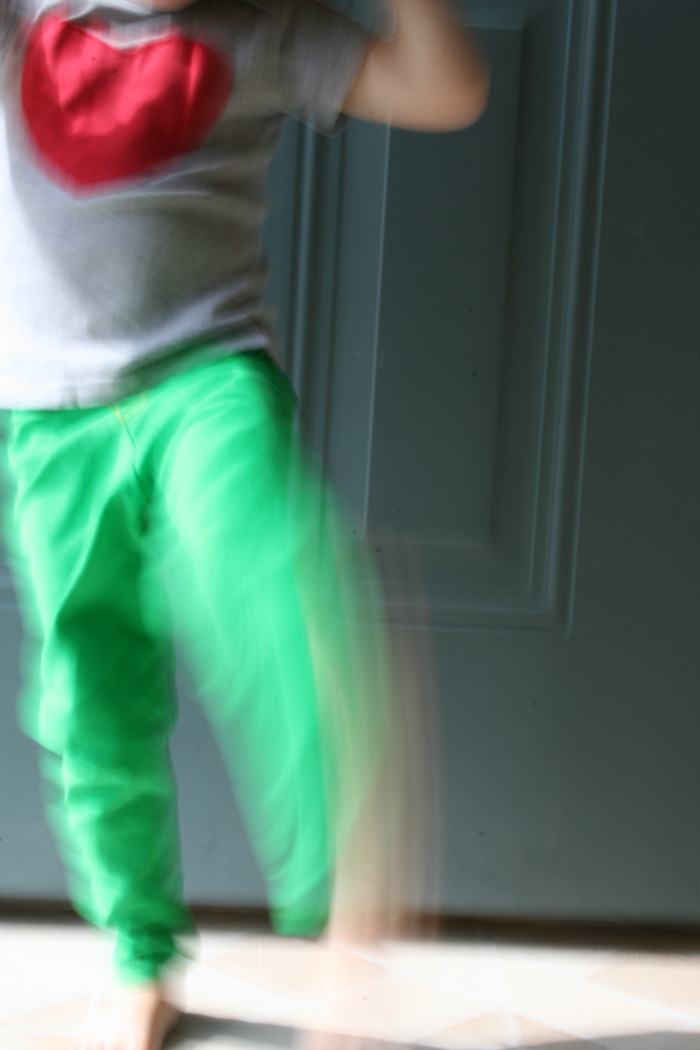 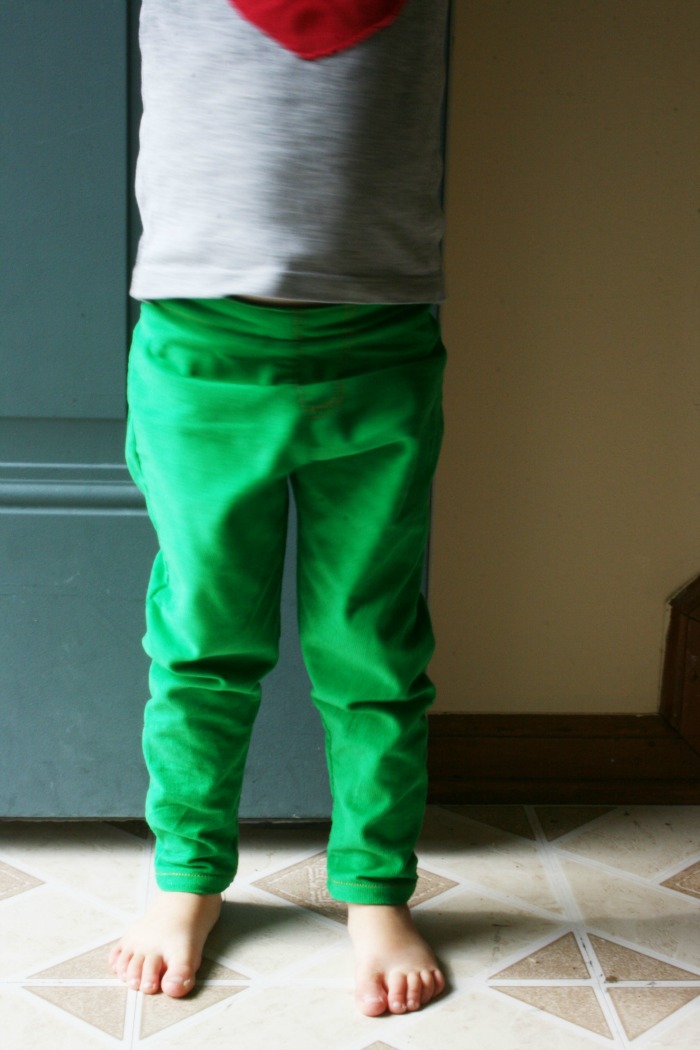 In the end, my wonky attempt at fitting these pants to her worked in our favor. Rather than having a zipper or elastic or something, she pulls them up and... they just kind of stay there. 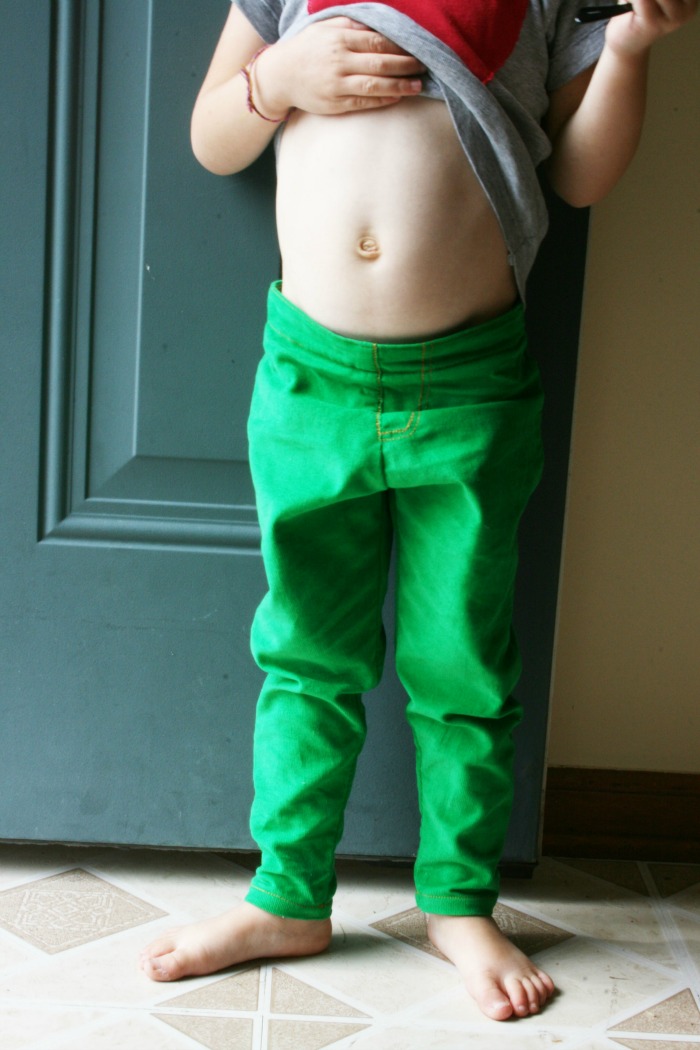 They are a little loose on this skinny girl of mine, but, then, so is everything. Admittedly, I saw her holding them up in the back when she was out running around with her friends this afternoon, but I don't really care too much. 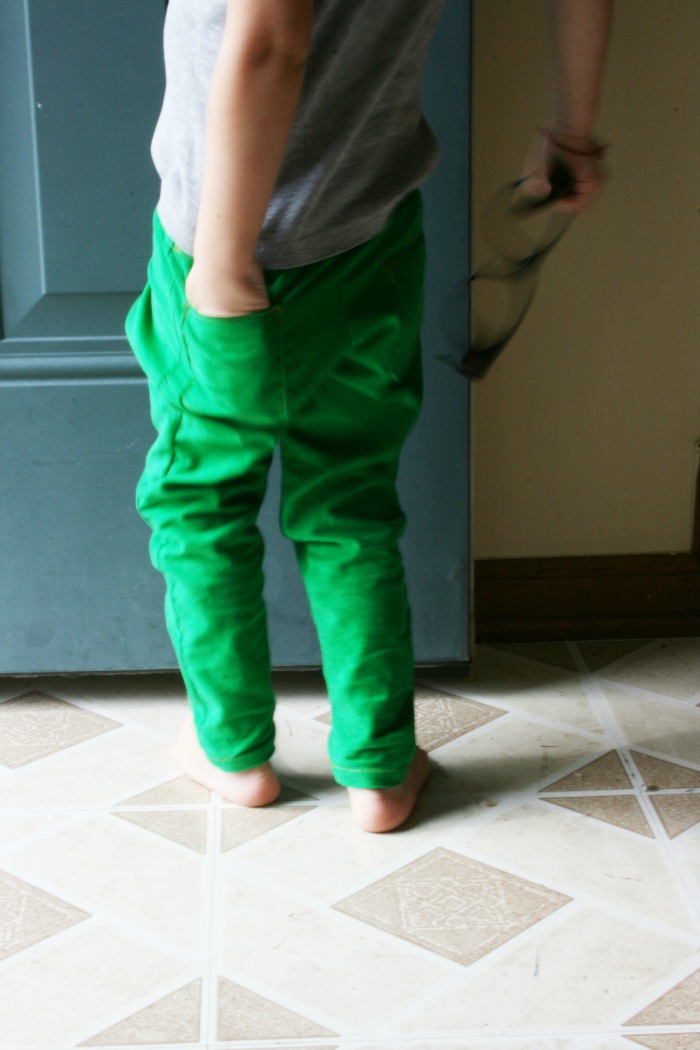 Taking advantage of those sweet pockets... 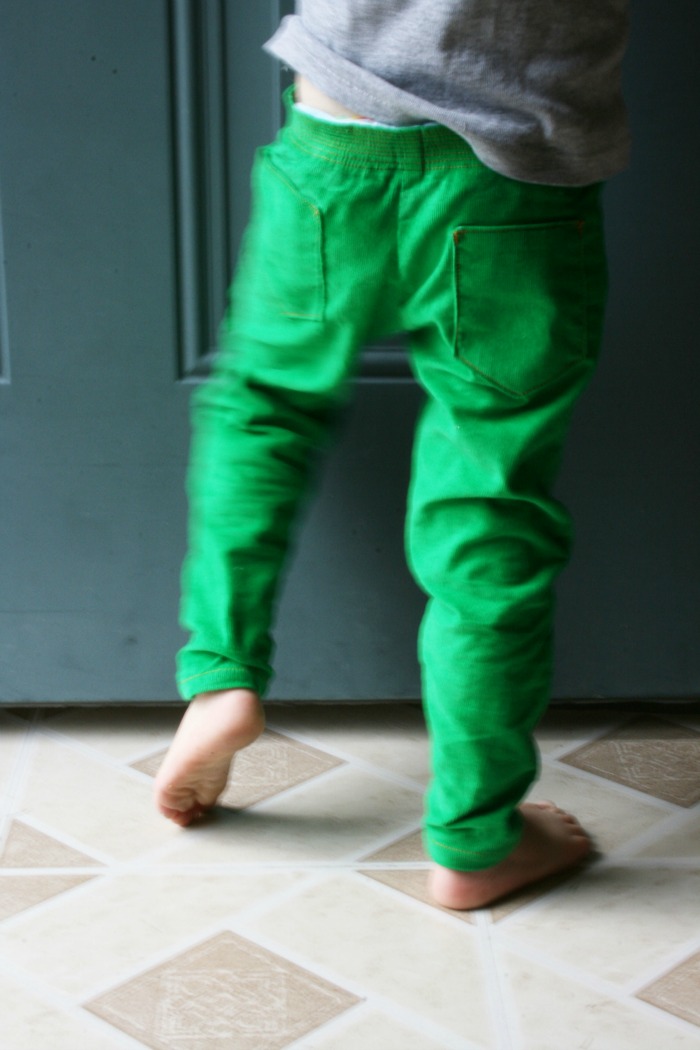 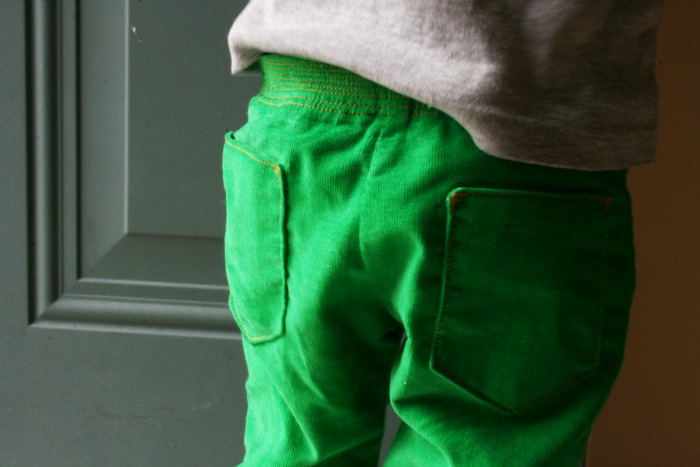 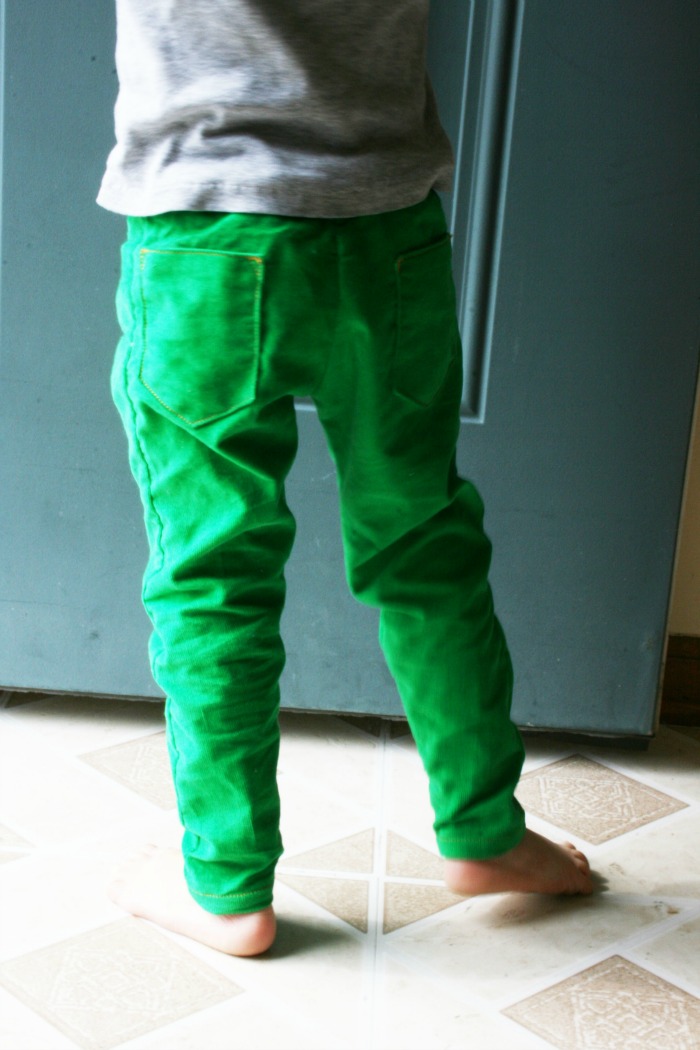 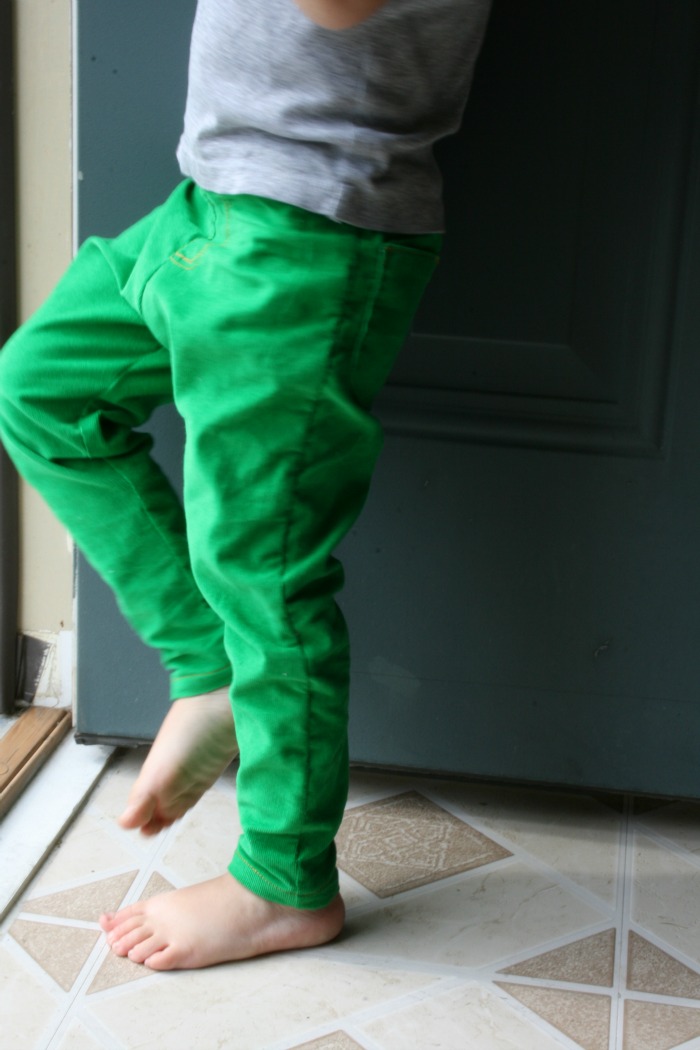 I kind of can't get enough of these tiny little feet. They're not as tiny as they used to be, but they still melt my heart. She's getting so big, but in so many ways she's still my sweet, tiny girl. 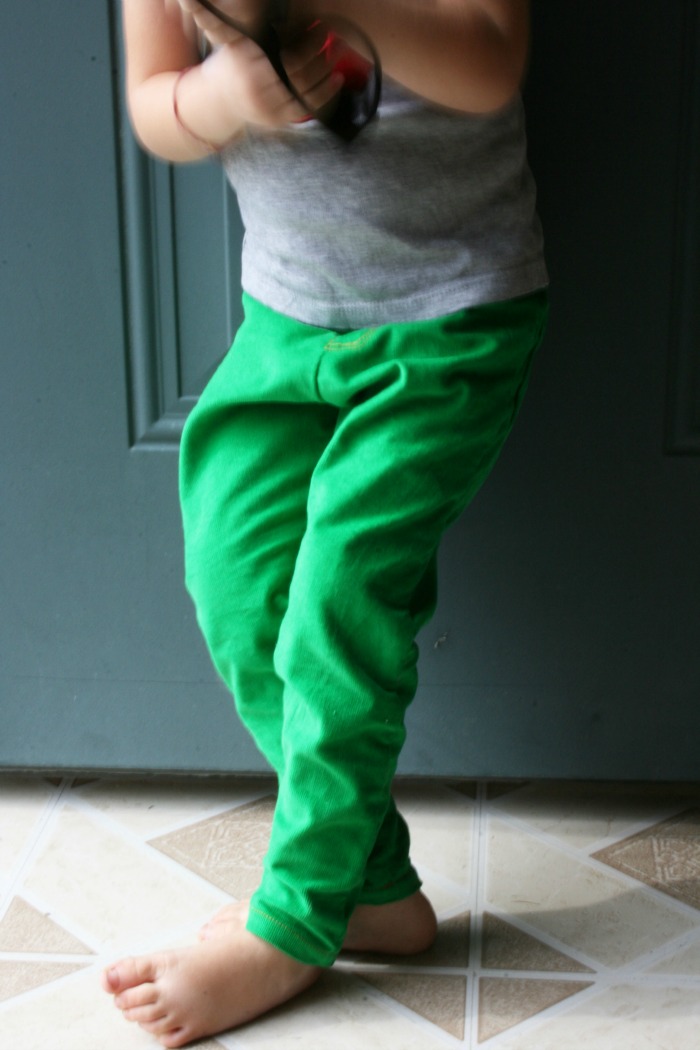 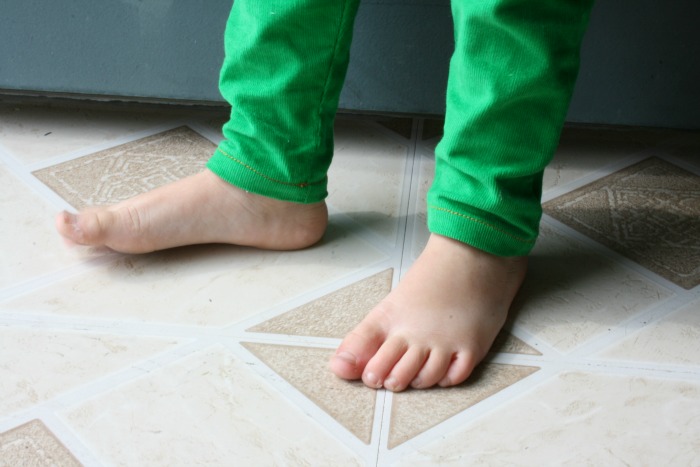 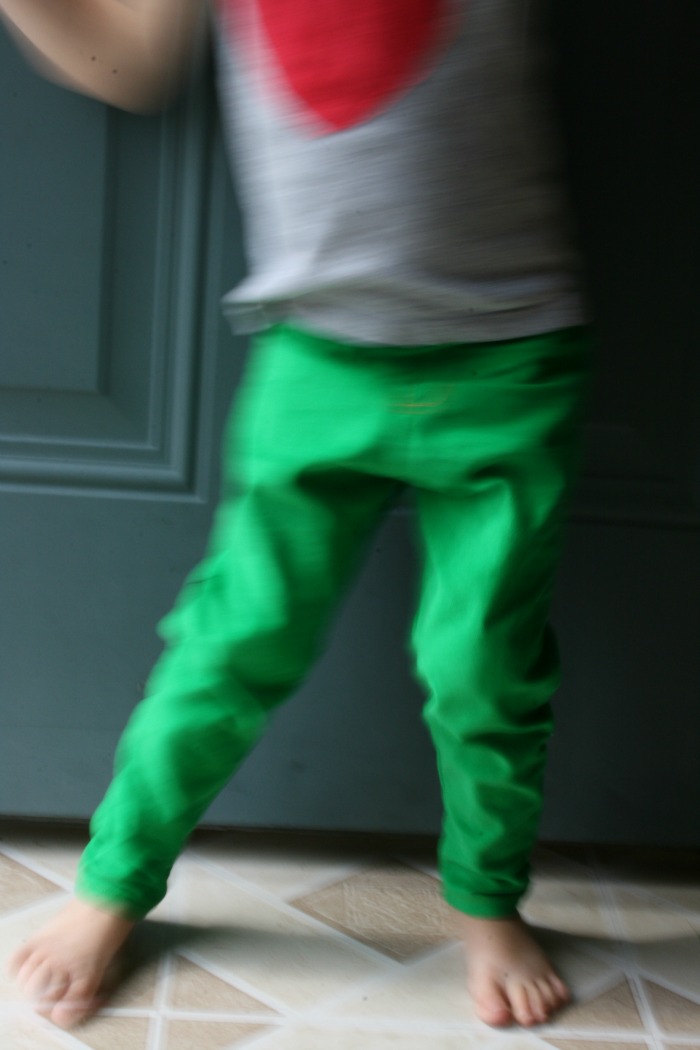 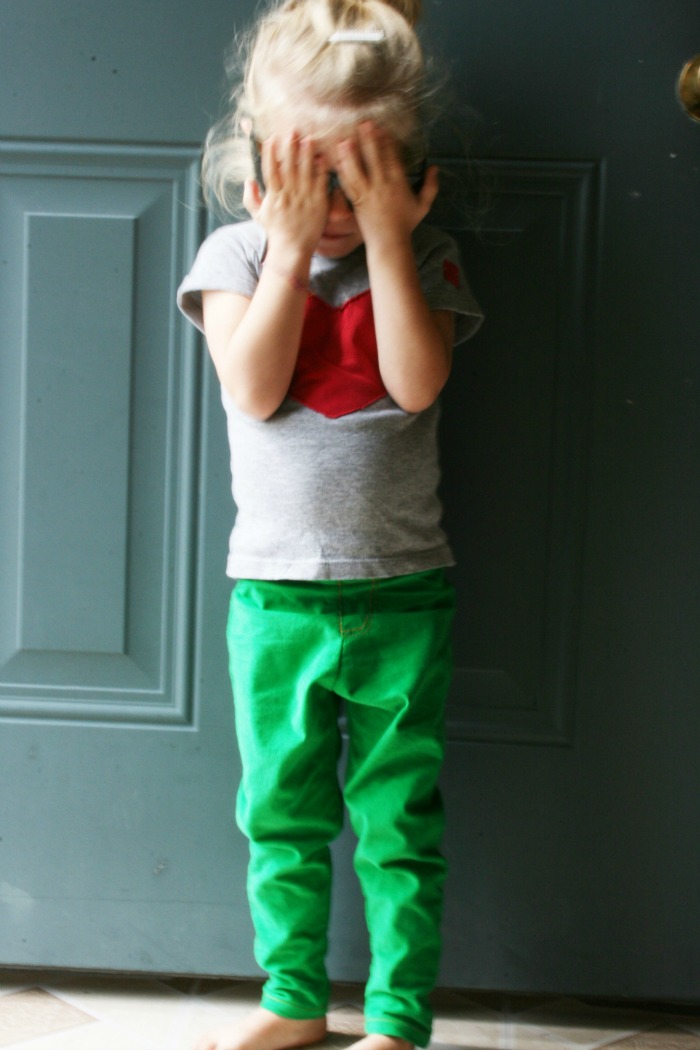 Three things I forgot to mention:

First of all, Olivia paired her fresh green skinnies with this old favorite Heart Shirt. Yup, it still fits her.

Third of all, I think one of the smallest details on these pants that makes the biggest impact is the use of jeans thread. It's the same color as the thread on store-bought jeans and it gives these pants more of a professional, finished look. Definitely worth the $1.50 or however much the thread cost.

FYI, jeans thread is thicker than regular thread. It didn't run through my sewing machine quite as smoothly as my regular thread does, so rather than putting it on the bobbin as well as the top thread, I just used regular white thread in the bobbin and used the jeans thread on top. It made a few seams slightly more tricky, but I think the end result is definitely worth the bit of extra work. I'm always looking for details I can add to our handmade clothes to make them look that much more polished. Jeans thread is a definite win in that category.

Hooray for kcwc! What did you guys make today?

Nothing. Wish I had. I love seeing what everyone has created, but I never take the time to commit and actually finish a project.
They turned out adorable!

These are SOOOOOO cute! I am seriously impressed.

Super cute skinny jeans. Yay for a great project! And you know how much I love love love little feet.

PS - I hadn't heard of jeans thread before. Or washi tape. Thanks for the tips!

Man, Olivia has so much swag.

She looks cute. Great job on the pants. I noticed a while ago that most kids pants bought from a store have the elastic sewn in (rather than going through a loop.) Since then I've never gone back. It's really easy and fast.

Saturday I made three pairs of kids leggings before I remembered it was KCW. I've also made two onesies for Anson, decorated a tie for Eric... and now I'm off to make a pumpkin shirt with my Katie.

Love these! My boy, who is obsessed with green, might need some.
Jeans thread?! Love the tip. I'm going to try to find some tomorrow!

YAAAAY skinny jeans! Love these. Such a great combo: kelly green cord + skinny jeans. Your pocket placement is MUCH better than mine. I swore I had them lined up evenly, but apparently not. bah.

Ha! I love these, and your sewing style--winging things is right up my alley, too! If you wanted, you could probably add your too-wide/narrow elastic by putting a facing (of really thin cotton?) along the back waistband and use it for a casing? Or just leave them. Because they are rad.

Super impressive! I really like the jeans thread detail. Is it actually called jeans thread in the stores, or did you just find some that looked like what is used on jeans? Loved the wasabi tape comment, haha- I'm sure my husband wouldn't even get that close, I doubt he's even heard of washi tape ever.

I love these! I can't wait to try this out, thanks for sharing our alterations!