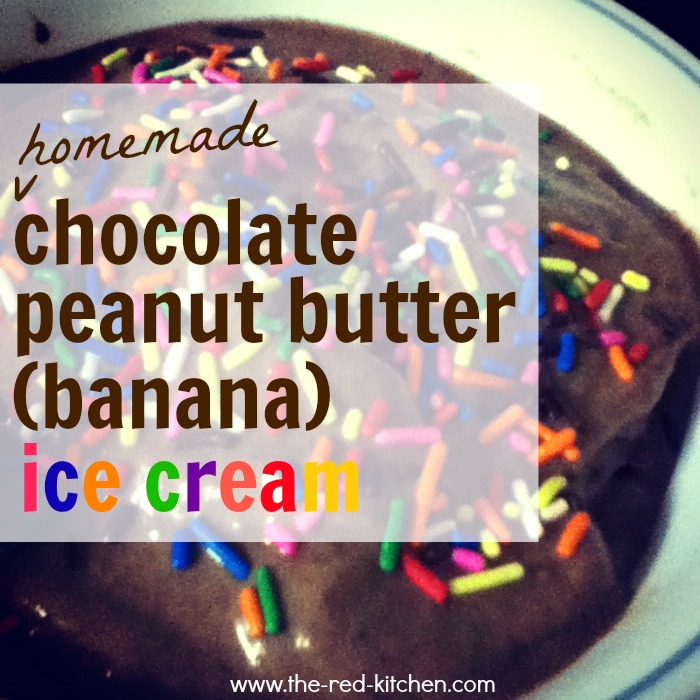 So, remember when Bryan and I were eating vegan? Yeah, we're not doing that anymore. It was too expensive and time consuming (and, let's be honest, too restricting for us) and we got burned out after a month or so. But even though we're not eating that way anymore, I'm still glad we tried it. And there are still a few things we started making during our vegan days that we still make now. My favorite? Banana ice cream.

I first learned about it here on The Londoner. Basically, it's "ice cream" you make in your blender and frozen bananas are the main ingredient, but ours tastes a heck of a lot more like chocolate peanut butter ice cream than bananas. (Or at least, to me it does. My sister was not as convinced, so I guess it's up for debate. But I am personally of the opinion that it tastes just plain delicious and entirely like chocolate peanut butter ice cream.)

Oh yeah, and did I mention it only uses 4 really normal ingredients? Yeah. It's time to make some. Like, right. now.

I didn't put actual amounts above because this is one of those things that differs each time and, honestly, it's hard to mess it up. So don't stress too much about exact measurements. What you'll want to focus on instead is the consistency.

Step 1: Cut & freeze bananas
Slice up several ripe bananas into a freezer Ziplock bag. I try and do thinner slices (think 3-4 quarters stacked on top of each other) so the banana will chop up easier in the blender.

I usually just chop my bananas up whenever they start looking a little past their prime. Basically, instead of mashing up my brown, speckle-y bananas and turning them into banana bread, I slice them up and freeze them to use in ice cream and smoothies now instead. Healthier and, by the way, way less time consuming.

Step 2: Blend bananas and milk
In the link I posted above, she says to just blend the bananas on their own. Maybe this would work well if you have a super mega million horse power blender (ahem, like my mother in law), but even our sweet-o Ninja blender is a lot more cooperative with a little liquid. And, just for the record, we were able to make this in our super cheap $6 blender too.

Okay, so now that your bananas are nice and frozen, add some to your blender. (Side note: The banana slices will stick together. It's okay.) Then add your milk.

Tonight when I made it I tried to eyeball about 1 banana worth of slices and then I added 1/2 cup 1% milk. This turned out to be perfect, consistency-wise. (And otherwise.)

Tonight when I made it I added 1 TBS of cocoa powder and 1 TBS of crunchy peanut butter and it turned out great.

Sometimes we add more cocoa powder or more peanut butter when we want a little more of one flavor or the other. But, fair warning, sometimes adding too much cocoa powder just makes it taste like cocoa powder instead of chocolate. Learned that the hard way. Also, I'm sure you could use creamy peanut butter if you prefer. We just like the way the crunchy peanut butter gives the ice cream a little crunch.

Yields:
1 big bowl of ice cream happiness
(minus the sugar and guilt)

And, for those of you who are interested, I entered it in to my calorie counter and the bowl (i.e. all of what I made tonight) came out to around 270 calories. Not bad, I say, not bad. (Especially compared to real ice cream.) And most of those calories are from the peanut butter. So if you're looking for a skinnier bowl of ice cream, just go chocolate. Or add berries instead of cocoa powder and make fruity ice cream. Or add something else that sounds good. It probably will be.

You can also, of course, just add more of everything and make a bigger batch. I only made a (rather generous) single serving for myself tonight, but usually I add a little more of everything and Bryan and I split a batch, each with a big helping. Of course, you could also be really prim and proper and split a batch 4 ways when you have friends over. We've done that too. Or you could split the batch up other ways. Probably you know how to do that kind of math.

Anyway, I love this stuff. It's totally a life saver on days when I'm craving sweets and treats. It hits the spot and makes me feel like I'm being naughty and indulging, but it's really just like eating a big bowl of fruit. Huzzah!

P.S. I haven't tried it yet, but this recipe for easy, healthy, homemade magic shell looks pretty good too.
Posted by Katie Lewis at 9:19 PM

that looks pretty dang delicious. and i must say, even though i am number one all chocolate all the time, my favorite banana ice cream mix is 50/50 banana and frozen blueberry. the bessst.

also, you basically never make typos in your blog and i really hope that "lice cream" is not a typo, because it makes me really happy. lice cream lice cream!

and homemade magic shell is yes magical and gooodies.

don't forget that you are my favorite and thinking about you my dearest makes me want to walk all through the night to see you but i would probably only get to the other side of albuquerque if i did that. *siiigh*

Aghh! I am mortified. Lice cream = eew eew eew. I have already fixed the typo, so hopefully no one else will know what you're talking about. (As usual.)

Also, if you're going to go on a walk that long, please be sure to wear your moccasins. I wouldn't have it any other way.