I could really go for some sweet potatoes right now

I've literally been sitting here at the computer for the past five or ten minutes, staring at the screen, trying to think of something witty or uplifting or interesting or cool to say, but the truth is, I am too hungry to think of anything interesting. So there.

The health challenge is doing me nothing but good. And, even though I've been a champ about not eating anything after 9 pm, I honestly haven't even been hungry because of it. Win-win, eh? Except tonight. Tonight I am HUNGRY.

I've been using MyFitnessPal to track my calories and, in case you haven't heard me say it before, I love MyFitnessPal. I don't love tracking calories, but whatevs. When I lost a bunch of weight a couple years ago (curse the holiday season for ruining that) I used MyFitnessPal on my regular computer, which was really good, but I love it even more on my iPod. Mainly because that means I don't have to go down to the computer ever time I want to enter something in. Also because, with the (free) app, I can scan bar codes and it automatically uploads the nutritional info for me. So awesome.

Anyway, I've been tracking calories and stuff. And most days I totally come out ahead, partly because I exercise in the evenings and then don't eat anything after I've exercised. (I do drink a boatload of water though. Or perhaps enough water to capsize a boat.) Today I came out ahead again and, if I was eating after 9 pm, I would totally be eating something right now. But instead I'm blathering on about how I'm hungry. Fun, no?

In other I'm-trying-to-be-healthy news, I bought a pomegranate yesterday, finished it off this morning, and already bought two more this evening. The two I bought this evening were huge. Here's proof: 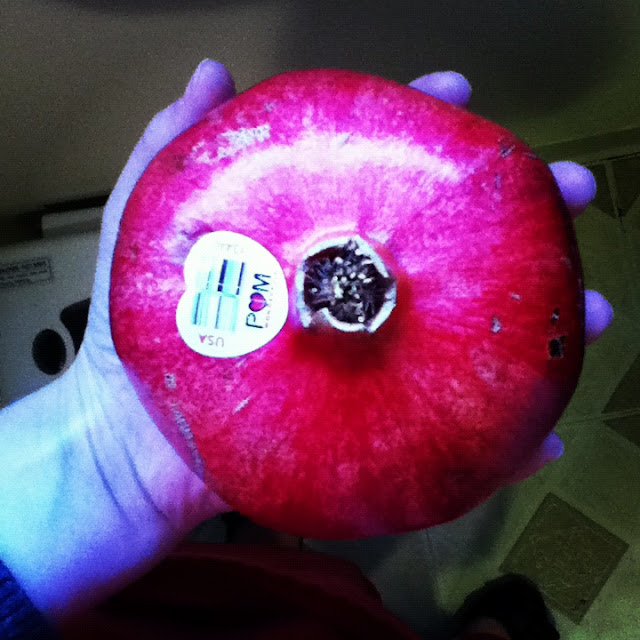 See? Big. Bigger-than-my-hand kind of big. So big that the contents of both pomegranates filled up an entire quart sized mason jar and then some. Also, these babies are mighty tasty. I kind of can't get enough of the juicy, pop-crunch that is pomegranate. Mmm. So fresh tasting.

Since I'm supposed to get at least 2 servings of fruit and 3 servings of veggies each day and I'm trying my best to not go over on calories, the obvious solution has been to fill up on fruits and veggies instead of other stuff. Which is good. But a girl can only eat so many apples and cucumbers and stuff. Hence the recent obsession with pomegranates.

And sweet potatoes. I bought some yesterday and I've kind of been fantasizing about eating them ever since 9:01 pm this evening. That and the spaghetti squash I bought. You had better believe we're eating those babies up for dinner tomorrow.

Anyway, I have to go and stop talking about food now. There was already so much amazing-looking food in Gilmore Girls tonight and it almost killed me. Talking about it was a bad idea. So the end. 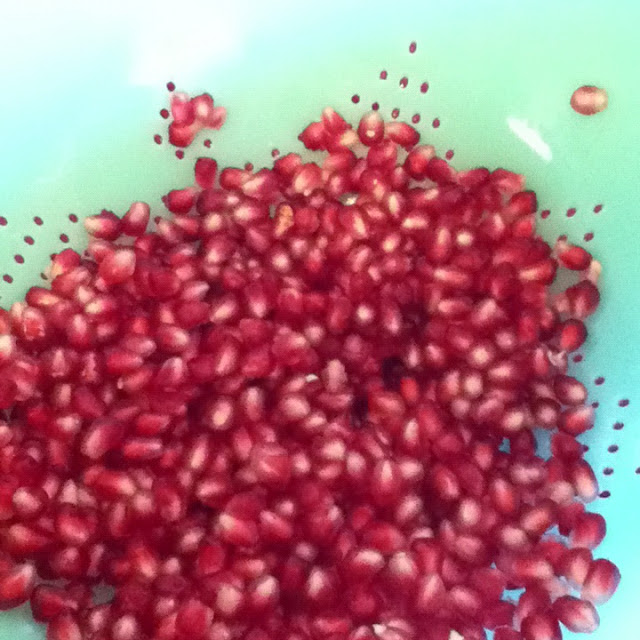 P.S. Thanks for all the recommendations of shows to get hooked on! I'll have to let you know what my next addiction is when the time comes. :)

I hate it when the craving kicks in right at 9:01.

Hahahaha - the sweet potato's days are numbered. Good for you, Katie! Sometimes I add a little avocado or almond butter to my smoothie - the little bit of extra (healthy) fat helps to satisfy hunger, and it's not very many calories. They have mono-unsaturated fats (MUFAs), which our bodies need.

PS - My favorite sweet potato recipe. Combine 3/4 cup cooked sweet potato (mashed) with 1/2 apple, diced. (No need to peel.) Add 2 tsp cinnamon and 1 tsp butter and microwave about 5 min until the apple is soft. SO DELICIOUS! Easy and healthy - no brown sugar needed. Of course you can make a bigger batch. I usually multiply by 4.