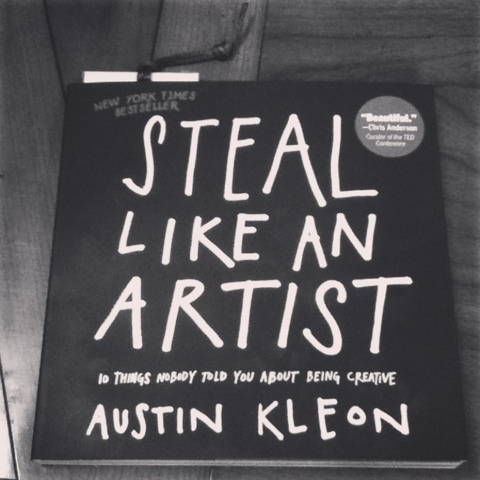 Since 99% of Bryan's t-shirts were originally from the thrift store or the kind that companies hand out for free, I decided it was time to finally buy the man some nicer t-shirts. So that's what he got for Christmas. For the few months leading up to Christmas I checked the clearance racks at Target and Old Navy for shirts I knew he'd like and snatched up any that were $5 or less. The result was that Bryan has been wearing a new shirt every day since Christmas and, if I do say so myself, looking so good.

Believe it or not, Bryan was actually very delighted by his new wardrobe. And I double scored by buying him a new pair of jeans... exactly like his old favorite pair of jeans which he had totally worn to the ground. But just in case he was bummed about only getting clothes for Christmas, I also bought him a book off of his wish list.

It's Steal Like An Artist by Austin Kleon. Mostly I bought it because it was only $8 on Amazon. I honestly didn't put a lot of thought or effort into this gift. I just saw it on his wish list, ordered it, and wrapped it up. (Although I did take a minute before I wrapped it up to put a bookmark on the page that says, "Marry well" and talks about how nobody gets anywhere without an awesome spouse--a.k.a. me, Bryan dear.)

It's a really fast, easy read. In fact, once I started reading it, I kind of wanted to sit and devour it on the spot. As a creative person, it speaks to how I feel about my goals. As a person in general, it speaks truth about being a human being. There's just a lot of simple truth in what he has to say. And reading it is so uplifting and empowering. If you like making things or have dreams about where you want to get with your creativity, I highly recommend it.

Or if you feel like you're at the bottom of the heap looking a long, long way up. Which is often how I feel. And, as such, I always love a good "everybody has to start somewhere" and "it's about growth, not accomplishments" to pick me up and give me another little kick-start.
Posted by Katie Lewis at 10:05 AM

You hooked me, Katie. I just put that book title on hold at the library. :)

Me, too. Sounds like just what I need to get me jumpstarted on my thesis again. Actually, no, I'm done with my thesis. That would be my BOOK. Totally intimidating. Thanks for the tip on this book. I ordered it used from Amazon. (Now when I order used books from Amazon, I always think of down-to-earth real people like you and Bryan.) Love you!