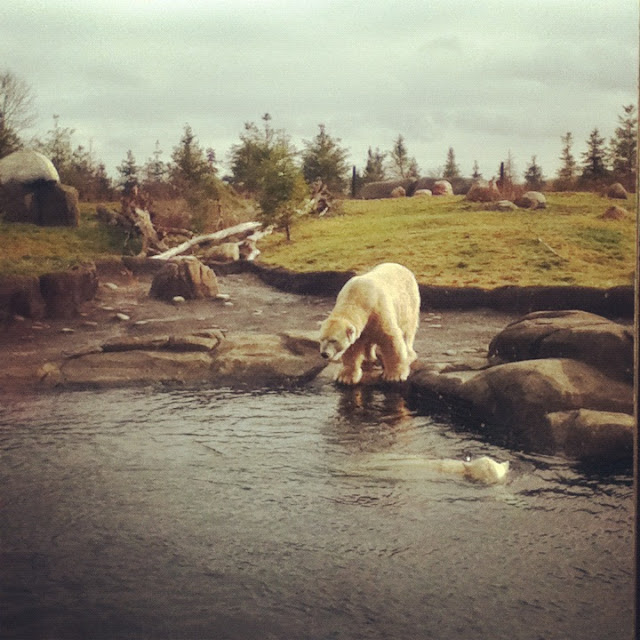 Even though I'm really my own task master these days and, really, I could lay around and do nothing if I wanted (and, let's be honest, sometimes I do), I really have to remind myself to take a day off sometimes. This morning I started out with at least 20 things on my to-do list. I don't really know how many of them got done. A lot of them, but not all. Instead of checking off all those little boxes, Olivia and I had a grand old time at the zoo with some friends. It was (except for someone whining about wanting to be in the stroller and then not wanting to be in the stroller) a really lovely, relaxing outing. Even the bears were at their best!

We're visiting family later in the month and I've been running around trying to fit in all the craziness now so I can rest and relax once we're there. Which, I think, is a good plan. But tonight as I was peddling away on the old exercise bike, planning to bike for the whole movie I was watching, I hit an hour and realized, "Man, I'm tired." So I called it quits, finished the rest of my little exercise routine, took a shower, and got my jammies on. I had big plans to plunk away and finish off a couple more things on the to-do list, but instead I got sucked in to catching up on all the blogs I've been missing for the past several weeks.

Sometimes, even when life is good and everything is fine, I find myself starting to suffocate under all the things I tell myself I have to do. Learning to take a break--and enjoy it--is something I'm slowly getting better at. Today was another step in the right direction.

Anyway, I guess all I'm really trying to say is that, in this season of love and joy and festivities, there is also a lot of busyness and rush and checking off lists and "waiting until ______" until we take a break and relax. But, most importantly, this season is about celebrating the birth of Christ and trying to be more like him. I don't think he'd want us to feel rushed about that.

Anyway, today I took a break and it was nice.
Posted by Katie Lewis at 11:05 PM

I need to show this to Mark so when he asks if my homework is done, I can tell him I wasn't procrastinating, I was taking a well-deserved break... uh, for like 5 hours...

I am also super super looking forward to doing NOTHING at Christmas! (well, not nothing, but you know...)

I think taking breaks are pretty good. Still, exercising for 1 hour instead of 2.5 is still pretty intense.

Good for you. Balance is so important.