First of all, thank you so, so much for your overwhelmingly kind response to my new portfolio blog! I really was so touched by all of your comments here and in e-mails and on Instagram. (I'm @theredkitchenkatie if you want to be friends!) I may or may not have gotten a little choked up every time someone said something nice about it. Which is silly, I guess, but it really is so encouraging to be on the brink of something new and already feel so much love and support from such a wonderful community of fellow creatives. Thank you thank you!

I wish there were already hundreds (or even tens... or fives) of beautiful tutorials there for you to browse through, but, then, it's still the beginning. And, anyway, I was thinking about it this evening and I realized that if I keep posting at least one tutorial a week for even the next three years, then in three years I'll have over 150 tutorials! Won't that be exciting! So, anyway, I'll keep plugging away. So far it's been nothing but fun and challenging in a really positive way.

I think part of the reason it's been so fun is because I've been making so many random little things for no reason at all! Maybe that sounds simple and obvious for someone writing a creative blog, but for so long I've been held back by the (self-imposed) idea that I could only make useful things. Things we need, things I'm going to give as gifts, things for Olivia to wear, etc. And while I think that's a great rule for not overspending on craft and sewing supplies, it's not a great rule for trying to stretch myself and grow creatively.

I know that money is tight for a lot of people, so I'm sure you understand that it's hard sometimes to just mess around with supplies when--gasp!--you could be wasting it! It might turn out to be nothing but a big fat failure! Another messy bundle to toss in the trash! Money down the drain! This is, unfortunately, totally how I feel. I hoard supplies thinking that I'll never be able to replenish the shelves with more goodies. But as I'm learning to loosen my grip, I'm also learning that most failed attempts are the birthplace of really fun and exciting ideas.


Just this past Friday I started to work with one thing in mind, had to completely scrap my first attempt (Craft tip of the day: magnets and fabric are too much for a hole punch.), and ended up making something I've had a lot of fun with... which was not at all what I set out to make. There is something downright wonderful about starting out at point A, working toward point B, and ending up in the Bahamas instead. Don't you think? I sure am excited to share my next project with you. (Spoiler alert: it has nothing to do with the Bahamas.)

For better or for worse, tonight's fiddling around was also somewhat of a failed attempt. In a couple of weeks I'm teaching a little class on how to make these little wooden dollies, so I thought I'd make a mini me as an example. I carefully sewed her little clothes in place. I even added some hair! But, in the end, instead of a miniature me I ended up with this schoolmarm: 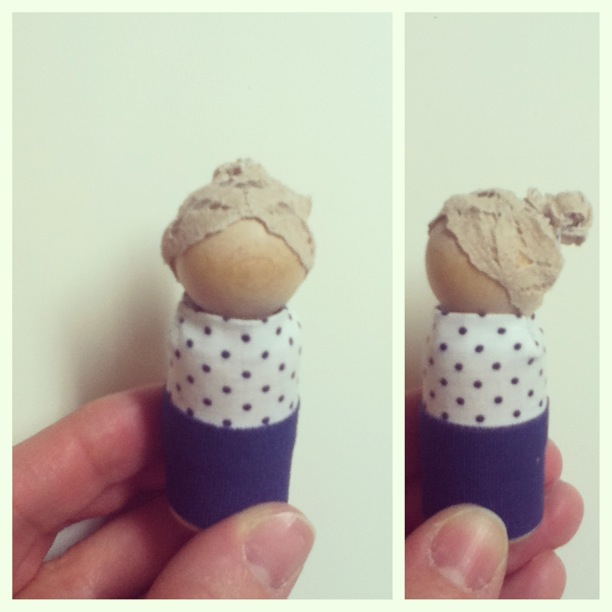 What I can tell you is that beige lace makes for really great old lady hair. Whatevs. If I ever manage one that actually looks like me I'll be sure to let you know. In the mean time, I'm off to waste some more supplies.

Since when is making an "elderly schoolmarm" a waste of supplies!? Ha. I think she's adorable. Maybe she's the granny to Little Red. Or maybe she the start of a whole new storyline. Can't wait for your next post on the new blog (here, too!).

Hahaha...love the school marm. I have the same feeling with supplies, especially fabric. I always want to save my favorites...but what good are they on the shelf? As I've been falling in love with quilting all over again this last year, I've felt like I have to justify making them...which is why most of the extras will get donated to the children's hospital...but the truth is I make them just because I like to.

I have hoarded my supplies. For a long time. And lately I have started with the idea that, I just need to use it. And not worry about it. Because when I use it, and give it away or keep it, it makes me happy.