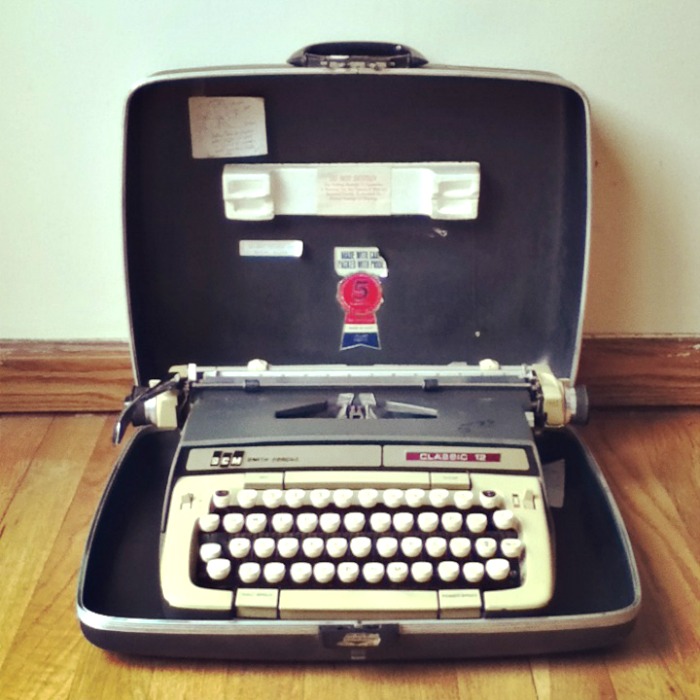 In the grand scheme of things, probably none of you took much notice of the fact that I haven't been babbling away at you here quite as much as used to. If you're anything like me, you look at what's new and don't always think about other blogs until a new post comes up on your list. I kind of hope that's true, because I'd hate for you to be feeling all neglected. Because, in all honesty, the ol' blog has kind of been on the back burner lately.

It's just been one of those times when something has to give and, this time, the thing that gave was blogging. Partly that's because I have been for reals busy with awesome stuff. Like, working day and night, actually busy, kind of busy. But also it's because I've been doing a lot of thinking about blogs. Sometimes I feel like they're slipping away and giving way to Instagram and other click-and-share media. I've actually been thinking about that a lot, lately. I sure hope it's not true because it's hard for me to imagine my life without a blog.

There's that line in the movie Sabrina where she says something like, "I've been taking pictures all my life, long before I had a camera." This, in so many ways, sums up who I am as a writer. I think I've been writing blog posts all my life. In my head, in my journals, in letters to friends. Little blurbs. Silver linings. Relatively unimportant news. I cherish the moments. The little ironies and heartbreaks. Tiny smiles and funny things. And sharing those things here with you is such a joy for me.

Another reason I've been especially quiet lately is because I've been doing a lot of deep thinking. Which, I guess, is really just code for, "thinking about still not being pregnant." Really? I'm still going on about this? Yes. Yes, I am.


A year ago in January I miscarried. After it was removed I went in for a follow-up visit with the doctor and he assured me I'd be pregnant again soon. "Oh, if it's been a year, say, next February, and you're still not pregnant, come back in and see me. But I'm sure you'll be back here again pregnant before too long."

Oh, hello February. How nice of you to drop by. I've only been thinking about you for the past year.

That's all I'm going to say about that. But I will say one more thing about my visit with the doctor today and that is this: having a miscarriage is not the same thing as being pregnant.

I get so tired of having doctors tell me that they're really encouraged by the fact that I've already "been pregnant twice" (one child, one miscarriage). Yes, technically speaking, that's true. But not really in any other way. I've been pregnant. And I've had a miscarriage. And I am here to tell you that they are not the same thing. I just wish the doctors I've seen would be a little more sensitive to that fact. Not a lot more sensitive,  just a little. Just enough that they'd slow down, ask how I'm feeling, and see what I think before they start crossing something off the list and handing out prescriptions. Miscarriages and infertility are such personal things. I wish the doctor would look up from their paper and see me and not just what they're going to say next. End of rant.

As to being in charge of my life, well, I'm not. If this past year has been a lesson in anything, it's been that Heavenly Father is in control, not me. At first, after I miscarried and then wasn't getting pregnant right away like I wanted, I was so mad about it. I wanted things my way. I would say I was praying about it and trying to do the right thing, but really I was just feeling angry. It's my life, after all. Don't I get some say in it?

I've spent a lot of time grieving for the life I always thought I'd have. Lots of kids, a couple of years apart. Full, busy house. Pregnant and moving on into the next phase of life like all of my friends. Of course I could still have more children someday, but, whatever happens now, it will not be the life I would have planned. This, my friends, is a realization that takes some getting over. I'm still working on it.

But the important thing is, I don't feel angry about it anymore. Someday I hope to be able to tell you everything that's in my heart about another big thing going on in my life right now. Because this other thing is huge for me and, really, a dream come true. And I know with no uncertainty whatsoever that it is all happening because of Heavenly Father. His plan. His arranging everything to work out just right. His knowing me exactly and perfectly. And, yes, His timing. More than anything else right now, I've seen the Lord's had in my life in the timing of everything.

I think, in general, we go along in life and only clearly recognize Heavenly Father's influence from time to time. Each time it's like adding a rock to the pile, building a foundation. But then, every now and then, something happens and it's not just a rock, it's a boulder. It's that thing that you look to and say, "Well, look at that. If that worked out, surely Heavenly Father has all of these other little things taken care of too."

It's late and my brain is getting fuzzy, but what I mean to say is this: I know Heavenly Father is the one in charge of my life. And I am so, so grateful for that.

I have so many more things I want to talk to you all about, but this will have to do for now. I hope you all know how much I've missed writing to you here. Maybe you've missed it too? I hope so. Let's not stay apart so long next time, k?
Posted by Katie Lewis at 11:49 PM

Classic Katie. You make me want to be a better blogger. Sometimes I feel like what I'm posting is so "vanilla" so I don't make anyone upset. Thank you for your honest posts. Yes, I've missed them. Your voice matters.

Wonderful, sweet Katie....and a good read. You are so blessed.....you have been given gifts yet to be discovered. Love the fact that you have opened your heart and life to share with us. Because with the sharing in your blog, we all grow a bit. Keep writing, darling.

Love you, Katie! Yeah...we have definitely learned that we aren't the ones in control of timing of kids and such at our house. I look back now and am really grateful we weren't able to have kids right after we got married. And even though in some ways I'm living the life I'd once envisioned...in other ways it's entirely different. Heavenly Father has chosen for me a lot better than I would have chosen for myself...and I'm sure that's what he's doing for you too.

So if you ever want to talk to someone about the fertility medication or infertility, I am really open and always ready to talk about it or listen. No pressure. Let me know.

I loved this post. Yes, I have missed your blog posts lately. Thank you for posting today :) It was beautiful and I hope that soon you are able to have more children.

Don't unplug this blog, Katie. I love your patterns and your craftiness, but I love your writing best.

I love this post in so many ways. I love the third paragraph about silver linings and little letters and journals because I feel exactly the same way. I love the rest because:
1. I feel the same way in so, so many ways. I remember when a doctor was telling me all these things to do and not really seeing me and what was going on in my situation. And I remember being so, so conflicted and confused about the whole thing because well, it ended up not being the right thing for us.
2. I know that Heavenly Father has a hand in our lives too. Thank you for your beautiful testimony of that.
3. I love your little blog! Please keep writing on it! :)
4. SO INCREDIBLY EXCITED FOR YOU!

Oh and thanks for your voicemail this morning. I need to send you an email or something. I will try and call you over the weekend. We may or may not have gotten dangerously close to going over our anytime minutes for the month...that is what happens when a sweet new baby is born! But anyways I'll try to call you when it is free and when a certain cute someone is sleeping. :)

LOVE YOU SO MUCH FRIEND!