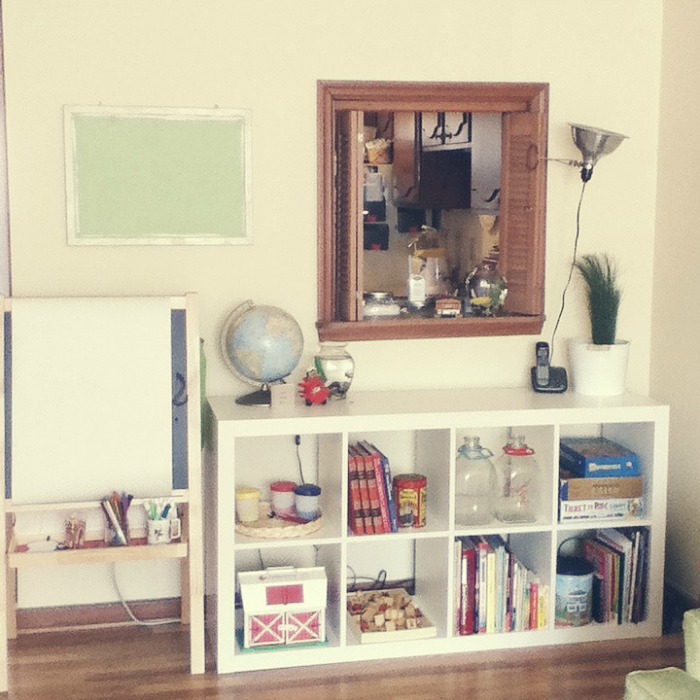 Ta-da! Our spoils from last Saturday's trip to Ikea: another shelf! This is our fourth one. In the same 1500 square foot house. (Don't judge.) Okay, listen, I know that's, like, three more than is probably acceptable, but, seriously, I just can't get enough. They're white! With squares that are just the right size for everything! Swoon.

Someone (ahem) was convinced it was going to take three hours to set up the new shelf (even though we've already done this three times before), so we waited until Sunday after church to set it up. (It only took 20 minutes, by the way.) Then I happily puttered around rearranging books and furniture and toys and games and random little things until it all looked just right. The result: our living room not only feels way more organized, but it also feels much bigger and more open. Score.

In other news,
our fish are still alive. I guess you can't really tell in this picture, but they're there. Olivia (the goldfish) and Tiger (the beta fish) are alive and well in spite of being owned by the worst pet owners in the universe. It's my fault we own them (buying a fish always seems like a good idea... but it's not), but I'm a total slacker and hate cleaning the bowls. Bryan also hates cleaning the bowls, but he takes pity on the fish (and gets tired of the bowls looking super nasty), so he eventually cleans them.

We had some friends fish sit for us while we were gone for Christmas and, umm, we (and by we I obviously mean Bryan) didn't change the water or clean the bowls until, well, yesterday. I won't elaborate on how gross they looked and smelled. Every morning Bryan and I thought (and secretly hoped) that one or both of the fish were dead, but they never actually were. I think after we rearranged everything and set up the new shelf yesterday the rest of the apartment was looking so new and clean that Bryan finally hit his breaking point. He cleaned the bowls. Someone should probably call animal control on us or something, but, hey, Olivia (the goldfish) wasn't supposed to last more than, like, 24 hours, so I'd say 6 months and still going strong is a win, right?

P.S. Almost forgot! You can see more of our living room in these posts:

Love it! I have a super long ikea list at the moment of things for our new house and I am super jealous that you have already been there AND assembled your goods :) And I'm pretty sure having 4 of something you love is ok...when you get 5 we will talk!

I had a goldfish when I was in about 4th grade. We put the tank out in the garage because we were so tired of dealing with it. It got all mossy and I don't think we hardly ever fed it. That fish survived for a very long time. Very long. I still feel guilty about it.