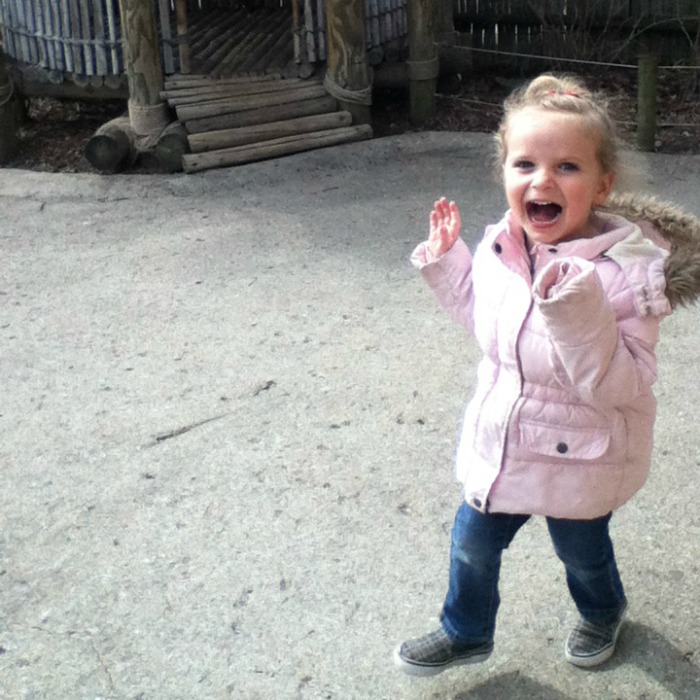 My high school drama teacher and I are friends on Facebook. (What? Aren't you Facebook friends with your high school drama teacher?) Anyway, he commented yesterday that my life right now is probably "a wee bit stressful." And it's because, well, it is. Mostly because I'm writing a book and I've never done that before. My friends smile and say, "So are you on schedule? With writing your book?" and I give them this really boring/rambling answer about how I have no idea if I'm on schedule. With writing my book. Here's where I'm at.

To make a long story short, my editor and I both agreed that it would be a good (and doable) idea to move up my deadline. By, well, several months. The good news is, you'll have this awesome book of mine sooner! The bad news is--ha!--I still have to write it. Bryan says I'm the only one who thinks about that. And I guess that's true. Everyone else talks about my book like it already exists when, really, right now it's just a handwritten notebook full of scribbles and seam allowances and, most recently, a boatload of step-by-step photographs. Wanna buy it? I thought so. :)

Anyway, I am actually very confident that I'll actually write the book and that it will be fabulous (and on schedule!), but, ya know, I need to write it. So I'm working on that. But for the past few weeks what I've been working on is taking all the step-by-step photographs and it's been, ahem, fun. Obviously photography is one of my strong suits (not), so this has been a total breeze (not). But the important thing is, that phase is done! Done done done! Except I still have to sort through and edit a million photos and I have a bunch of other photos to take for the book, but whatevs.

Also, I would like to brag some more about how awesome my husband is. There are plenty of things I could say to brag about him. I could brag about how he just finished this awesome piece of artwork for a contest. Or how he's really good at looking up housing all over the country. Or how earlier today he let me take a nap and just now he washed the dishes. But instead I would like to just brag about two things. 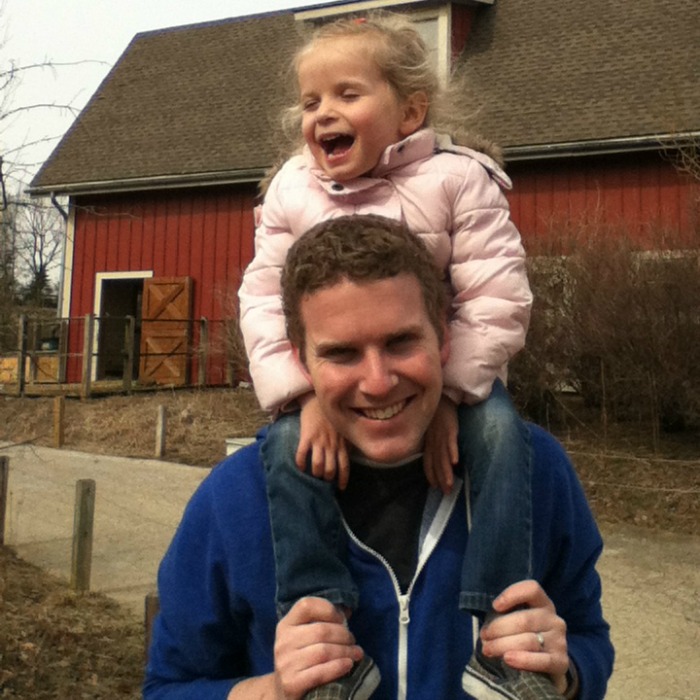 Instead of visiting family and lounging on his parents' comfy leather couches, he hung out with Olivia all week and drove her to and from preschool and made lunches and dinners and washed the dishes a billion times and let me take naps and sleep in. All so I could spend the majority of every single day of his last spring break ever working on my book. It was like one of those fast-forward stop-motion scenes in movies where one character is standing in the same spot the whole time while everyone else speeds around them going in and out and doing a bunch of other stuff. That's basically how I remember this week now, looking back on it. Me standing by our patio door taking step-by-step photos for the book for hours and hours while Bryan and Olivia do her preschool workbooks, watch shows, go to the library, go to the park, make dinner, play outside, build a snowman. Finally, yesterday and today I only had to photograph one project (per day) and I spent the rest of my time with Bryan and Olivia. We went to the zoo and went to visit a nearby town we had never seen. We went to the over-crowded science museum. We didn't go on a single road trip or, for that matter, do anything  really out of the ordinary. But I did indeed meet my weekly goal for book writing. And Bryan even claims (though I think he's lying at least a little bit) that he had a really nice, relaxing week too.

The second thing about my husband which I would like to brag about is this: 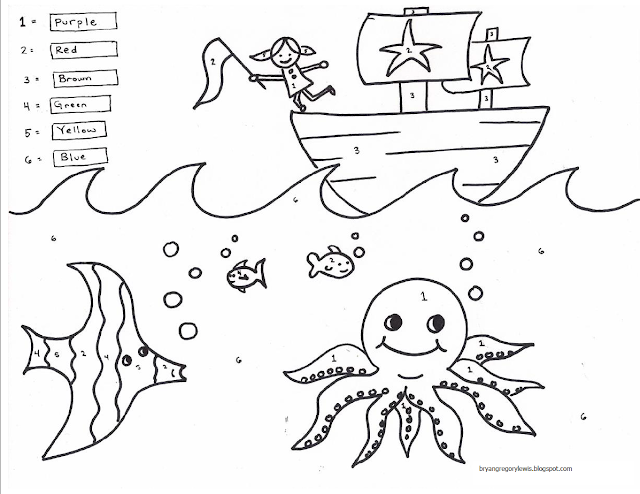 Then yesterday I thought I'd get in on the color-by-number action, so I drew this kitty for her: 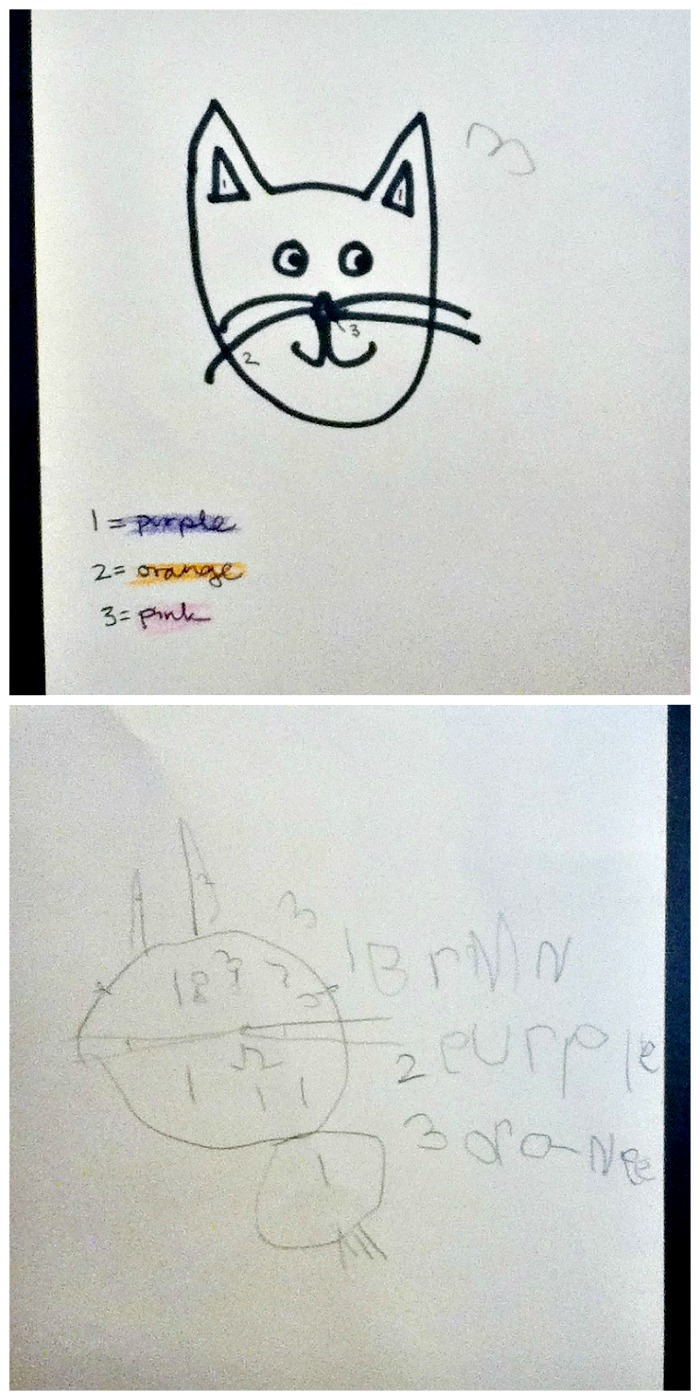 Then she drew me this kitty. :)

I was trying to piggyback on all the love and attention Bryan was getting for making awesome pictures for her color, but obviously it kind of backfired when she drew a better one. The silver lining in all this, however, is that I've been so crazy busy this week that seeing me is such a treat! She's so excited to show me her pictures and snuggle! Okay, actually she still doesn't really want to snuggle. But she does like me more.

And after a week of go go go and total craziness, I admit that I've been thinking a lot more fondly of my regular, non-book writing life. I'm so excited about this book and I feel so blessed to have this opportunity. I'm just sayin', after this is over and I'm done with all of my posh book signings and whatnot, I'm really looking forward to going back to regular life. (But, ya know, now probably with paparazzi.)
Posted by Katie Lewis at 11:13 PM

I love, love following along and hearing this whole process. Your husband is seriously amazing. Mad props!

Not only will I buy the book, I'll buy that cat drawing from Olivia. :D

Good Luck with the book. What an amazing gift others are giving you when they consider the book a done deal. Their belief will buoy you when you need it.