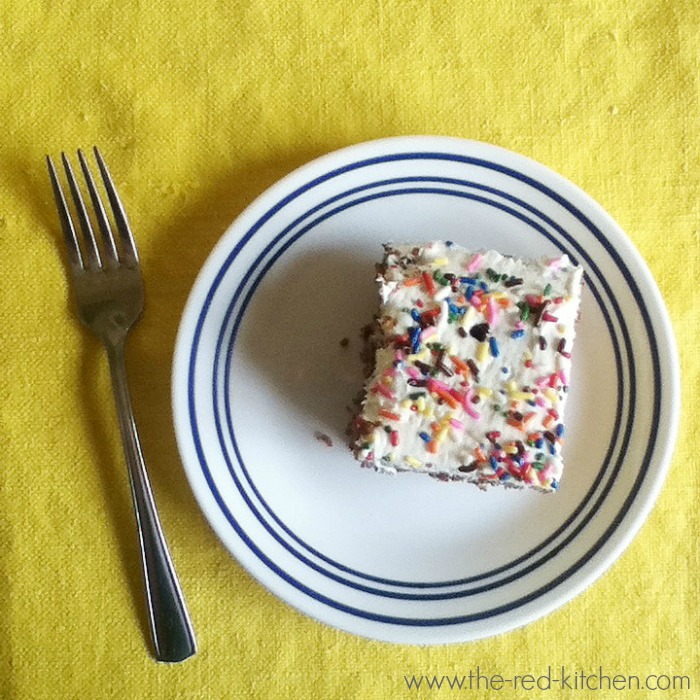 The other day I was on the phone with my 5 year old niece who's currently living in Germany. She told me that all they ever eat is ice cream and cake and pie. Knowing my sister-in-law and her wild ways, this is probably true. So I celebrated by eating cake for breakfast. What a happy way to start the day.

Unfortunately, that was a couple weeks ago. This morning for breakfast I had some pain meds, a prenatal vitamin, and a weird assortment of foods that are easy to chew on only the right side of my mouth. Long story short, I went in for a root canal on Friday and have been enjoying such fine cuisine as go-gurt and squeezy applesauce ever since. Someday I'll be able to eat real food again. Though, in all fairness, I'm already feeling much better than I was on Friday, or even yesterday. So hope is on the horizon.

Some of you may have noticed that I was going on and on about how I am going to get back to blogging... and then left you all by your lonesome for the rest of July. I blame this mostly on the fact that Bryan took over the computer when he was studying for finals and that, once he finished all of his finals, we skipped town and went to visit family in Virginia. And since writing blog posts from my ipod is no bueno, you got left high and dry. Please accept my apologies. Such is the life of a somewhat lazy blogger.

That being said, I really am (at least in my head if not in actuality) back to blogging. And I've been thinking about what that means for me specifically. I'm really looking forward to sharing more tutorials with you again, but, realistically, that will probably need to wait until Olivia goes back to preschool in a few weeks. In the mean time, and throughout, ya know, however long, I've been thinking a lot about how much I just want to share random stuff with you without all the pomp and circumstance of "an official blog post" (dun dun dun). Mostly cuz you guys are nice and I just like talking to you and telling you stuff. Talking at people is, after all, one of my favorite past times.

For the past few months my mother in law has been really good about sending out a weekly email to her children and children-in-law and it's been a really fun, casual way to connect as a family. Often many of us will hit the reply-all so we can keep in touch about all the random little everyday things going on in our lives. There's something really nice about it. And it was in thinking about that that I realized part of what I've been missing most about blogging, which is just talking about life in general. So while I can't promise some profound lesson or a great new crafty tutorial with each new post, I can promise a dose of regular life in the Lewis home. Or at least regular life in my head. :) I don't know yet if these kind of updates will be a daily, weekly, or just sort of a random thing every now and then. My plan is to just go with it and see how it evolves.

Admittedly, this post already feels like too many words and not enough pictures, but I spent so long telling you I was going to tell you stuff and not actually telling you stuff, so here's a random update on our lives right now.


Like I said, Bry had finals (boo), we went to Virginia (yay), and I had a root canal (boo). Now that we're back here at home Bryan has been spending the rest of his vacation playing with Olivia while I lay on the couch and eat things on the right side of my mouth. I've also been working on a lot of things to sell at the craft shows I'm going to be selling at this fall and winter. (More details on those to come, but if you're dying to know, I'm going to be selling at THESE Sept 21 and Dec 21 shows.) I may have spent over an hour yesterday trying to figure out the best way to mount the pom pom garlands I'm selling, but, by golly, those babies are lookin' good now. I've finished making quite a few things, but mostly I've been focusing on getting all the pieces cut out so I can then just sew sew sew. I'm really hoping I don't run out of steam, but I'm still super excited about doing the shows, so that's a good sign.

In other news, Bryan bought a bike yesterday. He's become a big follower of Mr. Money Mustache, which has resulted in his purchase of a bike. MMM is a guy who retired at age 30 and now lives off his savings by living frugally in really practical ways. One of those ways is by biking everywhere, hence the bike that is currently downstairs blocking access to my fabric stash. I'm totally on board with saving money and having my husband get extra fit from riding a bike. Though I must admit, I do worry a little about him getting in a bike accident. He used to ride his bike to campus all the time when we were at BYU, but after a bad accident involving some EFY kids (no, seriously) which led to a broken bike, a ruined helmet (thank goodness it wasn't his head) and an almost-fractured hip, I have been secretly grateful that Bryan hasn't taken up biking again. The fact that the area we live in has no sidewalks and very few bike lanes is also discouraging. But I'm confident that Bryan's good sense (and a lot of prayers for safety) will keep him in one piece. Bryan also has dreams of getting one of those kid bike trailer things and having me get a bike so we can all go out biking everywhere together, but I'm not so sure. These dreams are definitely going to have to wait until after the baby is born and possibly until we move somewhere more bike-friendly. I may or may not also need to re-learn how to ride a bike. (Hangs head in shame.)

I also have some fun news to share about the baby growing inside my body, but I'll save that for another post. Hope you're all doing well. Be good, talk nice, and eat cake for breakfast. It's the German way.

I had my last piece of birthday cake today for lunch. No regrets.

I love these kinds of posts!! Your tutorials and pics are wonderful too, but these fun just life posts are my favorite!! :)

Just sayin', Portland is a VERY bike-friendly city. Be sure to tell Bryan. :)