I Survived My First Bike Ride 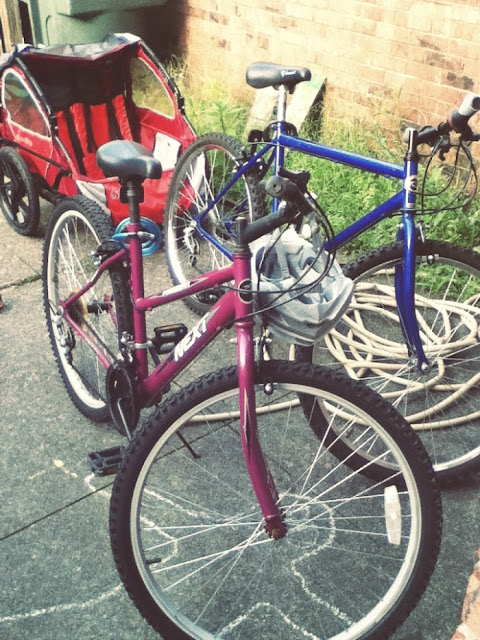 So, last week Bryan bought a bike off Craigslist for $50. He's been riding it around and really enjoying it and talking up how buff and fit he's going to get biking everywhere. We had been talking about eventually getting a bike for me and a kid bike trailer for Olivia and the baby to ride in, but I was thinking we'd get those things maybe sometime next spring or summer. I am, after all, pregnant right now.

I admit I was also harboring some fears about me maybe trying to ride a bike and falling over and getting hurt and stuff. This was probably because the last time I rode a bike was when my friend Lauren and I rode bikes once in college and it didn't go so well. We didn't even get very far, but I was wobbly and practically falling over the whole time. It was rather pathetic. And the last time I had ridden a bike before that was in grade school. Yeah.

But then this morning we went over to a local bike shop so I could figure out what kind of bike would fit me well and, ya know, see if I could even ride one without falling on my face. We talked to the guy at the bike shop and decided a basic lightweight bike was going to be best for what I wanted to do (which was just ride around town and be able to pull a kid bike trailer). He let me take the bike out for a spin in the parking lot and, much to my surprise, I was instantly in love. It was so easy! And fun! And I didn't fall over once!

When we got home I looked up bikes on Craigslist and was lucky enough to find one in good, working condition for only $35. I also found a kid bike trailer in really good condition for only $50. We picked them both up, got a helmet and bike lock for me, and suddenly we were a bike riding family. Woot.

For those who are curious,
I really liked the bike I tried out at the store and I was worried that a used bike for $35 was going to feel like a scummy old bike after riding around on the brand new one for $400, but I am rather pleased to say that I like my $35 bike even more, despite the fact that it's pink/purple which is not really my thing. The one at the store was a bit of a bigger bike, which was fine, but this one is slightly smaller, which fits my body better. So I admit that part of me feels a little bad for testing the bike out at the store and then turning around and buying one on Craigslist instead, but not really since I genuinely like my cheap-o bike better.

This evening after dinner we ventured out for our first family bike ride. We decided to hook the trailer up to Bryan's bike for now until I get a little more stable. Heh heh. She loved hanging out back there and kept saying "Wa-hoo!" throughout the bike ride. I am also happy to report that I didn't fall over once on the whole bike ride. I was a little wobbly at times and I'm basically terrified of looking over my shoulder and losing my balance, but hopefully I'll get more stable the more I ride. I'd love to get to a point where I feel comfortable taking Olivia out in the trailer on my own while Bryan's at school so we can run errands and get around that way. Not only would it save money on gas, but, ya know, then I'll be buff and fit too. Win-win.
Posted by Katie Lewis at 8:39 PM

Hey, hey! Look at you guys! Also, genius idea to look for a bike kid trailer thing on Craigslist. I'm not sure why I hadn't thought of that yet. :) I hope you guys have a safe and fun time riding those bikes!

Stop by the DMV and pick up the drivers' manual - it will probably have a lot of bike info, too. Or maybe Ohio is even cool enough to have a bike manual. In any case, I know from helping Nana study the drivers' manual that there is lots of useful bike info. Just so you're a little more confident about the rules of the road. So glad you are a bike riding family!

http://bicyclesafe.com/ A good read about bicycle safety. I am also a fan of Mr Money Mustache, would love to be a biking family, but have found that there are TOO MANY hills in MD to be towing a 40 lb kid up them... I'm just not strong enough.

Also, you can lighten your bike another 5 lbs by stripping all the paint off of it... My missionary friends all said it made such a difference, plus, then no one would want to steal it... however, it would replace the pink/purple with ugly...

I think it's funny there is a chalk outline of someone under the front tire of that bike! Love,
Granpa Lewis